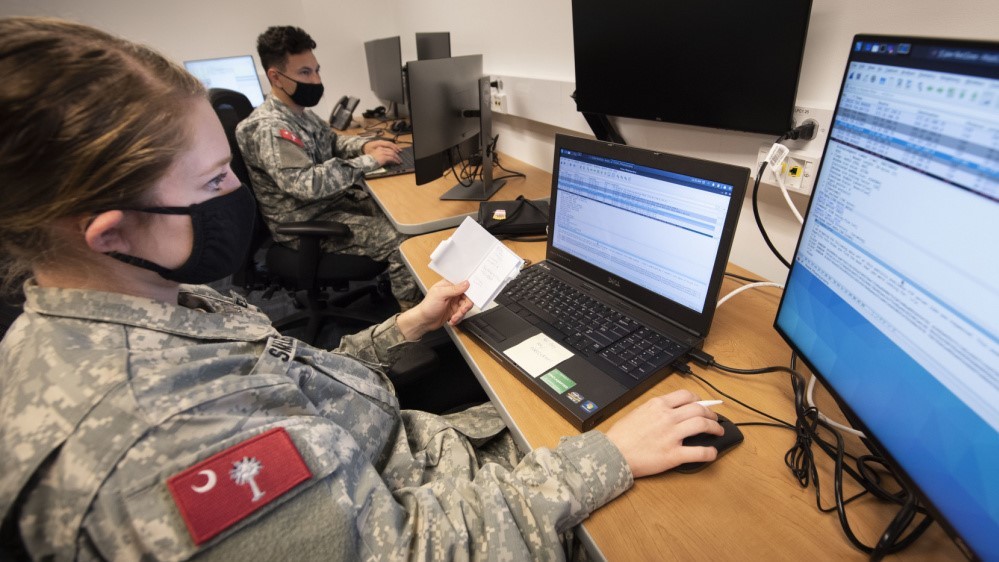 Note: For more information on The Citadel’s Bachelor of Science in Cyber Operations, click here.

As seen on the Defense Visual Information Distribution Hub, by Kris Patterson

Based loosely on the outdoor “capture the flag” game, as well as the board game, “Battleship,” this year’s Cyber Red Zone CTF event was given a maritime twist. During CTF, 35 teams competed in 48-hour time slots to find hidden clues and virtual flags by hacking into mock computer systems. In order to accommodate all the teams of cybersecurity professionals from across the Department of Defense, as well as the three collegiate Reserve Officers’ Training Corps (ROTC) teams, the NCRC held 11 sessions from early October to mid-November with four teams competing concurrently in each session.

“By learning how to thwart an attack, or better yet, seeing how an attacker attacks, it helps cybersecurity professionals design better defenses, which ultimately protects your information and mine,” said Jeff King, NCRC Charleston director.

For the CTF, the flags were assigned point values based on difficulty and each team worked under the pressure of time limits to accumulate points, said Scott West, NCRC Charleston lead event director. The teams with the most points won in their respective event.

As part of the event, West said that the cadets learned new lessons and techniques while solving several of the competition’s more complex challenges.

“We had to learn a lot of protocols, a lot of new skills,” said Citadel Cadet Shiloh Smiles. “We had to apply things used in other areas here in ways that are difficult. I was just trying my best to get information and do some damage.”

Cadets that competed in the NCRC Cyber Red Zone CTF are also recipients of either the National Science Foundation (NSF) Scholarship for Service (SFS) or the DoD Cyber Scholarship Program (CySP).

“These cadets will go on to spend at least three years working for the United States government as cyber professionals, so CTF training really helps to prepare them for future tasks,” said West.

The Citadel cadets expressed their appreciation for participating in the CTF at NCRC Charleston as a chance to reinforce classroom training.

“I don’t think anywhere else could have provided an actual experience like this for us.” said Smiles. “I’m really thankful that I was able to have this opportunity.”

The NCRC CTF event offered a similar experience for Marine Corps cyber professionals to practice and sharpen skills in a realistic training environment.

“Members of the MCOTEA team use these types of events to maintain proficiency,” said King. “MCOTEA is the independent operational Test & Evaluation authority for the Marine Corps and is responsible for the operational and cyber testing of products that NIWC Atlantic builds prior to them going to warfighters.”

While the networks and systems in the CTF are simulated, the technology represented is common to many of the systems actively being developed, tested, and fielded across the DoD, said West.

The Charleston facility is one of two OSD R&E resourced Navy cyber test and training range facilities, with NCRC Patuxent River as the second facility.