A Citadel Homecoming special: getting to know the Regimental Commander 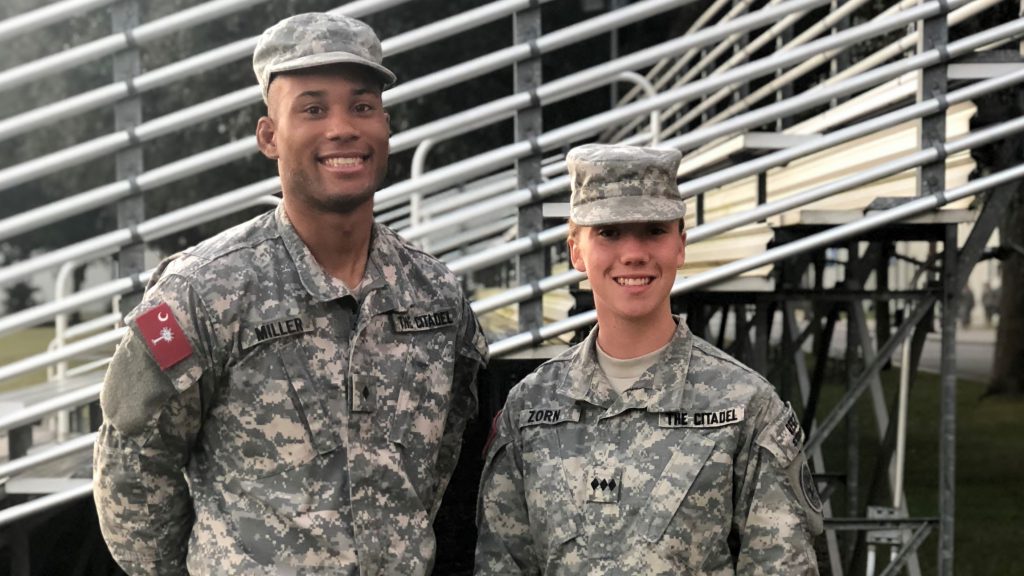 Each homecoming season, the Regimental Public Affairs Officer (PAO) meets with the Regimental Commander for a conversation that helps The Citadel community get to know the cadet colonel who is leading the South Carolina Corps of Cadets.

Recently, Cadet Logan Miller, The Class of 2019 PAO, asked Cadet Col. Sarah Zorn, the regimental commander, a few personal questions about her personality, her life, and her leadership philosophies.

Zorn, who holds three black belts in different karate disciplines, spent much of her life growing up in Zephyr Hills, Florida. She moved to the Aiken area of South Carolina as a teenager where she developed a love for working on cars. Zorn is a Business Administration major, and attends The Citadel as a four-year U.S. Army ROTC scholarship cadet who will earn a commission to become an officer upon graduating in May of 2019. She hopes to become an intelligence officer.

LM: What inspires you?
SZ: Children, and how they are fascinated by the simple things in life.

LM: As a child, what did you wish to become when you grew up?
SZ: A veterinarian (laughs). Somehow along the way I decided Business Administration was a better fit if I was going to have a military career.

LM: Describe a real-life situation where you stood up for someone or something.
SZ: When I was a kid, about eight years old, I got into a fight with my neighbor because he said “girls can’t drive big trucks.” He kept pestering me and bothering me about other things he said girls could ‘t do. I vehemently objected and proceeded to punch him right in the nose. My mom was going to ground me until his mom said that I was just defending myself and that he got what he deserved.

LM: What do you work on during your free time?
SZ: My physical fitness and literary appreciation take priority. So essentially I really like to work out and practice karate. I don’t necessarily like to read but I know it is important so I’d like to increase the time I spend reading. Also, the car I have now is pretty much a constant lesson in mechanics.

LM:  Who influences you the most at this stage of your life?
SZ: My cousin Allen. I really only got to know him in recent years, but he is the big brother I always wanted and I’m the little sister he never had.

LM: What is the funniest thing that has happened to you recently?
SZ: My cousin’s reaction when we proposed the idea of going on a cruise to him. He sternly objected. His reasons, “They don’t have brakes.” When we argued that there is nothing in the water to hit, his response yet again was, “Yeah, that’s what they thought on the Titanic too but those guys went out and found the only thing to hit in the entire Atlantic Ocean. NO!”

LM: Why did you choose to attend The Citadel?
SZ: At the time I applied, I wanted to stay in South Carolina, earn an Army commission to become an officer, and major in engineering. The Citadel offered everything I was looking for.

LM: As Regimental Commander, what are your goals for the Corps of Cadets?
SZ: My goal is to help my fellow cadets be as prepared as possible to become the principled leaders of tomorrow. The goal for all of us is to be engaged citizens, who are physically, mentally, and intellectually fit and prepared to lead others through the problems of our world today.

LM: Describe you leadership style.
SZ: The human element is the most important. Take care of your people above all. Life happens, but our people are how we make it happen.

LM: What is the hardest thing about being the Regimental Commander?
SZ: I’m convinced I think 24/7. My brain never shuts down.

LM: What advice would you give the incoming freshmen at The Citadel?
SZ: Don’t quit – you’ve got this. It is very worth the effort and you’ll forever be thankful that you stuck with it after you earn your ring.

LM: What do you consider your greatest achievement and why?
SZ: Being able to forgive and to love others. It’s something that I can strive to achieve every day.

LM: What lessons has this school taught you thus far?
SZ: Don’t give up, tomorrow will be better. Be kind. Ask questions. Depend on others.

The moral of this story is that life gives us nothing but opportunity, and it is our choice as to whether or not we take it. Sometimes opportunity only knocks once, and sometimes it doesn’t knock at all, and we must seek it out. Cadet Col. Sarah Zorn, Regimental Commander of The South Carolina Corps of Cadets

Read an article authored by Zorn in The Citadel Magazine online here.

Cadet Logan Miller is the regimental public affairs officer for The Citadel Class of 2019. He is from Kannapolis, North Carolina, is majoring in exercise science, is an honors student and is a member of the varsity track team.