Cadet Col. Sarah Zorn has been in the spotlight since she became the first female regimental commander of the Corps of Cadets. Behind that historical benchmark lies a remarkable young woman with a resonating story about overcoming adversity and climbing to the top through resilience and determination.

Cadet Col. Sarah Zorn has been in the spotlight since she became the first female regimental commander of the Corps of Cadets. Behind that historical benchmark lies a remarkable young woman with a resonating story about overcoming adversity and climbing to the top through resilience and determination.

From Pilgrims on the Mayflower to immigrants at Ellis Island, America was founded on a dream.

A dream of freedom, prosperity and good fortune. A place where possibilities are endless and life is promising. This ideal blossomed into what is known as the “American dream”—the notion that anyone from any background can achieve anything through hard work and determination. I believe the American dream is still alive and well, beating in the hearts of every one of us. I believe this because I have been fortunate enough to live my own American dream.

As a young girl, I waited daily for my grandfather to get home from work and take off his worn, dirty work boots so I could walk around the house in them, hoping one day to fill his shoes. I would climb into his lap and ask, “Why are you so dirty, Pop-Pop?” His answer was simple: “I had to go to work today, Sarah Jean.”

It was only a few short years later that I was lacing up a pair of my own work boots, following him around on job sites, toting materials and fetching tools as we worked in the hot Florida summer. I looked forward to my pay that came at the end of every day and the fruit of a hard day’s labor—the taste of a cool lemon-lime Gatorade. I learned many life lessons traveling in the white work van that smelled faintly of plumber’s glue and stale cigarettes. Lessons of honesty: “Be honest with your customers, Sarah Jean, and they will be honest with you.” Lessons of business: “Your best advertisement is word of mouth. Do a respectable job, and your business will spread.” Most importantly, lessons of humanity: “Remember the Golden Rule—do unto others just as you would have others do unto you.”

Pop-Pop’s lessons have stuck with me, and I find myself thinking about what they taught me. And, perhaps more importantly, how I can pass them on to help others.

As a stay-at-home mother and disabled veteran, my mother knew she would not be able to help me financially with college, but she had ambitious dreams for me and nurtured my thirst for knowledge early on. Even before I was born, she ordered a complete set of encyclopedias. As the mail carrier delivered the packages, she jokingly asked, “Has that baby graduated college yet?”

My mother spent countless hours reading to me, and once I started school, she made sure I could research and answer my own questions. If I ever asked the definition of a word, her standard response was, “Go look it up.” And begrudgingly, but obediently, I plodded to the dictionary or the encyclopedias to find the answer.

As a young child, I did not understand the difference between gaining knowledge and simply knowing facts, but the pursuit of knowledge stayed with me. I worked hard and challenged myself in school. I often made the honor roll and always strived to do my best. I realized that if I wanted to be successful, college was my best option, so grades were important. Little did I know that my college experience would be vastly different from that of most others my age.

There’s More to the Story

My life took a drastic turn when my mother passed away. I was 16, too young to live on my own, so I chose to move to Aiken, South Carolina, to live with my aunt and uncle. It was in Aiken that my future began to take shape and all the puzzle pieces began to fall into place.

When I arrived at Midland Valley High School, making friends was not something that came easily to me. I was quiet and dutiful in my schoolwork as I had always been, and I wasn’t good at making small talk. Many of the students thought I was rude, and they did not try to talk to me. I was threatened with detention on my first day for “not abiding by the dress code and skipping lunch,” even though I knew nothing of the dress code or that skipping lunch was even an offense. Despite the rough start, I began to make friends over time. I built a strong relationship with my Junior Naval ROTC instructors, who took a special interest in my success at Midland Valley. As my junior year came to an end, Warrant Officer Seim, my Navy Junior Reserve Officers Training Corps instructor, asked me what my post-graduation plans were. When I told him I wanted to go to college but did not have a way to pay for it, he said, “Don’t worry about college; I have something for you.” He explained about ROTC scholarships and encouraged me to apply.

About five months after I sent in the Army scholarship application, I received notification that I was a four-year national scholarship recipient. Only about 10 percent of the ROTC scholarships awarded nationally cover the full four years of college. After accepting the scholarship, I needed to decide which college to attend. At the time, I wanted to pursue mechanical engineering and stay in state, and I knew that I wanted to pursue an active-duty commission after graduation—The Citadel seemed like the right choice.

Matriculation came quickly, and soon I was standing outside third battalion as parents and knobs quickly bustled by. My entire world was spinning as I nervously reported to my first sergeant. I remember trembling as I tried to grab my box of initial-issue items, sign for my room key and gather my thoughts as I was swept away into this new and evolving world.

My time at The Citadel has been a once-in-a-lifetime experience. I’ve faced challenges that have only developed me into who I am today.

I struggled slightly with the mental challenge of physical training, or “PT” as we call it. I eventually found it within myself to say “Yes, you can,” instead of “No, you can’t.”

I learned many lessons, one of the most important—if you give 100 percent effort 100 percent of the time, people will most likely leave you alone. I always tried my best, even on days when I did not want to, and that lesson even transferred to my accomplishments within Army ROTC. I look back fondly on Recognition Day, a day of intense physical training that signals the end of the fourth-class system. I remember the PT and my classmate Noah Harvey-Fonvil encouraging me through our final victory lap. I remember the bagpipes and the famed final pronouncement: “The fourth-class system is no longer in effect.” Ironically enough, I don’t remember a word the regimental commander, Jimmy Urban, said. I will keep that in mind when it comes my turn to give the same speech. I can do nothing but be thankful for knob year, The Citadel and all the experiences I’ve had here. My life wouldn’t be the same without them.

I eventually found it within myself to say 'Yes, you can,' instead of 'No, you can't.'Click To Tweet

My sophomore year was somewhat of a blur, so much so that I’ve come to call it a lost year. I was a squad corporal. I deeply cared for the knobs that I trained and mentored. One was Jennifer Pozzani, who was going through a challenging time in her life just after losing her mother. I could feel her grief—I knew what it was like to lose a parent and how difficult it can be to mourn and continue day to day, especially at The Citadel. I wasn’t sure Pozzani would return after Christmas break, and when she did, I knew she was capable of great things. Today she is serving as the company first sergeant for Hotel Company. We became so close that she asked me to help her with her class set on Recognition Day.

Junior year was a year of resilience. I served as first battalion sergeant major for a little over three months before assuming the position of regimental sergeant major. In this new role, I learned to lead my peers and hold them accountable. I worked directly with the Commandant’s Department to execute the daily operations of the Corps of Cadets. There were many times when I was so stressed that I leaned on my peers. I often sought out the guidance of the regimental commander and regimental executive officer, Dillon Graham and John Cordes. I learned through experiences that were unique to The Citadel, such as participating in the West Point Leadership and Ethics Conference and being a member of The Citadel Leadership Development Council. The most important advice I could give to anyone in this position is: do your job, and do it well. Don’t forget you’re still in college. Don’t be afraid to make mistakes. Learn from them and enjoy the company of your peers—you will only get to do it once.

As my junior year was ending, I chose to apply for regimental commander. After a long board review and interview process, I was chosen. The support of cadets, faculty, staff and alumni who all offered their support and advice was overwhelming. The best feeling I had was when I called the Corps of Cadets to attention for the first time at the Long Gray Line parade, and the Class of 2018 stood behind me and cheered. It was then that I realized how special this one-square-mile campus on the banks of the Ashley River had become to me. The buildings will fade with time, but the Long Gray Line will stand forever within the hearts of the cadets who appreciate it as much as I do. I can only hope that I can give back as much as I have been given. God bless the Long Gray Line.
In my time at The Citadel, I have built friendships and relationships that will last a lifetime. I have learned lessons that built upon the values I was taught when I was young. I learned to count on others and work as a team to succeed. Similarly, I realized that my determination and academic successes had been fostered all along by my mother in her need to inspire in me a lifelong pursuit of knowledge.

The moral of this story is that life gives us nothing but opportunity, and it is our choice as to whether or not we take it. Sometimes opportunity only knocks once, and sometimes it doesn’t knock at all, and we must seek it out. We are all capable of greatness if we are willing to visualize the goal and work for it. Our dreams can become a reality, and this reality is the American dream—the dream that lies within our hearts, that beats throughout this nation, that stands true from generation to generation. This dream isn’t only my dream, it’s our dream, a vision for a better future and an opportunity for everyone to pursue their own American dream.

After all, as Walt Disney reminds us, “If you can dream it, you can do it.”

Cadet Colonel Sarah Zorn currently serves as the regimental commander, the highest-ranking member of the Corps of Cadets. She made history when she became the first female cadet to hold that rank. A senior business administration major originally from Zephyrhills, Florida, she holds three black belts in different disciplines. In her spare time, she works on cars with her family. 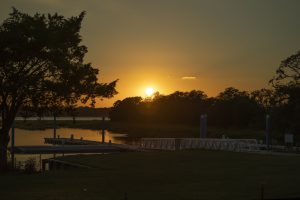 On the Banks of the Ashley