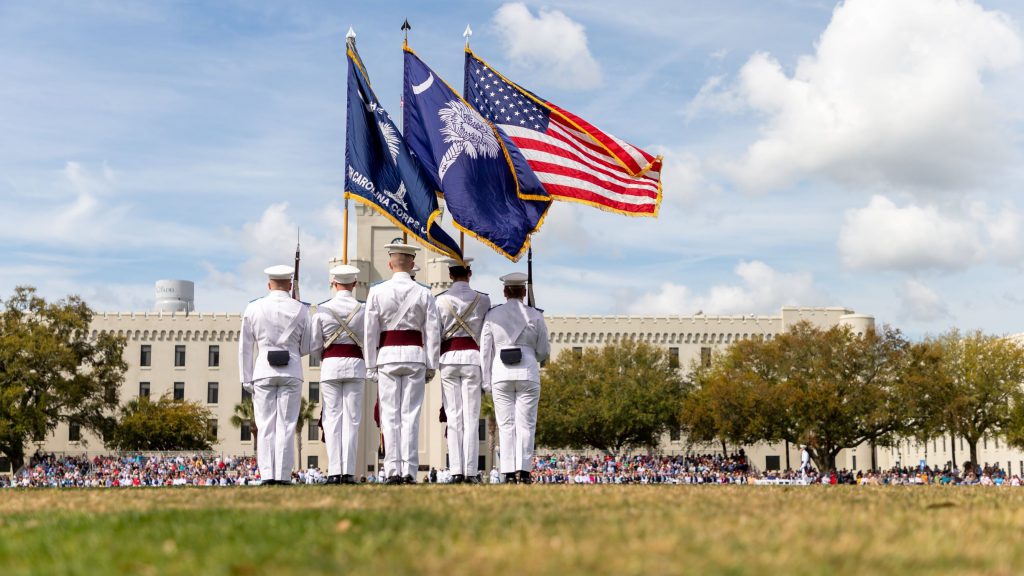 Massing of the Colors

On the first Sunday of the month at 3 p.m., the local chapter of the Military Order of the World Wars (MOWW) will hold the Massing of the Colors in Summerall Chapel, on The Citadel’s campus.

It’s a patriotic ceremony, held to help attendees rededicate themselves to their faith in the colors of the United States and other participating organizations, as well as to pay tribute to the service personnel those colors represent.

MOWW chapters conduct Massing of the Colors throughout the United States and Puerto Rico. These ceremonies usually involve color guard units from a variety of military, public and private institutions.

The Society of the Massing of the Colors first held a patriotic ceremony on Armistice Day in 1922. MOWW inherited the responsibility for conducting this event across the country in 1927 when the original sponsoring Society faded away.

The Citadel Symposium on Southern Politics

Just in time for election season, the Department of Political Science will host The Citadel Symposium on Southern Politics. It’s the largest and most comprehensive conference for the presentation and discussion of scholarly research on the contemporary politics of a specific region in the country.

The Symposium has been held biennially, in even-numbered years, on the campus of The Citadel since 1978. Since the first conference, political scholars from around the world have presented research relevant to political trends in the southern United States.

Registration is $100 for faculty and $50 for undergraduate or graduate students. Registration includes lunch on Thursday and Friday. For more information on the symposium click here.

On Thursday, March 5, at 6:45 p.m., Professor Marcia Yonemoto of the University of Colorado, Boulder, will present a public lecture entitled “Murderous Daughters as ‘Exemplary Women’: Filial Piety, Revenge, and Heroism in Early Modern and Modern Japan.”

The Citadel Cadet Chorale is an auditioned choral ensemble, and is comprised of 18 cadets who come from a variety of backgrounds and areas of study.

Their spring 2020 tour will include something for everyone to enjoy, including: Mozart’s “Ave Verum Corpus” and audience favorites “Down In The River To Pray” and “The Prayer.”

The Citadel Cadet Chorale’s tour will include:

For more information on The Citadel Cadet Chorale, click here.

In this adaptation of Neil Simon’s classic coming-of-age play, Biloxi Blues tells the story of young Army recruit Eugene Morris Jerome as he travels from Brooklyn to Biloxi, Mississippi for boot camp during World War II.  On his quest to find love, achieve fame and attain his manhood, Eugene is joined by a diverse band of questionably-talented recruits, an old-school drill instructor, an enterprising prostitute and a local sweetheart.

In addition, to launch the partnership with SOBTC, Citadel president Gen. and Mrs. Walters will host an opening night VIP reception at 5 p.m. on Friday, March 20 at Quarters One, their campus home. Director Bob Luke and alumni cast members from the 1988 Citadel production of Biloxi Blues will be among the honored guests. The $50 ticket includes the reception and reserved seating at the show that night.

The conference will include dinner, presentations, awards, a journal signing and cake cutting. Free copies of the journal will be available for signing.

The featured speakers will be the published authors from the 2020 Gold Star Journal. Papers published in this year’s edition include:

Ryan is the author of:

The Friends of the Daniel Library and The Gold Star Journal are co-sponsoring this event. This year’s edition features eight cross-disciplinary papers written by some of The Citadel’s best and brightest undergraduate and graduate students, with many photographs taken by students.

Members of The Citadel community can register here.

March 25 – 27
The Citadel campus
Registration required; open to the media

The symposium, planned by the college’s Krause Center for Leadership and Ethics features leadership learning opportunities through distinguished leader panels presented by The Citadel’s five schools, presentations by notable speakers, and high-impact presentations by cadets and students on their research, civic engagement, and international education experiences.

For more information on the speakers, or to registration for the event, click here.

The Citadel Academy of Science and Mathematics Awards Banquet

Alumni and faculty to be honored at this year’s banquet will include:

Tickets to the banquet, which includes dinner and an open bar, are $100 and can be purchased by clicking here.

Friday, March 27 and Saturday, March 28
The Citadel campus and Marion Square
Select events are open to the public

Celebrations for the 177th birthday of the South Carolina Corps of Cadets and Recognition Day will be held on the same weekend again this year.

Recognition Day is when freshmen cadet candidates are officially recognized as members of the Corps of Cadets after months of rigorous training exercises.

That process begins with what is known as The Gauntlet on Friday, March 27, and culminates with a march to Marion Square and the iconic Freshmen Oath Renewal Ceremony on Saturday, March 28. It is one of the most important events in the life of a cadet.

Corps Day is the birthday of the South Carolina Corps of Cadets, and is one of the most highly attended weekends at The Citadel. Attractions include dress parades, awards presentations, special cadet performances and athletic events.

It’s just like the TV show “Jeopardy!” except all the clues are math problems.

The Citadel Math Jeopardy contest will be held at 6:30 p.m. on Tuesday, March 31 in 117 Grimsley Hall, on the college’s campus. Topics for the contest include things like “Astounding Areas,” “Dazzling Derivatives,” “Approachable Limits” and more.