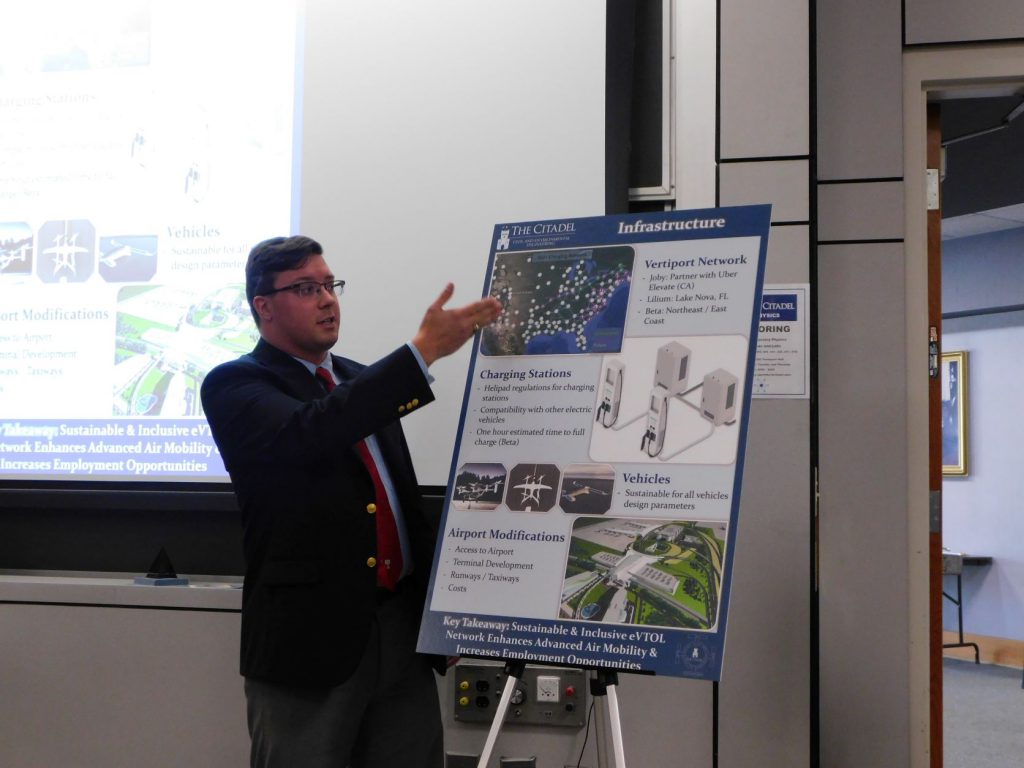 As cadets explained to an audience recently in Grimsley Hall on The Citadel campus, there will be a time in the not-so-distant future when electric vertical take-off and landing vehicles (eVTOLS) will commonly deliver cargo, and even people, to airports around the region and the nation. But America’s airports must be modified to support eVTOLS.

That’s where six seniors who are majoring in civil or construction engineering enter the picture. The cadets are designing the ground infrastructure, including vertical landing ports or vertiports, needed at regional airports to accommodate this rapidly developing industry.

“We are working on a design for the Rock Hill-York County Airport that we hope will serve as a case study that is transferable to other similarly sized airports, and beyond,” explained Cadet Davis Smith.

The cadets on the capstone project include Kyle DiLiddo, Ben Kicklighter, Aidan Puzzio, David Smith, Noel Turner and Matheson Wannamaker. They presented details on the eVTOL market and projected impacts on the South Carolina economy to Congresswoman Nancy Mace, ’99, one of the college’s most well-known alumni who is a member of the Congressional Transportation Committee. In addition, industry experts and partners were in the audience.

Leading the cadets through this real-world project is a 1982 alumnus who graduated with a degree in Civil Engineering and worked for Gulfstream Aerospace for 35 years. Dan Nale, PE, the visiting Professor of Practice with The Citadel Department of Civil and Environmental Engineering believes this capstone project will give the seniors professional-level experience that can help catapult them ahead of other when they graduate.

Nale said it is estimated that “by the year 2035, the Advanced Air Mobility industry utilizing the EVTOLS is expected to have a $115 billion annual impact on the American economy.”

Mace, who congratulated the cadets on their work thus far after the presentation, asked how much the airport retrofitting program the cadets are creating would likely cost. Nale outlined details of an estimated of $2 million investment.

The cadets intend to have the Rock Hill – York County Airport eVTOLS modification plan complete by the time they graduate.