The Class of 2024 reports to campus 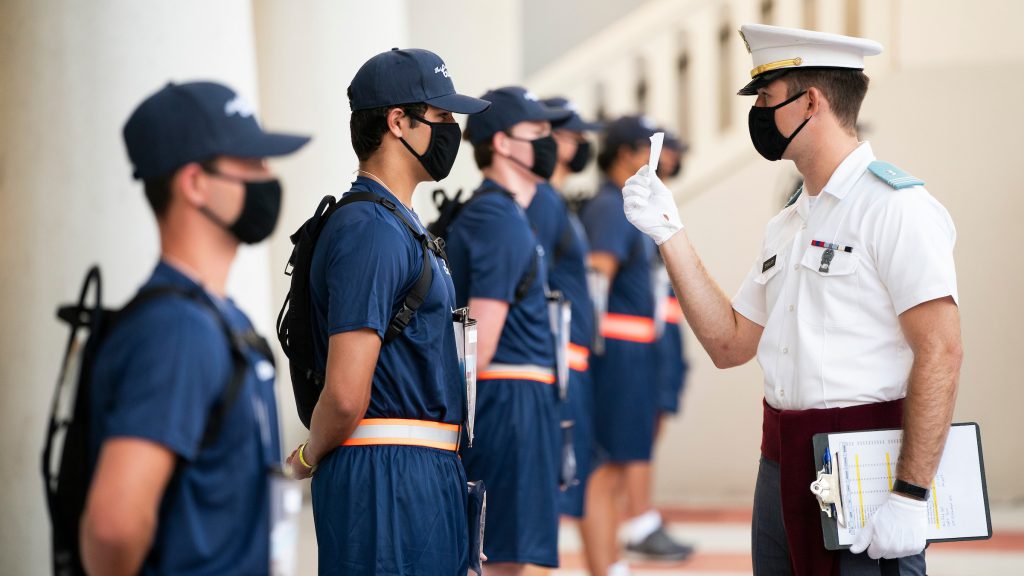 “Matriculation Day for me meant becoming a new person.”

The Citadel is welcoming the full Class of 2024 after cadet-recruits reported to campus throughout Saturday, August 8.

From 7 a.m. – 7 p.m., the new freshmen joined more than 600 cadets who were already on campus, having returned on a phased schedule to begin athletic training and prepare to train the new knobs.

The Matriculation Day process is usually completed in about two hours, but was stretched out to twelve this year to ensure social distancing and to limit the number of people on campus.

It’s the largest step — and one of the most important — in Operation Fall Return 2020.

“We’ve been working on this and preparing for this day for months,” said Col. John Dorrian, USAF (Ret.), the vice president for Communications and Marketing at The Citadel. “The final pieces have been put in place to make sure that we can have everybody back and protect everyone’s health and safety.”

Members of the Class of 2024 arrived on campus, said their goodbyes to their family and had their temperatures checked — and then the knobs began their processing.

After an initial stop in the barracks, where they receive their room assignments and physical training uniforms, the cadet-recruits traveled in small groups to Mark Clark Hall, where they got haircuts, their mailbox keys and were fitted for dress uniforms. After, they visited the cadet store to get necessary equipment.

“I think the most important thing that they will be learning is their ‘why’ and their reason for being here,” said Samantha Walton, the Regimental Public Affairs non-commissioned officer. “As a cadet you’ll learn that you’re always asked why you decided to come to The Citadel and I believe that it changes throughout your cadet career, whether you’re a freshman or a senior.”

Throughout the process, the cadet-recruits began to receive their military instruction from cadre, the group of upperclassmen tasked with training the knobs. Through masks, there was at least one new cadre command — “keep six feet apart.”

The next step in the knobs’ Citadel career is Challenge Week, when cadets are introduced to the Fourth-Class System and receive rapid military training — learning how to wear their uniforms, drill, clean their rooms and barracks, and become familiar with the campus.

“When you’re a member of the Corps of Cadets, you develop camaraderie with your classmates that’s really unlike anything you’d see at any other institution,” said Dorrian. “You go through hard times together, you overcome challenges together, you learn teamwork together, and those profound impacts will follow you all the rest of your lives.

On Monday, the class will stand on Summerall Field and take an oath pledging to abide by the college’s core values of honor, duty and respect as future members of the South Carolina Corps of Cadets.

The freshmen Oath Ceremony will be livestreamed on Facebook Monday, Aug. 10 at 4:30 p.m.

The remainder of the South Carolina Corps of Cadets will return to campus by August 16.

Any parents, knobs, cadets or students with questions about Operation Fall Return and COVID-19 protocols can find Frequently Asked Questions here, or use this form to send a question.