The Citadel Fought the Admission of Women. Now a Female Cadet Will Lead the Corps. 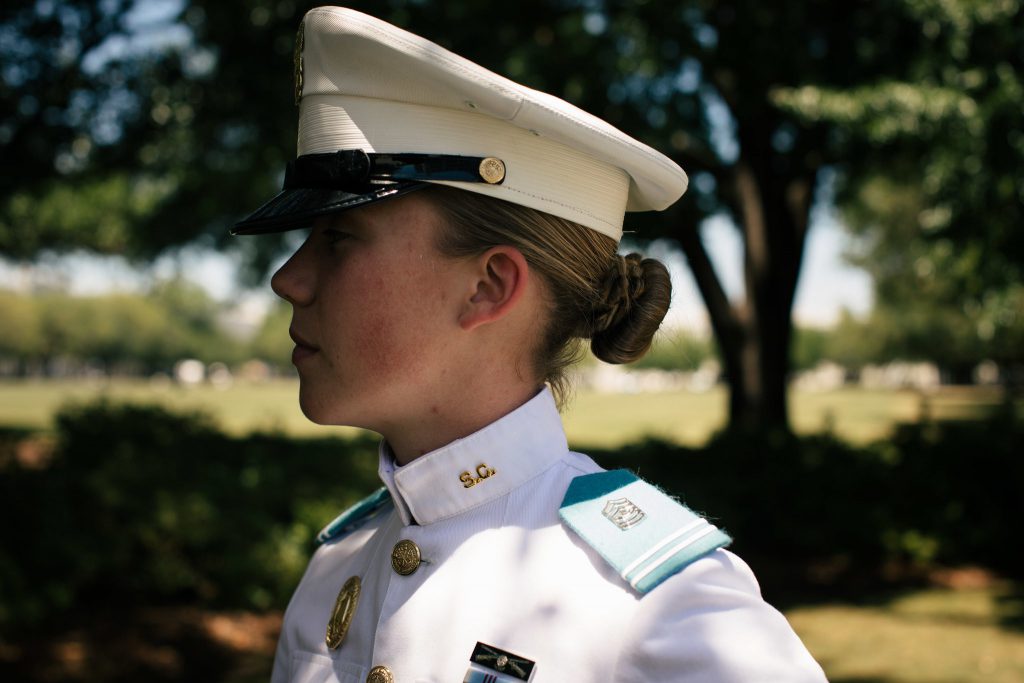 As seen in The New York Times, by Richard Fausset and Alyssa Schukar

When Sarah Zorn applied for admission to the Citadel four years ago, she had not heard the story of Shannon Faulkner, the first woman to gain full admission to the famed Southern military college.

Ms. Zorn did not know about the two-and-a-half-year legal battle that had forced the college to accept her, or the death threats, or the sexist epithets spray-painted on her parents’ house, or the federal marshals who escorted Ms. Faulkner to campus on her first day as a cadet in 1995, or that she had dropped out a week later.

She knows now. But the 21-year-old college junior believes that the 175-year-old South Carolina institution that once fought admitting women as if they were an invading army has made its peace with the idea.

And her accession on Friday as the Citadel’s first female regimental commander — the top cadet — is her proof.

“I think that women are fully embraced as cadets here,” Ms. Zorn said in an interview. “You hear a lot of times from fellow cadets, and even from alumni, that having women here has even improved the college.”

On Friday afternoon, Ms. Zorn, in a dress uniform and a black shako, officially took over the post during the Citadel’s pomp-laden graduation parade, known as the Long Gray Line. As the college’s 2,400 undergraduates stood at attention, she received, with great formality, a gilt-handled sword from her predecessor, Dillon Graham.

There was no announcement that she was making history. But nearly everyone present recognized a sign of irrevocable momentum in a long process of change.

“It says we can,” said Catherine Hill, 18, a freshman whose father graduated from the Citadel in 1990. “It says we can be with the guys — that we can do this.”

Citadel officials acknowledge today that the ugly reaction to Ms. Faulkner, which made international headlines, was a deep embarrassment to the institution. They also concede that the college moved too slowly in the years that followed to accommodate the women who came after her.

“I don’t think our story was good for the first — I’m just going to throw it out there — 10 years or so,” said Geno F. Paluso II, a 1989 Citadel graduate and retired Navy captain who serves as the Commandant of Cadets.

Now the Citadel, one of the few state-supported military colleges in the country, is eager to promote a different story: that women are welcome and in many cases thriving on campus.

“I will tell you that I’ve only had one negative phone call” from an alumnus about Ms. Zorn’s selection, Mr. Paluso said. “It was pretty easy. I called the guy a Neanderthal. Then I educated him on how there’s no all-male military institutions, there’s no all-male corporations in America — I mean, come on. It’s 2018. She’s the best qualified cadet. So get over it.”

According to college officials, women make up 10 percent of this year’s 516-member graduating class, and 9 percent of all undergraduates. Including this year’s crop, the Citadel has graduated 475 women since 1999. Officials say that on average, female cadets maintain a higher grade-point average and are more likely to graduate then males; 75 percent of women go the distance.

For many years, anyone able to survive the Citadel’s notoriously grueling four-year undergraduate program has been accorded special respect in the South. It begins with a freshman year in which new students, called knobs, are put through an intense period of what the former military personnel who instruct them call “the infliction of artificial stress,” a boot camp-style effort to break down egos and then build confidence.

New cadets’ days often begin with a 5:20 a.m. muster, followed by rigorous physical training, memorization of rules, cleaning of barracks, and full academic course loads. And by tradition, they get a very hard time from senior cadets for any infractions, real or imagined.

Some accommodations are made for women. As in the military, they are held to somewhat lower standards on physical fitness tests. Female knobs are not made to shave their heads as the men are, though they must keep their hair very short. Women and men live and train in the same barracks, but not in the same rooms.

Ms. Hill, the freshman, said that compared with male cadets, she and her fellow women “have to try twice as hard as they do, because just biologically, they can be stronger.”

But while dressings-down are common, Ms. Hill and others said, sexist comments are not. “All of our classmates have been very helpful,” said Michelle Banzon, another freshman. “They’re like brothers, actually.”

The gradual acceptance of women at the Citadel is part of a broader narrative of evolution at one of the country’s most proudly hidebound institutions.

This year, uniformed cadets marched for the first time in the Charleston Pride parade, and plaques around campus designate “safe zones” for L.G.B.T. students. Mr. Paluso, who returned to the college as an administrator four years ago, has sought to identify and stamp out its decades-old and notoriously sadistic culture of hazing. The hazing has included students forced to work out under hot showers until they passed out and, according a 1992 Sports Illustrated report, an upperclassman holding a pistol to the heads of knobs while they tried to memorize the college guidebook.

Mr. Paluso led an investigation in 2015 that identified and disciplined 19 students involved in hazing incidents.

The first days of college for knobs, long referred to as Hell Week, is called Challenge Week these days. But college officials say the experience has not gotten any easier.

“I don’t want there to be any idea that we’ve become a kind and gentle and soothing place,” said John L. Dorrian, a retired Air Force colonel and the college’s vice president for communications and marketing.

Ms. Faulkner’s swift withdrawal — she was felled by an intense heat wave on her first day of military training — remains a sensitive topic. In March, she was invited back to the college, where she told a crowd that she considered herself an alumna. That drew a rebuke from the first woman to graduate, Nancy Mace, now a Republican state representative for the Charleston area.

“There is no edification or achievement in her failure,” Ms. Mace wrote on Facebook.

Some have said that Ms. Faulkner did not come physically prepared, but the same cannot be said of Ms. Zorn, who took part in Junior R.O.T.C. in high school and has earned a reputation for posting impressive physical training scores. She can do more than 70 push-ups in two minutes, and has black belts in three karate disciplines.

She made an impression on college officials during her first week on campus, following the death of the beloved aunt who had cared for her after her mother died. She was given a brief leave to attend the funeral, and returned after 30 hours. Charles Graham, a retired Marine lieutenant colonel who works at the college, said that many students would not have been able to do so after such a shock.

“The corps became her family real quick,” Mr. Graham said. “She was in physically great shape, and she was mentally tough.”

The top cadet each year is selected by a small board headed by Mr. Paluso and made up of staff members and students. After interviewing a number of candidates, Mr. Paluso said, he was impressed that Ms. Zorn seemed out to do a job, not make a political point.

In an interview at the library, Ms. Zorn spoke with care and precision. She said her mother, an Air Force veteran who died when she was in high school, instilled in her a love of country. She won a four-year Army scholarship, and will serve for at least five years after graduation; about a third of Citadel graduates go on to join the military.

David Days, 20, a junior who will serve next year as Ms. Zorn’s second-in-command, said that he and most other cadets were excited for her, though a small group did not want to be led by a woman.

Those cadets have apparently decided not to broach the topic with the triple black belt. If sexism remains at the Citadel, Ms. Zorn said, she has not experienced it personally.

“You’re treated as an equal,” she said, “and you are expected to perform as an equal.”