‘Space Force? Is that Real?’ Guardians Still Struggling with an Unconvinced Public 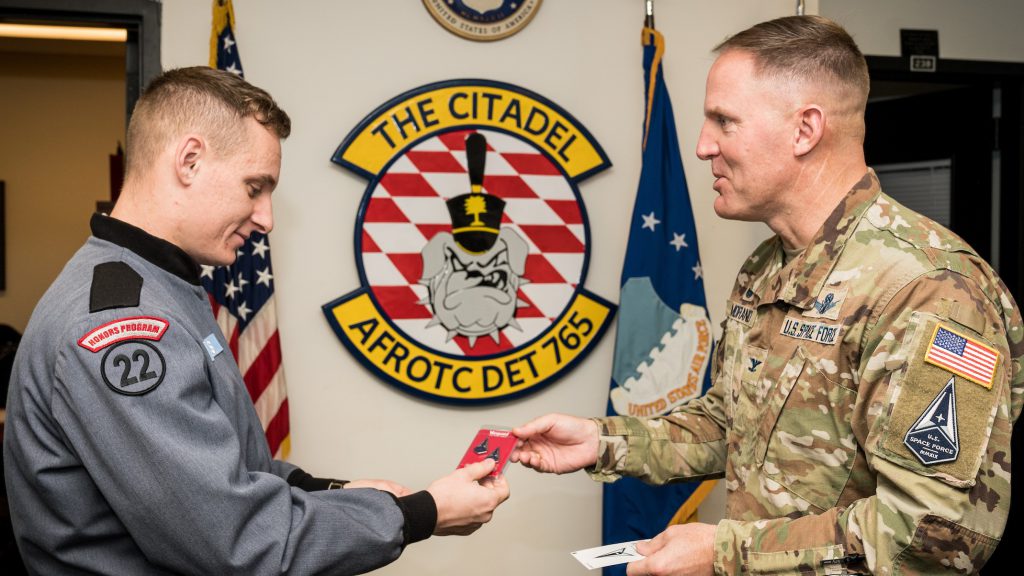 Photo: Cadet Conor William Deans, the first Citadel set to commission into the U.S. Space Force, is congratulated by Col. Matthew Morand, USSF, in November 2021. Both Deans and Morand are quoted in the article below.

As seen on Military.com, by Thomas Novelly

A Space Force captain traveling with their spouse stood stunned at the Spirit Airlines ticket counter this past October hoping to take advantage of the company’s waived baggage fees for active-duty service members.

But there was a problem: The Spirit employee didn’t believe the Space Force exists.

The officer showed a military-issued ID card, pulled up the official website on their phone and explained the recent history of the Space Force. The desk attendant believed the service member was no longer active in the Air Force, couldn’t comprehend the existence of the new branch and didn’t want to issue the discount.

“In the moment, I was flabbergasted,” said the officer, who spoke to Military.com on condition of anonymity for fear of reprisal by Space Force superiors. “We tried to take it on methodically and convince him that the Space Force was real.”

It wasn’t until a Spirit supervisor got involved that the Guardian finally received the discount and the couple went on their way without paying the baggage fees. A few days later, the Space Force officer received an emailed apology from the airline, which was reviewed by Military.com.

The incident illustrated what many Guardians have found all too familiar: a public that doesn’t understand America’s newest military branch or believes it’s just a tepidly reviewed Netflix series.

It’s been two years since former President Donald Trump signed a defense policy bill and created the United States Space Force, a separate service branch that is under the Department of the Air Force. But Guardians have taken to social media and told Military.com about how civilians seem befuddled by the concept of the new branch.

And while the Space Force’s mission — to protect and defend the massive U.S. satellite fleet — is crucial in everything from the country’s reliance on GPS to detecting abnormalities in the Earth’s orbit, many in the general public haven’t grasped it.

Conor William Deans, a Space Force ROTC cadet at The Citadel in Charleston, South Carolina, is the first student from the historic military college to accept a commission for the branch.

One day, he was sitting at a burger restaurant with his fellow cadets when a patron stopped by the table and asked them which branch of the military they planned on joining.

Deans proudly told the man he was joining the Space Force.

“‘Space Force? Is that real?'” Deans recalled the man asking. “I tried to explain to him what it was, but he seemed even more confused.”

Deans said he was encouraged to join the Space Force in 2019 when Gen. John Raymond, then with the Air Force, came to campus to talk about his military career. When Raymond became the first chief of space operations, The Citadel cadet said he wanted to be a part of history.

But he said the public has been slow to catch on to the role of the new branch.

“In a lot of ways, it’s still lumped in with the Air Force,” Deans said. “It’s still new and hasn’t expanded its own culture yet, but I think that’ll grow and change.”

Some recent comments from senior military leaders have muddled the relationship between the Air Force and the Space Force.

Earlier this month, Air Force Secretary Frank Kendall spoke about the relationship between the branches at a Center for a New American Security virtual event Jan. 19.

“We want the Space Force to be an independent, separate service,” Kendall said. “But we also want it to stay as tightly coupled to the Air Force and the Department of the Air Force as it’s necessary for it to be a success.”

Some Guardians complained about Kendall’s comment on social media and said they want the Space Force’s top leadership to help shape a distinct identity for the service to the general public.

Raymond, speaking at a Center for Strategic and International Studies event also on Jan.19, said the Space Force can’t become just a carbon copy of the Air Force.

“If we go into this and just iterate our way down the path and become nothing more than an Air Force, changes a little bit here and there, we’ve missed a huge opportunity,” Raymond said.

Todd Harrison, director of the Aerospace Security Project at the nonprofit Center for Strategic and International Studies, said many Americans don’t know what the military does, let alone the semantics of the service branches.

But he added that there needs to be a concerted effort from Space Force leadership to make their mission explicitly clear to the public.

“Space Force needs to make an internal culture that is distinctive from the Air Force,” Harrison said. “They need to separate themselves from NASA and from the Netflix parody and communicate, ‘This is what we do.'”

Space Force Col. Matthew Morand, an officer who runs the branch’s ROTC program at The Citadel, said many of his friends and family were confused, too, when he transferred from the Air Force.

“I’ve had people ask me while I’m standing there in my military uniform, ‘Is Space Force a real thing?'” Morand said. “A lot of folks don’t understand what we do, and there aren’t many of us. We’re tiny.”

The Space Force currently has around 6,800 Guardians and 6,700 civilian employees. By comparison, the Air Force has around 650,000 personnel.

The service began transferring members from the Army, Navy and Marine Corps, after focusing the first year on transfers from the Air Force.

“We’re going to be tied to the hip with the Air Force for some time,” Morand said. “But culture takes time, and we’re working on that culture.”

Chief Master Sgt. Roger Towberman, the Space Force’s highest noncommissioned officer, told Military.com in an interview that, while many in the public sphere may not know what the branch does, he believes the mission is important and hopes that, with time, it will change.

“I would say the awareness is growing all the time, and that makes me really happy,” Towberman said. “What I see in the Space Force, specifically, is this slow evolution of this really special thing that we’re trying to do.”