‘Pride of our campus’: At The Citadel, cadets and bulldogs living together 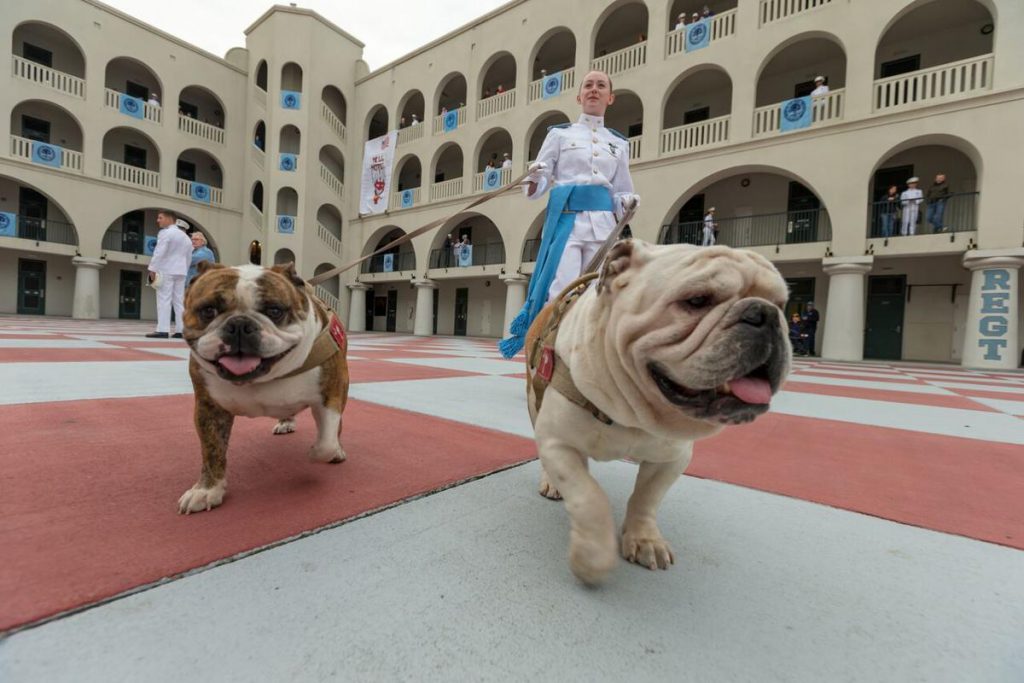 As seen in The Post and Courier, by Jeff Hartsell and Grace Beahm

On the rare mornings that Citadel cadet Jennifer Pozzani slept through her alarm, her roommate in Law Barracks was quick to action.

“If you hit snooze and go back to bed, she’ll start poking you with your paw,” Pozzani says. “And when you get up to get ready, she takes your spot on the pillow. She’s definitely a hoot.”

For the last few weeks of the spring semester, Pozzani’s roommate was Boo, one of the military school’s live mascot bulldogs. Boo and Pozzani were living together as part of a new Citadel program that will enable Boo and her fellow mascot, General, to live on the military school’s campus with cadets.

Through the “mascot handler program,” cadets will be largely responsible for the care and feeding of General and Boo, enabling the 5-year-old bulldogs to live in the barracks and be a part of everyday life and special events on campus.

“It’s a really big responsibility,” said Pozzani, a rising junior from Haberstraw, N.Y., who is head of the volunteer program. “A lot of people think it’s just about walking the dogs. But it’s a lot of added responsibility on top of the other things you have to do as cadets.

“It’s a lot of hard work, but everybody is dedicated to it.”

It’s a job that was once handled by assistant athletic director Mike Groshon, who died in 2016. Groshon cared for the bulldogs at his on-campus house and drove them to football games all over the Southeast, where General and Boo were popular attractions.

After Groshon’s death, the bulldogs lived with veterinarian Dr. John Bradford, a Citadel graduate and former Bulldogs’ football player who volunteered to live on campus.

“I was sort of kidding, but I said, ‘Find me a house on campus and I’ll come over and stay,'” said Bradford, who is the bulldogs’ vet. For a couple of months, they had been in two different households, and they were having some trouble.”

Seeking a more permanent solution for General and Boo and future mascots, Citadel officials studied the live-mascot program at Texas A&M. There, the school’s military cadets take care of Reveille IX, a purebred “Rough Collie” that serves as the Aggies’ live mascot.

Pozzani visited Texas A&M to learn the tricks of dog care in the barracks.

“I went to a student conference there, but my off-time mission was to go hang out with the mascot handlers there,” she said. “They gave me a lot of insight into day-to-day things, things you might not think of until you’ve actually done it. When I came back from there, I felt like I was ready to rock and roll and get it going here.”

According to Bradford, the plan was approved by former Citadel president Lt. Gen. John Rosa and commandant of cadets Captain Geno Paluso.

“What we are striving for is a way for the school to run the program,” Bradford said. “I think the plan is great and will work long term.”

During their time together, Boo would often accompany Pozzani to class, to the mess hall, to physical training.

Bradford said he hopes to get another year or two out of Boo and General as the school’s live mascots before turning over duties to a puppy sired by General, who is a brother of Georgia’s Uga mascot. Boo gave birth to a litter of General’s puppies in 2016.

Next year, Pozzani will move into Padgett-Thomas Barracks as Hotel Company’s first sergeant. Boo will again be one of her roommates and a constant companion.

“They have be supervised every minute,” Pozzani said. “We can’t let anything happen to them. They’re the pride of our campus.”