Parades are back at The Citadel 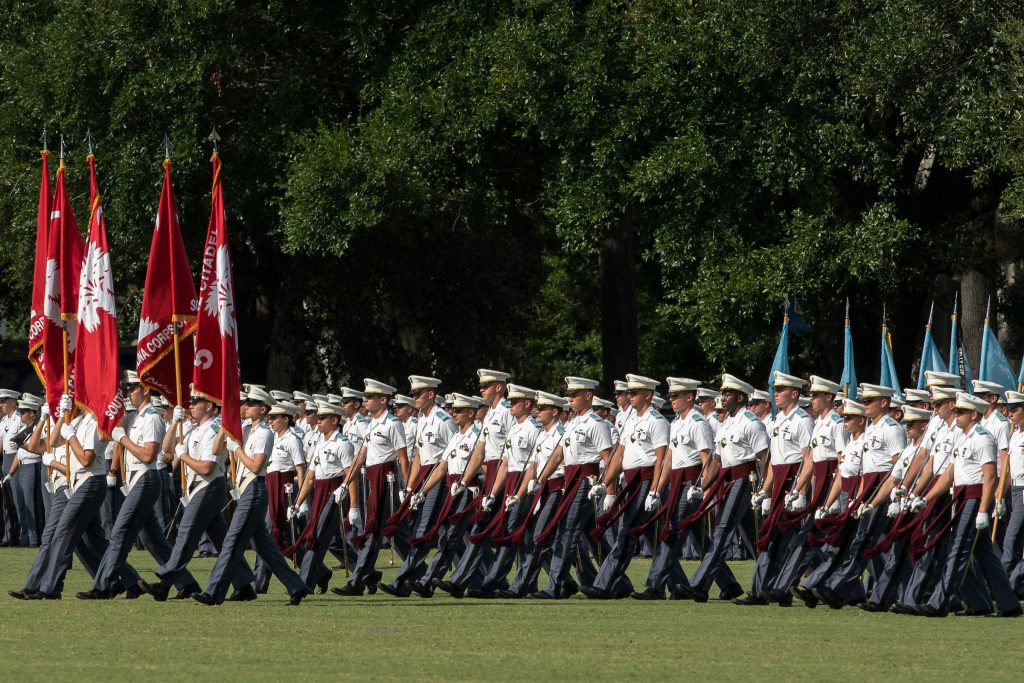 The Citadel military review parade, a patriotic display performed by members of the South Carolina Corps of Cadets, is often described as a “must see” event for those visiting or living in the Lowcountry. And during the 2021-22 academic year, the iconic parades will be back following a hiatus the previous year because of pandemic. (There was an abridged Long Gray Line Parade for The Citadel Class of 2021 in May for seniors and freshmen.)

The parades will be a conditions-based, outdoor activity, as the college continues assessing safety related to the pandemic.

“Everyone loves a parade. Dress parades have been pulling together proud parents, alumni and visitors from around the country to the perimeter of Summerall Field on The Citadel since 1922,” said The Citadel Commandant of Cadets, Col. Tom Gordon, USMC (Retired), ’91. “We look forward to showcasing the discipline, professionalism and Esprit de Corps that defines The Citadel when the South Carolina Corps of Cadets resumes the parade schedule in September.”

The full, traditional parades will resume beginning at 3:45 p.m. on Friday, September 3, marking Gordon’s first parade since joining the Military College of South Carolina as its new commandant July 1.

The purpose of military review parades

The tradition of parading military troops can be traced back to the time of Alexander the Great. U.S. military reviews and parades began at Valley Forge in the late 18th century during the Revolutionary War.

According to the college’s archivist, The Citadel’s parades were written into the regulations in 1845, and specifically mentioned as being held on Friday afternoons in 1849, thus this tradition for the Corps dates back about 180 years.

The Citadel’s parades are conducted to inspect the Corps, render honors, preserve tradition and foster a sense of unity among cadets. Some of the college’s parades also include award presentations and recognitions for alumni and other honored guests.

A ceremonial parade, impeccably performed, can never fail to be a source of inspiration to those who watch it or take part in it. It is the noblest and proudest form of drill. Based on the ‘blunt whetstone’ of drill instruction to recruits, it was for many hundreds of years the foundation of battle discipline in all Armies . . .

View the fall 2021 South Carolina Corps of Cadets parade schedule below, and at this link.