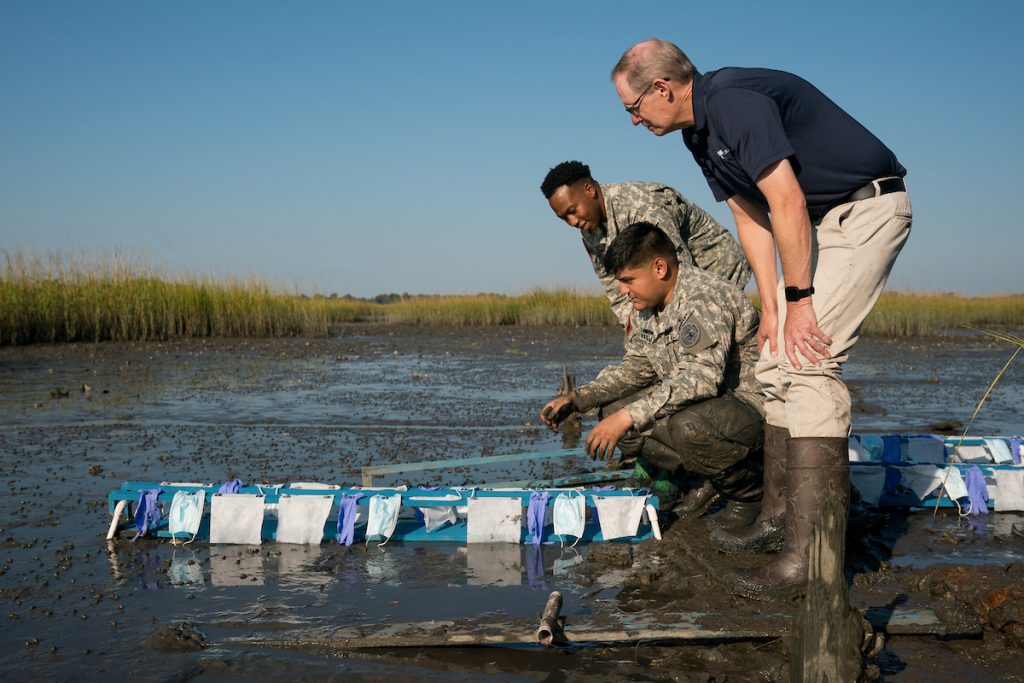 The research is conducted by undergraduate cadets and graduate students, in conjunction with funding Weinstein and the college have received from the S.C. Sea Grant Consortium, National Science Foundation and other sources.

Several continuing projects are underway, with the most recent being a study into personal protective equipment (PPE) waste and its impacts on sea life, and how such micro plastics in the marine food chain may also impact human health.

One of the first comprehensive findings from Weinstein’s research earned global attention with evidence proving that plastic refuse in coastal environments breaks down into micro-particles much more rapidly than previously understood, and that the plastic spheres are commonly ingested by tiny grazing sea creatures, eventually killing them or ending up in the food chain.

The work demonstrates that microscopic plastic particles can be just as hazardous to sea life as whole plastic bags and other larger debris, and that beach and marsh clean up sweeps are needed frequently to remove plastic waste as quickly as possible after it enters the salt marsh environment.

Company accused of polluting ocean with plastic has an ally: SC ports
The State

Degradation of bio-based and biodegradable plastics in a salt marsh habitat: Another potential source of microplastics in coastal waters
Marine Pollution Bulletin

Would you believe that microplastic particles from tires are making their way into our oceans?
@Pattrn (The Weather Channel)

Following up: Thoughts from Dr. John Weinstein after plastics pollution discussions with French leaders and scientists
The Citadel Today

Tires, the plastic polluter you never thought about
National Geographic

Traces of plastic found in Columbia’s drinking water and rivers: researchers not surprised
The State

Diseases form the sea being studied by 3 South Carolina colleges.
The Post and Courier

Tires: An Emerging Threat to Our Waterways, Our Seafood, and Ourselves?
National Resources Defense Council

Awash in wastes; Study says tons of plastic in Charleston Harbor
The Post and Courier

Plastic bag ban on Isle of Palms has Council support, officials say
The Post and Courier

Trash in the water ends up in the drink; The Citadel studies how much
The Post and Courier

The problems with plastics in S.C. waters
The Times and Democrat, from The Post and Courier.

Study says tons of plastic in Charleston Harbor. The Post and Courier and 30+ other news outlets nationwide