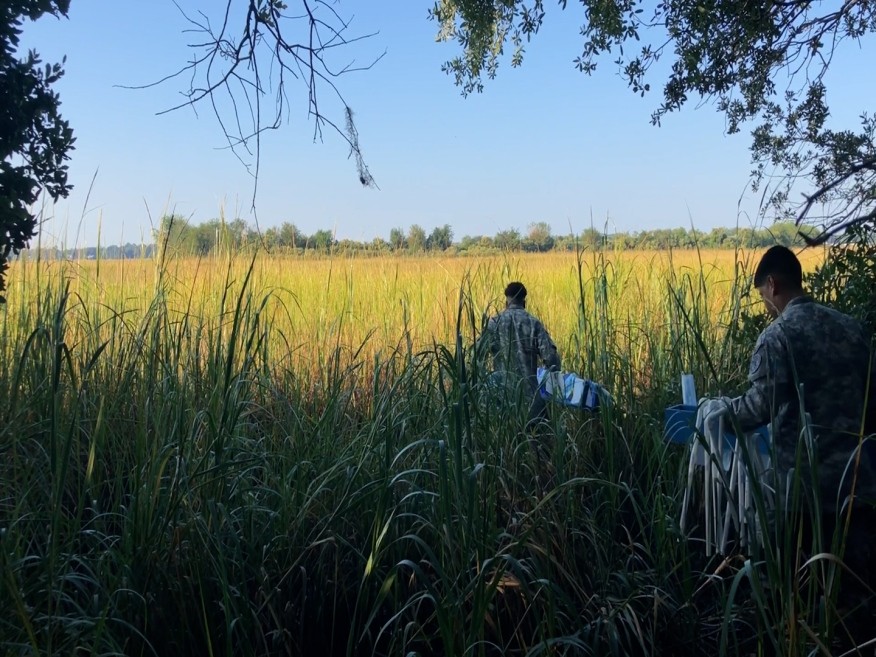 As seen on WCBD-TV, by Forrest Tucker

Armed with boots to trench through muddy banks near the Citadel’s campus, senior cadets Douglas Karam and Jerry Higgins installed a project that the pair have been working on for much of the semester.

“The planning and the process of putting it together actually took about six to seven weeks,” said Karam.

The goal of their experiment is to see how face masks, rubber gloves and hand wipes decompose in a salt marsh environment over the next eight months. The personal protective equipment, or PPE, is screwed down on boards that will become submerged during high tides.

“It feels like you can have an impact on something you’re going through right now,” said Karam.

The COVID-19 pandemic created a large need for items like masks and wipes and not all of them have been disposed of properly.

According to research from Ocean Asia, an estimated 1.5 billion facemasks may have entered the ocean as plastic litter in 2020.

“There’s a myth that plastic items take decades to centuries to degrade. What we’re finding in the salt marsh environment is that it’s happening a lot quicker,” said Citadel Professor of Biology Dr. John Weinstein.

With the Lowcountry’s environment mostly made up of saltwater marshes, Dr. Weinstein and the cadets think that the PPE will start to degrade into thousands of microplastics in a much shorter amount of time.

“We believe that it will degrade in four weeks. But over time we are going to check it out at four weeks, eight weeks, sixteen weeks, and thirty-two weeks,” said Higgins. “So we will see how it degrades over time, the rate of how it degrades, and how much each product degrades.”

The research will help them gauge the impact PPE pollution has on aquatic life, including seafood caught to be served in restaurants, and humans.

“As far as their life processes and what they ingest (the aquatic life) are surrounded in water. Not only does it affect the aquatic animals, but also the people who are living in this environment,” said Higgins.