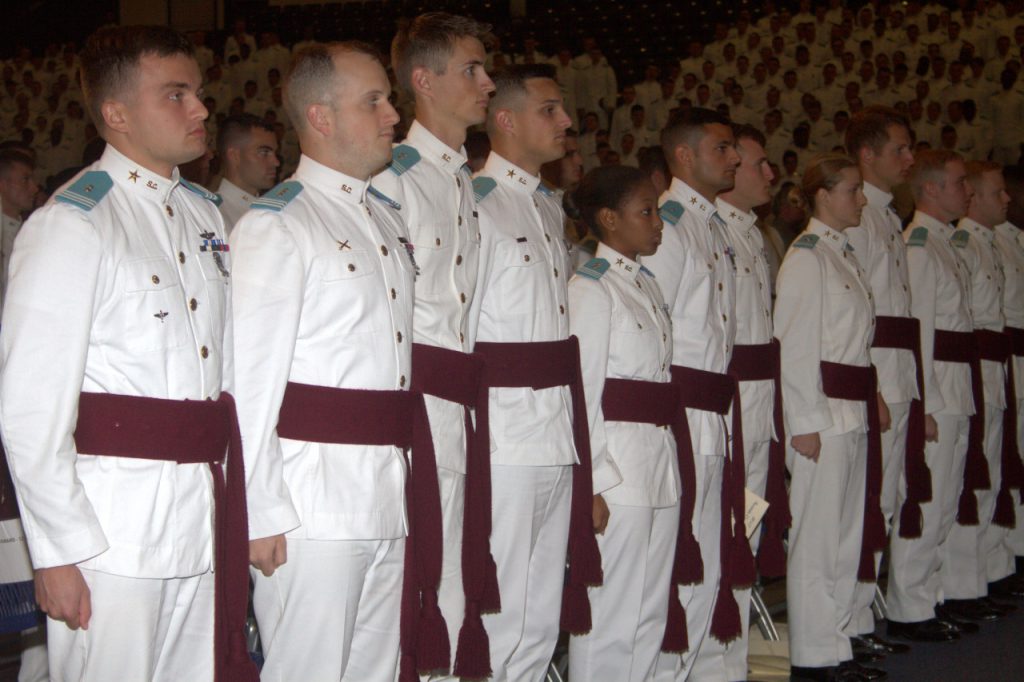 Commencement season at The Citadel is a time to celebrate student achievements in academics, leadership and service. At the Awards Convocation on May 4, more than 50 awards were presented to cadets in recognition of their outstanding accomplishments. Award presenters included Citadel President Lt. Gen. John W. Rosa, Provost and Dean of the College Brig. Gen. Connie Book, Ph.D., and Capt. Geno Paluso, commandant of cadets.

Cadets who made the college’s Who’s Who list this year were also recognized at the ceremony.

Here are this year’s award recipients:

The Air Force ROTC Award for Academic Excellence recognizes a commissioning senior who achieved the highest cumulative grade point average in all his or her academic coursework at The Citadel.

The American Legion College Award is presented to a first-class (senior) cadet who has demonstrated the qualities of military leadership, discipline and citizenship. Key attributes of those chosen are service to others, dedication to values and honor to self and the country.

This award is given to a senior cadet who best exemplifies the finest traditions of The Citadel and best represents the college’s mission.

The Athletic Officer of the Year Award is presented to the athletic officer who, in the opinion of fellow athletic officers, demonstrates outstanding leadership in the administration of unit athletics.

Intramural Athletes of the Year

Each year the battalion and company athletic officers nominate and select cadets who have shown outstanding performance in intramural competition demonstrating athleticism, sportsmanship and competitive spirit.

The Board of Visitors Trophy is awarded annually to the cadet company that excels in physical effectiveness, one of the Four Pillars of the college.

The award is presented in honor of Harry G. Hitopoulos, Class of 1952, and Citadel boxing coach from 1982 to 2006, to the club sport captain who has provided exemplary leadership on and off the playing field.

The Brigadier Foundation President’s Award is voted on annually by members of the graduating class. It recognizes a senior athlete who has contributed the most to The Citadel’s athletic program and the Corps of Cadets.

The award is presented annually to a first-class (senior) cadet who has contributed to the success of cadet life and best exhibits the highest degree of customs and courtesies of a cadet, citizen and soldier.

The Mark W. Clark Honor Committee Award for Exemplary Service recognizes a member of The Honor Committee judged to have made the greatest contribution to the Honor System throughout the school year.

This award is presented to the cadet who achieves the highest overall standing at the Army ROTC advanced camp. Members of The Citadel’s Army ROTC instructor group established the award in 1977 to honor Col. Walter Ballard Clark’s service in the military and at The Citadel. Clark, Citadel Class of 1951, was a professor of military science and commandant of cadets from 1974 to 1977.

This award is presented annually to the graduating first-class (senior) cadet considered the most outstanding in the performance of cadet and military activities who will be commissioned into the armed forces.

This award is presented annually by the Society of the Sons of the American Revolution to the most outstanding cadet being commissioned in the U.S. Army. The sword is awarded in recognition of the superior academic and leadership skills which the recipient has demonstrated during four years as a cadet.

The award is presented annually in memory of Army Lt. Todd L. Dorney, a 1980 Citadel graduate. The sword goes to a senior under Army ROTC contract who ranks in the top 10 percent of his or her class.

The Captain Ryan Hall Leadership Sword is presented annually to the rising senior Air Force contract cadet who has excelled in academics and leadership. The recipient exemplifies the values and attributes of Hall: integrity, loyalty, strength of character, honor, dedication, leadership and service before self. Hall, Citadel Class of 2004, was killed Feb. 18, 2012 while in support of Operation Enduring Freedom. The sword will be carried throughout the cadet’s senior year, until it is again passed on to another deserving Air Force cadet.

The award is given annually by the South Carolina Division of the United Daughters of the Confederacy to the first-class (senior) cadet who demonstrates outstanding leadership and made the greatest contribution to The Citadel while a cadet.

The award is presented annually at The Citadel to the graduating senior cadet who was selected by classmates as showing the most tact, consideration and courtesy to fellow cadets.

The award is given to the senior who throughout his or her cadet career made the greatest contribution as a Christian cadet on the athletic field and to the spiritual life of the Corps of Cadets. It is named for Marine Corps Lt. Col. Thomas E. Hemingway, Class of 1960.

The Leigh Hochreich Memorial Fund Award is presented annually to a senior who best displays strong character, patriotism, love of fellow man, loyalty and devotion to The Citadel.

The award is presented annually to a senior cadet who will commission in the military and demonstrates outstanding leadership in the day-to-day running of the Corps of Cadets. The cadet must exhibit unwavering love for The Citadel along with the leadership traits of honor, self-discipline, courage, patriotism, high moral standards and service to fellow cadets. The award is named after a former commandant of cadets and 1963 Citadel graduate.

The Marine Officer’s Mameluke Sword is presented in memory of 1st Lt. Dan Malcom Jr., Class of 2001, who was killed in 2004 in Iraq. It recognizes a cadet for leadership and dedication while a member of The Citadel Naval ROTC.

This award is presented annually to a first-class cadet being commissioned in the Army. The recipient must be the top graduating senior in the cadet battalion, must have completed the Leadership Development and Assessment Course and have demonstrated the leadership and scholastic qualities that epitomize the career of Gen. George C. Marshall.

The Cadet Medal of Merit Award

The adjutant general of South Carolina presents this award to an outstanding first-class (senior) cadet who exemplifies the traits of leadership, scholastic achievement, conduct and participation in cadet and college activities.

This award is presented annually at The Citadel to a senior cadet scheduled for commissioning in the military who has excelled in the ROTC program, leadership and the study of military history.

The Robert G. Miller Memorial Sword is given to a graduating Navy midshipman or officer candidate who has excelled in a Navy Battalion leadership position, devoted his or her life to public service and is in the top 25 percent of his or her graduating class.

The Charleston Council of the Navy League presents this award annually to the most outstanding cadet being commissioned in the U.S. Navy. The sword is awarded in recognition of superior academic and leadership skills demonstrated during four years as a Citadel cadet.

The Charleston Council of the Navy League presents the award annually to the most outstanding cadet being commissioned in the U.S. Marine Corps. The sword recognizes superior academic and leadership skills demonstrated during four years at The Citadel.

This award is given to the cadet who has best shown, through his or her superior historical scholarship, an exceptional understanding of and respect for the sacrifices of our founding forefathers and revolutionary patriots.

This award is presented annually to a member of the Honor Committee in recognition of invaluable service to the Corps of Cadets by upholding and promoting the high ideals of The Citadel Honor System.

This award is presented annually by the Daughters of the American Colonists to the graduating cadet who has contributed to the idea of teamwork, morale, and service to others at The Citadel and in the community.

The Henry Dale Smith Public Speaking Award is named in honor of Smith, a 1947 graduate of The Citadel and chairman emeritus of H.D. Smith & Co., one of the largest drug wholesale companies in the country. The award goes to the winner of the annual cadet public speaking competition sponsored by The Citadel Oral Communications Lab.

The award is presented to a contracted freshman or sophomore cadet in one of the ROTC departments who displays scholastic excellence, military proficiency, leadership qualities, and dedication to mission.

The Star of the West

This award has been presented since 1886 to the best drilled cadet in the Corps of Cadets. Two cadets from each battalion compete prior to the winner being named.

The Widder Award is presented annually in memory of Capt. David Widder, a 1959 Citadel graduate who was killed in Vietnam while serving in the Army. The award recognizes the distinguished military student in the Army ROTC who has best exhibited the qualities of devotion to duty, exemplary conduct, military and academic excellence and unquestionable character.

The award is presented to a second-class (junior) cadet selected by the senior cadet leadership for exemplifying the qualities of integrity, devotion to duty and service to The Citadel.

The award is presented to the graduating seniors selected by the business administration faculty as the most outstanding majors in the school.

Col. Charles Hirshey, Ph.D., served as head of The Citadel’s Department of Education from 1969 to 1979. He was a pioneer in education in the Lowcountry and a founding member of the current Citadel Graduate College. Each spring the Col. Charles E. Hirshey award recognizes the most outstanding graduate in teacher education.

The award is presented to the member of the graduating class attaining the highest academic grade point ratio in civil engineering.

The award is presented in memory of an outstanding 1948 graduate of The Citadel’s electrical engineering department. It recognizes an exceptional electrical and computer engineering senior cadet on the basis of scholastic attainment, leadership, and participation in extracurricular activities.

This award is presented to an upperclassman in the college’s national security and intelligence program who demonstrates an act of courage; exhibits The Citadel’s core values; embodies the values and ethical character of a principled leader; exemplifies service before self in actions and deeds; and serves as a role model in his or her academic and personal endeavors.

The award is presented to the graduating senior in the school of humanities and social sciences who best represents the commitment to academic excellence, the breadth of intellectual interests, and the dedication to public service exemplified by the life and career of Joseph P. Riley Jr., Citadel Class of 1964; state legislator from 1968 to 1974; mayor of Charleston from 1975 to 2016; and current endowed chair of American government and public policy professor at The Citadel.

The School of Science and Mathematics Outstanding Student Award

The award was created to recognize superior academic achievement by an undergraduate student majoring in one of the school’s disciplines.

The award is presented to the senior cadet in the field of pre-med with the highest academic average.

Falcon Hawkins, Citadel Class of 1958, was a dedicated U.S. district court judge for South Carolina and served as chief judge from 1990 to 1993. This award recognizes the veteran student at The Citadel who, like Hawkins, has demonstrated patience, wisdom, humility, academic achievement, servant leadership, and sound judgment while always setting an example as a person of integrity.

The Mazur Medal is presented to any cadet who distinguishes him or herself by an act of outstanding citizenship that goes far beyond the normal expectations of cadet daily life. The Andrew Mazur Outstanding Citizenship Award was named after Deputy Sheriff Andrew Mazur, Class of 2001, to memorialize his contributions in protecting and assisting the citizens of Greenville County and the state of South Carolina.

The Cadet Medal of Valor

This award is presented to a cadet who distinguishes him or herself by acts of heroism. The act must result in an exceptional and outstanding accomplishment that involved acceptance of danger or extraordinary responsibilities.