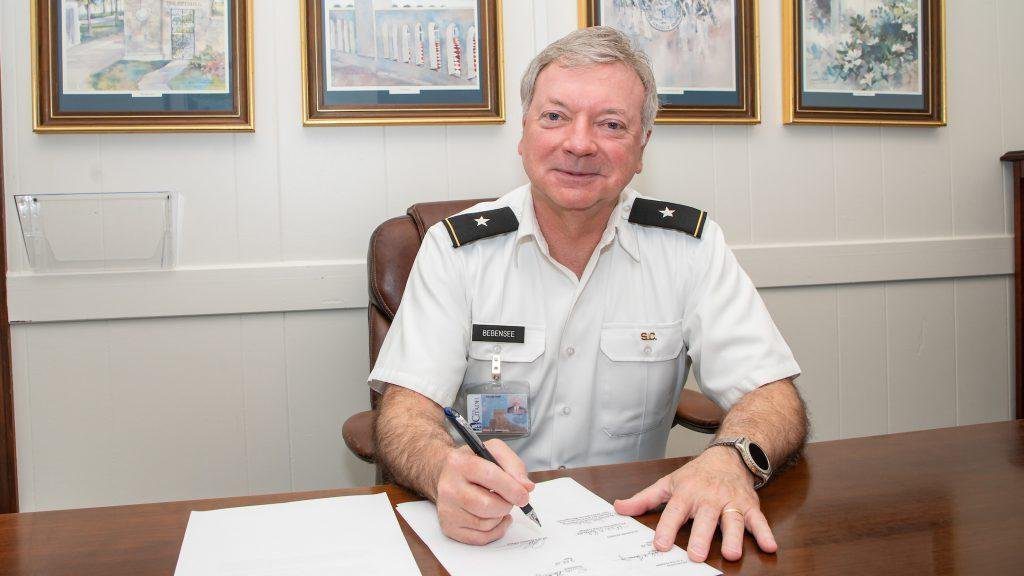 Thousands of men and women passed through Lesesne Gate over the past 42 years. Many of them have gone on to lead armies, governments, corporations, churches and community organizations. And, many of them had their futures fortified by this one man, Mark Bebensee, Ph.D., the man some call the “saint” of The Citadel.

Now, Bebensee’s many admirers are wishing him well as he retires after dedicating his life to lifting those around him toward higher goals through a Citadel education.

“During his decades of service as an educator at The Citadel, Dr. Mark Bebensee helped steer the successful development of thousands of principled leaders,” said Gen. Glenn M. Walters, USMC (Ret.), ’79, president of The Citadel. “A legendary leader and teacher, Dr. Bebensee exemplified the servant leadership he worked to instill in every class of cadets during his time as a professor, department head, assistant dean and as interim provost.”

A leader in many areas of campus

Bebensee joined The Citadel in 1977 as an assistant professor of economics with a B.A. from Millsaps College and an M.A., Ph.D. from Duke University.

He quickly moved through the administrative ranks as assistant to the dean of undergraduate studies as well as department head, and then associate dean of the School of Business Administration for eight years.

Bebensee’s roles continued to grow, to include being named associate provost for academic affairs in 2009, a position he held until being named interim provost in 2018. Despite his many duties, he never stopped teaching in the classroom. Bebensee has won every teaching award The Citadel has, and his instruction extended to a second generation of students who are as generous with their praise of his teaching as their fathers were when they were cadets.

Mark Bebensee is an amazing guy…kind, intelligent, strong, creative and incredibly dedicated. I was at The Citadel when he arrived and blessed to get to know him well. He was the advisor for my son in the early 2000s and guided him to graduation.

He has graciously touched so many lives and made The Citadel a much better place. My wife and I established the Mark A. Bebensee Business School Scholarship after our son graduated. I encourage everyone to donate to the Scholarship and cement his legacy. He deserves the very best retirement has to offer! Daniel Kohl, ’78

Modeling what he taught

The cadets, students, faculty and staff who learned through Bebensee’s work saw a model of servant leadership before their very eyes in the classroom, at events around campus and out in the community.

Most recently, the college community saw that servant-leader in the role of interim provost, celebrating the achievements of the faculty he was leading, helping develop a new general curriculum and long range plan, in addition to being inducted into the Baker School of Business Hall of Fame, the very same school he helped shape over his career.

In addition, many know Bebensee for his talent and generosity exhibited in another role. He was an organist and tireless advocate for The Citadel Cadet Chorale. He’s also known for being the organist at his church, St. Andrews in Mount Pleasant.

In the words of Dr. Bebensee

Q. Why is a Citadel education as relevant to young people today as it was when you began teaching here 42 years ago?

A. For members of the Corps of Cadets, our mission really hasn’t changed very much — we have always been in the business of developing future leaders for all walks of society, military and civilian alike. What has changed is our relatively more recent emphasis on developing principled leaders.

As our society saw evidence of a lack of ethical decision-making through examples like Enron and WorldCom, we realized that we needed to spend more time talking with cadets about the need to make moral, ethical decisions and then giving them some tools they could use to do that.

In my early years, we talked about the barracks being a “learning laboratory for leadership,” but the assumption was that most of that learning was supposed to happen through osmosis! Over time, we have developed and refined a four-year leader development model, we have an added an academic department devoted to Leadership Studies, and we have infused leadership education throughout our four-year curriculum.

For both the Corps and our Citadel Graduate College (CGC) students, I believe our educational offerings have become more relevant over the past 40 years as we added new degree programs such as Nursing, Mechanical Engineering, Construction Engineering, Intelligence and Security Studies, and Cyber Operations, to name a few.

Q. What means the most to you when you consider the contributions you have made to the lives of thousands of cadets and students?

A. I feel amazingly blessed to have found a place to be for 42 years that is in the business of transforming people’s lives — and that’s what happens at The Citadel in both the Corps of Cadets and in the CGC, because education does that. Who gets to work at a place they love for 42 years these days?

In addition, it has been such a privilege as an academician to be associated with an institution whose students tend to stay connected to the school — and therefore to its faculty and staff — long after they have graduated. Hardly a week goes by that I don’t have some type of communication from a former student, and nothing warms the heart of an old teacher more than being remembered fondly by someone years after a class is finished.

In my administrative positions, I have had a chance to influence the hiring of a great many terrific faculty and staff members over the years.

My greatest satisfaction, though, comes from the friendships I still maintain with former students and with people with whom I’ve worked. The thing we all have in common is respect for and admiration of The Citadel. There are great things ahead.