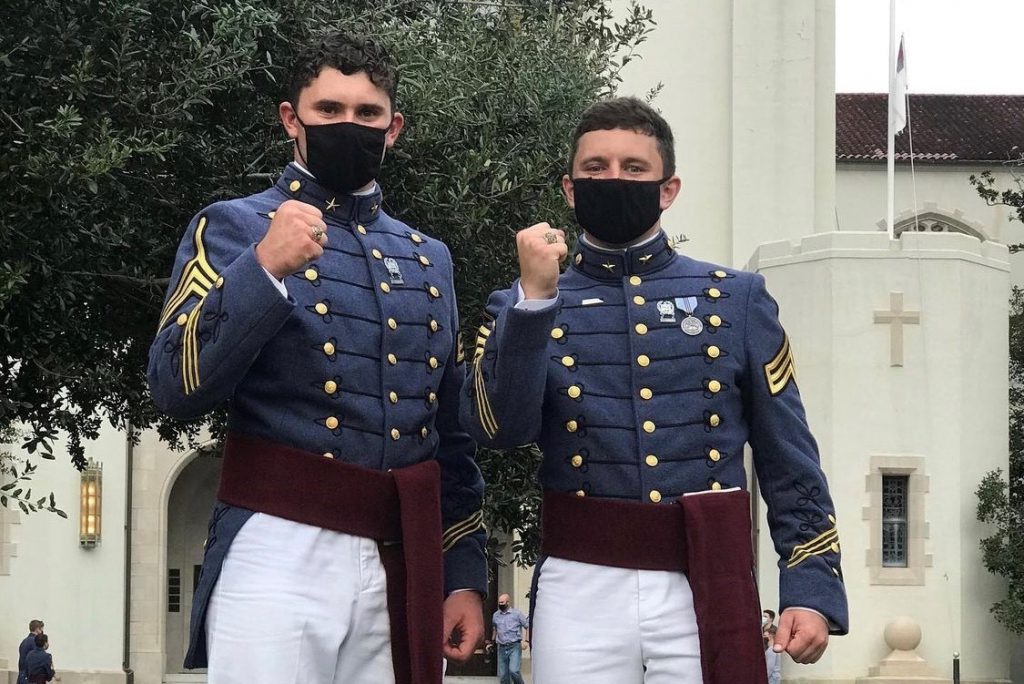 The School of Engineering is celebrating the success of all of its Class of 2021 graduates, but in this class there are some unusual ties between the Mechanical and Civil Engineering programs: two mechanical engineers, two civil engineers, four athletes and two musicians.

The Vettel brothers are Charleston natives and the sons of an engineer father. Eric, a member of the Bulldogs football team, graduates with a Civil and Environmental Engineering degree. Luke, also a cadet-athlete, is a Mechanical Engineering graduate.

According to the head of the Department of Mechanical Engineering, Luke Vettel is one of the top students in the program.

“What makes him unique is his involvement in many facets of cadet life,” said Robert Rabb, Ph.D., P.E., Mechanical Engineering Department head and Assistant Dean for Assessment. “Luke is a member of Phi Kappa Phi, Tau Beta Pi and Omicron Delta Kappa professional societies. He is on The Citadel Track and Field Team where he competed in pole vault and javelin events. Additionally, he participated in a number of service learning projects and The Citadel Track Clinic where he worked with youth group track teams.”

Rabb shared that Luke’s senior design project was a low cost ventilator to assist with the COVID-19 global demand for ventilators and other respiratory assistive devices. “His ventilator is distinctive because it had different settings to change the volume of air based on patient size, from child to adult.”

Luke will work for Agilis Engineering in Greenville, South Carolina, where he will assist in advancing gas turbine engine performance for air transportation.

I selected The Citadel because it offered the chance for me to get a degree in Mechanical Engineering, while continuing my athletic career in track.

I chose Mechanical Engineering because it seemed more exciting and versatile. Our father used to be an engineer, which was one inspiration, but I think that my brother Eric and I each found our own motivations and happened to end up going in similar directions.

Luke Vettell, The Citadel Class of 2021

Eric Vettell will be working with Simmons and White, an Engineering firm in Florida.

Like his brother, Eric is described as a top student within his program: Civil and Environmental Engineering.

“Eric is a committed civil engineer and during his time at The Citadel he was a committed cadet-athlete, playing linebacker/safety on The Citadel football team,” said William J. Davis, Ph.D., P.E., head of the Department of Civil and Environmental Engineering. “Eric served as a leader on his capstone team to design an innovative highway interchange solution for a real-world transportation project at the Charleston International Airport. He was recipient of the 2021 George Walker White Award for outstanding academic achievement and leadership in Civil Engineering.”

I followed the lead of my twin brother in deciding to come to The Citadel. I’ve made friends and learned skills, like time management, that will last a lifetime.

Davis describes Eric as “a naturally perceptive leader who is dedicated to the highest standards of academic excellence as evidenced by his induction into Phi Kappa Phi, Tau Beta Pi, Chi Alpha Sigma and Omicron Delta Kappa.”

Yes, there is another set of Engineering major-twins in The Citadel Class of 2021, John and Jeffrey Kidner, from Dover, Delaware. As identical twins, they may be a bit harder to tell apart, but are also described as standouts in their programs.

Both brothers were on The Citadel Lacrosse team and both are accomplished musicians who performed together as children. In the video below, Jeff can be seen playing the banjo, and John is performing on guitar.

The Army Corps of Engineers will be a shared path for the brothers, as both depart The Citadel as commissioned officers after graduation.

“John Kidner is a student who has effectively balanced success in the Civil Engineering curriculum with a host of cadet leadership positions in the Corps including 1st Sergeant Clerk, Cadre Squad Leader and Cadre Platoon Leader in November Company,” said Davis. “John especially excelled in geotechnical engineering courses. For example, on his capstone design team he was charged with creating an innovative highway interchange solution for a real-world transportation project at the Charleston International Airport.”

The sentiments are similar from Jeff’s department head.

“Jeff has done an outstanding job maintaining a high level of academic success, while balancing his cadet leadership positions and club commitments,” Rabb said. “Outside of the classroom, Jeff served in numerous leadership positions including 1st Sergeant, Supply Sergeant and Cadre Platoon Leader. He was also a member of the Baja Society of Automotive Engineers team where he helped design and build what will be the most competitive off-road vehicle the institution has produced since the team’s inception.”

Examples of other ’21 Engineering graduate success

Cade Bennett and Luke Solomon – Mechanical Engineering
Bennett and Solomon will be joining Hytrol in Jonesboro, Arkansas. Hytrol develops and manufactures conveyor systems for large distribution facilities including Amazon. Hytrol began recruiting from The Citadel last year and recently flew a handful of students to their facility to interview for fulltime and intern positions.

Jordan Cavender – Mechanical Engineering
After interning at the John Hopkins Applied Physics Lab (APL) in Laurel, Maryland for three summers, Cavender will be a fulltime member of their technical staff. APL works on government projects and develops cutting edge technology.

R. Thomas Crawford – Civil and Environmental Engineering
Crawford earned a commission to become an officer in the United States Air Force and will attend pilot training after graduating.

My advice for future cadets: Set ambitious goals and give your all to accomplish them. And then once you have, continue to set even more goals. Always stay hungry, never be satisfied.

Lillian Hendricks – Mechanical Engineering
Hendricks will be working for Volvo manufacturing in Charleston. She interned there during the spring 2021 semester, leading to this fulltime position at Volvo’s new facility.

Hunter Hutton – Civil and Environmental Engineering
After graduation, Hutton begins working toward a Masters of Science in Civil Engineering at Virginia Polytechnic Institute and State University. Hutton earned a Fellowship there through a highly competitive process which will provide his tuition and other benefits.

Christian Seidler – Civil and Environmental Engineering
Seidler earned a commission to become an officer in the United States Air Force and will attend the Tactical Air Control party training program in San Antonio.

I met my best friends at this place, through the toughest days and darkest nights I could rely on the person to my left and right to help me just as I would help them.

Christian Seidler, The Citadel Class of 2021