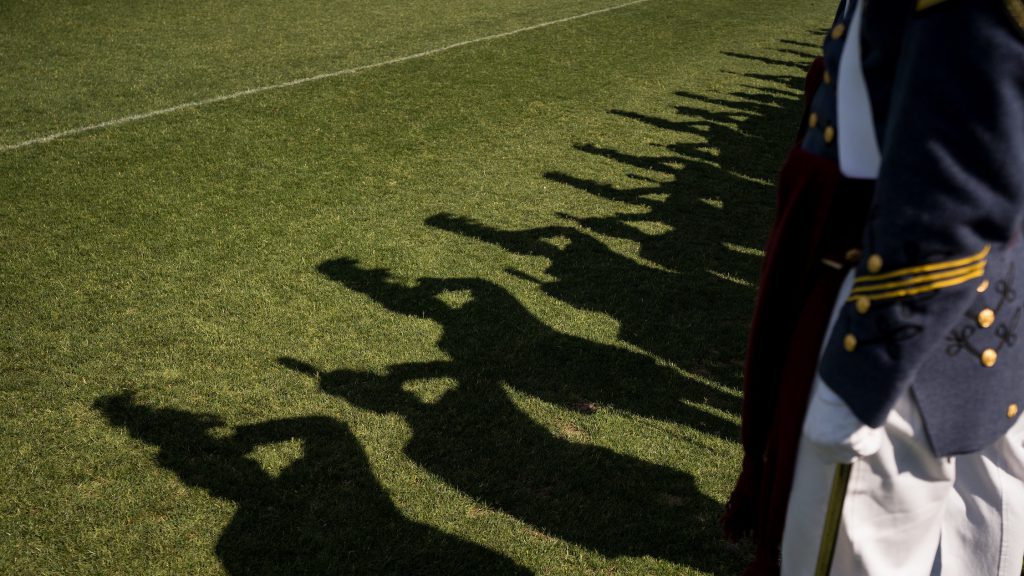 Applications for The Citadel Success Institute

Incoming Citadel freshmen can register now for a program designed to help them succeed in their academics and fitness once they enter The Citadel’s 24/7 military lifestyle at the beginning of their fall semester.

The Citadel Success Institute (CSI) is an optional, 23-day program that gives future cadets an opportunity to earn college credit through core curriculum courses, learn and apply crucial academic skills, improve their fitness levels and receive guidance and mentoring from current Citadel cadets, faculty and staff. The goal is to help acclimate future cadets to the requirements and rigors of the college’s military setting.

There will be two sessions of CSI for future cadets to choose from: the first session runs from June 6 – July 1 and the second session will be July 5 – July 30.

Each session costs $3,500. There are a limited number of partial scholarships available for both sessions of CSI. All students will be considered based upon their FAFSA and a need basis.

Statistics show that freshmen participating in CSI are better prepared to succeed at The Citadel.

Star of the West finals

Wednesday, May 4
9 a.m.
Summerall Field
Free, open to the public

Members of the South Carolina Corps of Cadets will compete to be recognized as this year’s best-drilled cadet at 9 a.m. on Wednesday, May 4.

The Star of the West competition, which began at The Citadel in 1886, is an annual event that recognizes and celebrates the precision required in military maneuvers and leadership positions in general.

Additionally, the winner will be awarded the Star of the West medal, which contains wood from the old ship, during the South Carolina Corps of Cadets awards convocation in on Thursday, May 5.

The Citadel will honor cadets, veterans and active duty military students for their leadership, service and academic excellence at 10 a.m. on Thursday, May 5. The annual awards convocation will be held in McAlister Field House.

More than 50 awards will be presented to cadets in recognition of their outstanding accomplishments in areas such as academic performance, leadership, outstanding performance in intramural competitions and more.

Thursday, May 5
2 p.m.
Summerall Chapel
Free, open to the public

Prior to retiring in 2008, Baldwin was a member of the special staff of the Chief of Staff who advised on all matters pertaining to the religious and moral welfare of the Air Force. Additionally, he was responsible for establishing an effective total chaplain program to meet the religious needs of all members of the Air Force.

A 1969 graduate of the U.S. Air Force Academy, Chaplain Baldwin flew the EC-121, then later, the HH-53 as a rescue helicopter pilot. In January 1977, he earned a Master of Divinity degree from Southern Baptist Theological Seminary in Louisville, Kentucky, and was assigned to Lackland Air Force Base, Texas, as a Protestant chaplain. He later served in Sardinia, Italy, the academy’s cadet chapel, Saudi Arabia, and the Office of the Chief of Chaplains.

Thursday, May 5
3:30 p.m.
Summerall Chapel
Free, open to nursing graduates and their guests

The Citadel’s newest graduating class of from the Swain Department of Nursing will be symbolically welcomed into their new profession during a ceremony on Thursday, May 5.

The nursing graduates will be recognized at the pinning ceremony which will be held at 3:30 p.m. in Summerall Chapel.

Lt. Gen. Dorothy A. Hogg, USAF (Ret.), will address the graduates during the ceremony. Prior to retiring from military service, Hogg was the Surgeon General, Headquarters U.S. Air Force, Pentagon and also served as the first Surgeon General of the U.S. Space Force. In those roles she served as advisor to the Secretary of the Air Force, the Air Force Chief of Staff, the Space Force Chief of Space Operations and the Assistant Secretary of Defense for Health Affairs on matters pertaining to the medical aspects of the air expeditionary force and the health of Airmen and Guardians.

On Thursday, May 5, all graduate college, undergraduate transfer and veteran students are invited to celebrate their graduation and their fellow students’ academic accomplishments.

The awards ceremony will begin at 5:30 p.m. Award recipients will receive their awards and have their photographs taken with Gen. Glenn Walters, USMC (Ret.), ‘79.

It will be followed by a reception for all CGC graduates, which starts at 6:15 p.m., following the ceremony.

Nearly 200 of the U.S. military’s newest officers will be commissioned in a joint ceremony on Friday, May 6.

Citadel cadets who will join the armed services after graduation will take their commissioning oaths during the ceremony. Approximately 30% of the South Carolina Corps of Cadets Class of 2022 will accept commissions into the military.

The commissioning cadets will be officially sworn in as officers during the South Carolina Corps of Cadets commencement ceremony on Saturday, May 4.

More than 600 cadets will take part in the Long Gray Line parade on Friday, May 6. The Long Gray Line refers to the men and women who have graduated from the South Carolina Corps of Cadets and the unique ties that bind those that graduate to others who have come before, and all who will come after.

More than 600 members of the South Carolina Corps of Cadets will receive their diplomas during the Class of 2022 commencement ceremony on Saturday, May 7.

The doors to McAlister Field House will open for guests at 7:30 a.m. For those on campus who do not have a ticket to attend the SCCC ceremony inside McAlister Field House, The Citadel will be broadcasting a livestream of the entire commencement event in Bond Hall, Room 165. Bond Hall can be located on the college’s virtual map, at position number 50.

For the security of all in attendance, only clear bags will be allowed inside the auditorium. Metal detection and scanning devices will be in place at the entrances.

Admiral James George Stavridis, USN (Ret.), 16th Supreme Allied Commander at NATO, 12th Dean of The Fletcher School of Law and Diplomacy at Tufts University, and currently Vice Chairman, Global Affairs of the Carlyle Group, will serve as the speaker for the Corps of Cadets commencement.

For more information on attending or viewing the commencement livestream, click here.

The Citadel Graduate College will celebrate more than 450 undergraduate and graduate students during the Class of 2022 commencement ceremony at 3:30 p.m. on Saturday, May 7.

It will be held in McAlister Field House; doors will open to guests beginning at 2:30 p.m.

For the security of all in attendance, only clear bags will be allowed inside the auditorium. Metal detection and scanning devices will be in place at the entrances.

Claudius “Bud” Watts IV, ’83, Managing Partner of Meeting Street Capital and Chairman of the Board of CommScope, Inc., will address The Citadel Graduate College.

For more information on attending or viewing the commencement livestream, click here.

A professor of economics at The Citadel, Richard Ebeling, Ph.D., will be presented an honorary Doctoral Degree in Social Sciences by Francisco Marroquin University (UFM) in Guatemala City, Guatemala.

UFM is one of the most respected private institutions of higher learning in Latin America, drawing students from many Central and South American countries, as well as having a campus in Madrid, Spain.

Ebeling has lectured multiple times at UFM over the years. Previous recipients of this award at UFM include Nobel laureate economists such as Friedrich A. Hayek, Milton Friedman and James M. Buchanan, as well as European leaders, including former president of the Czech Republic, Vaclav Klaus.

Ebeling will also delivery a public lecture for the university’s faculty and students on Friday, May 6.

The Citadel will host the first annual South Carolina Sea Grant Consortium Research Symposium on May 11 and 12.

The symposium will bring together scientists, students and stakeholders from the Southeast region, with the goal of sharing research impacts, building networks to address emerging issues in costal science and management, and defining action steps to enhance equity and community-driven solutions.

The keynote speaker will be Claudia Benitez-Nelson, Ph.D., from the University of South Carolina.

Registration is now open for The Citadel STEAM Camp, where rising 5th – 8th grade students can spend a week learning about the future of forensics.

Students will have an opportunity to to go hands-on and high-tech to solve crime scene mysteries with art and science. Activities include capturing digital images with drones and 3D scanners, collect biological and physical evidence, and conducting experiments to crack the case, all while gaining real-world knowledge from Citadel faculty and field experts.

The camp costs $250 per student. To register, click here.