Tigers, Gamecocks, Bulldogs and Paladins: How they came to be 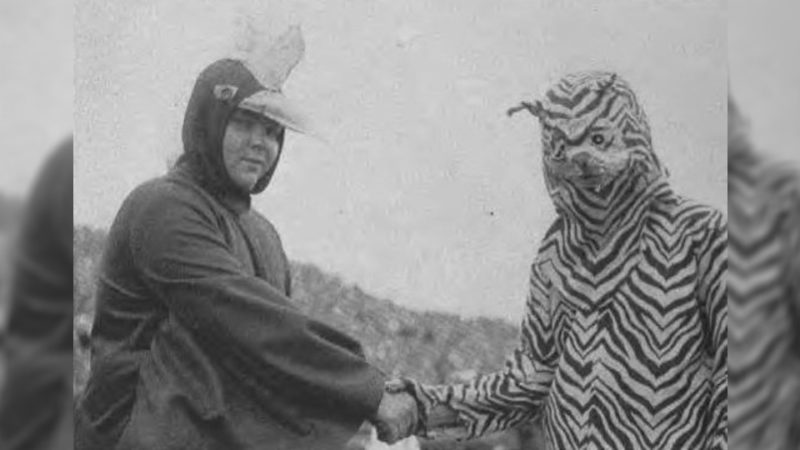 As seen on GreenvilleJournal.com, by Jeannie Putnam

Photo above: UofSC Gamecock and Clemson Tiger in 1957, photo provided by UofSC

Whether a Tiger, Gamecock, Bulldog or Paladin, even the most athletically-apathetic South Carolinian probably knows which mascot belongs with its corresponding school.

What might be harder for many to pin down is how these mascots came to be. As football season approaches and fans don their team colors, the Greenville Journal did a little digging into the histories behind these icons.

One of the earliest established big South Carolina college mascots was the Gamecock.

According to University of South Carolina archivist Elizabeth Cassidy West, the mascot first appeared in 1902.

“The university didn’t have a mascot prior to that year, though the sports teams had called themselves the jaguars one year,” West said. “The adoption of the mascot was related to the 1902 Carolina-Clemson riot. A drawing of a gamecock crowing over a beaten tiger sparked the 1902 Carolina Clemson Riot, after Carolina scored an upset football victory. Clemson students took offense when Carolina students carried the drawing in a parade on Main Street, so they marched on the campus to seize the drawing. Violence was averted and the drawing was burned between the two groups; the event gave birth to the Tiger Burn tradition and cemented the gamecock as the school’s mascot.”

While West was able to officially identify when UofSC picked its mascot, why the college chose the Gamecock is not clear.

Since South Carolina was an agricultural state when the mascot was chosen, the ‘Fighting Gamecock’ may have been selected since it was a well-known animal. However, it may have also had a connection with Thomas Sumter, who was nicknamed “The Gamecock” and fought in the Revolutionary War, she said.

Regardless of the origin, UofSC’s mascot has evolved over the years. The university originally had a variety of homemade Gamecock costumes before the introduction of Big Spur in 1978.

The college eventually went on to add the less intimidating Cocky as a co-mascot in 1980, said West.

Similar to UofSC, The Citadel has kept its bulldog mascot since its debut in 1928.

The school has had 26 different bulldog mascots over the years, including General Mike D. Groshon or G3 for short, who made his debut in 2020 and is still performing his mascot duties.

While UofSC and The Citadel saw an evolution of their original mascots, Furman University’s journey was slightly different.

Furman’s first official mascot was a knight, commonly known as the Paladin, but the college’s football team was known by nicknames such as the Paladins and the Purple Hurricanes, bestowed upon them by the local press and community, said Jeffrey Makala, associate director for special collections and university archivist at Furman.

The school’s baseball and basketball teams were sometimes called the “Hornets,” he said.

According to Makala, the Paladin was officially chosen following a student body vote in 1961, which was when the university combined the Greenville Women’s College and its men’s college into one school and moved onto its current campus.

With the mascot established, the Paladin made its debut as a shiny knight on horseback who would ride the sidelines during the football games.

In addition, Furman added a Paladin with a big foam head named Victor in the 1980s, said Makala.

The evolution of the Tiger

Similar to UofSC, the origin of the Clemson Tiger is not 100% certain.

“All I have ever heard about that is that when we started our football program, we had a run of people who came from Auburn and Auburn is the Tigers as well,” he said.

In addition, there is uncertainty about when the Tiger first made his appearance. John Seketa, who wrote, “Clemson Through the Eyes of the Tiger,” points to the early 1950s as the time when the mascot made its first appearance.

To add to the confusion of the year, an article on ClemsonTigers.com said the mascot first appeared in 1954. Former Clemson cheerleader George Bennett said it was earlier.

Along with the Tiger, Clemson also had the Country Gentleman mascot, who carried a cane as he went through several costume changes over the years including a coat with tails, a mountaineer style outfit and three-quarter length velvet coat with a frilly tie. This mascot, which was seen as a plantation owner, stayed until 1972, following a vote to remove racially insensitive items such as the Confederate flag and ending the performance of the song “Dixie” at games, said Clemson Football front desk receptionist and former cheerleader Jim Douglas.

With the Country Gentleman gone, the university eventually added a “Tiger Cub” for younger fans in 1994, said Seketa.