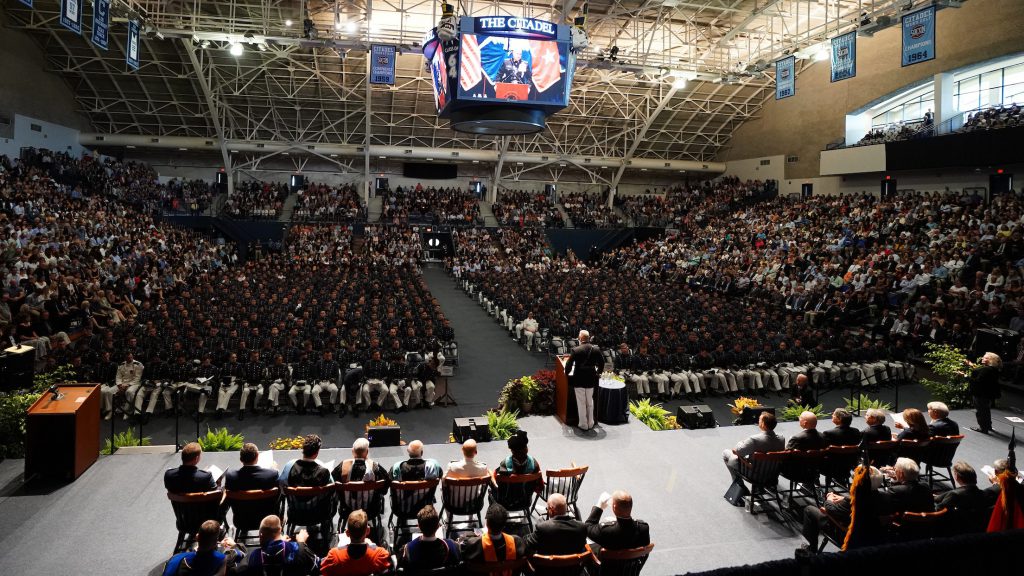 The Citadel honored five of its most outstanding cadets and two distinguished faculty members during the Awards Convocation on Thursday, May 5 and the South Carolina Corps of Cadets Commencement ceremony on Saturday, May 7.

The awards, which are given out annually, recognize the cadets with the highest grade-point averages, the most courteous member of the graduating class, a cadet and a faculty member who achieved academic excellence, and a faculty member for his or her love of teaching.

The David Shingler Spell First and Second Honor Graduates are the cadets whose grade-point averages are the highest in each graduating class, based on the total college record of that class. Recipients of the awards receive a plaque and a stipend for educational expenses at the graduate level.

Jones is a Mechanical Engineering major from Anderson, South Carolina. He was part of The Citadel Honors Program, co-captain of the Pistol Team and selected as an All-American this year. Jones has accepted a position as a mechanical engineer with the Naval Air Systems Command, Fleet Readiness Center East, in Cherry Point, North Carolina, which plays an important role in our national defense and readiness.

Ruiz is a double major in Political Science as well as Intelligence and Security Studies from Knoxville, Tennessee. She was presented the coveted Leidos Award as the best student in Intelligence and Security Studies, and was also a National Science Foundation CyberCorps Scholarship for Service recipient. In addition, Ruiz has held several important internships with NSA and the State Department in addition to participating in humanitarian relief work in Puerto Rico.

The Second Honor Graduate for the Class of 2022 is Cadet Joseph Roland, a Mechanical Engineering major from Gilbert, South Carolina who accepted a commission into the U.S. Navy. Roland was an active member of The Citadel Honors Program and served as the Third Battalion Academic Officer in his senior year. Upon graduation, Roland will begin his path as a Submarine Warfare Officer at the Nuclear Power School in Charleston, South Carolina.

The Class of 2022 voted to award the John O. Willson Ring to Cadet Cody Green. Green is an Accounting major from Knoxville, Tennessee.

Because of his outstanding leadership abilities, Green was selected to serve as commander of Echo Company. Academically, Green is a distinguished military graduate and will enter the U.S. Marine Corps upon graduation.

During the awards convocation on Thursday, May 5, the Algernon Sydney Sullivan Awards were presented to Cadet Jaret Price and John Peeples, Ph.D. The awards are presented annually through the New York Southern Society to a student and faculty member in recognition of high thought and noble endeavor.

Cadet Jaret Price, an Exercise Science major from Aiken, South Carolina, served as the Sierra Company commander throughout his senior year. He is a member of Omicron Delta Kappa, a national leadership honor society, and serves as president of the Association of the United States Army Citadel Chapter. Price serves the surrounding Charleston community, volunteering off campus with multiple organizations; he has amassed over 250 hours of service through multiple volunteerism efforts, including feeding the homeless through Feed-A-Friend Friday program and the organization of a 110-flight stair climb to commemorate the 20th anniversary of the 9/11 attacks.

After graduating from The Citadel in 1970, John Peeples, Ph.D., has led a career characterized by serving others and making the world a better place by promoting the field of engineering. Peeples served his country in the U.S. Air Force and went on to earn his M.S. and Ph.D. in electrical engineering. He then had an illustrious, 30-year career in the computer industry before coming back to The Citadel to teach the next generation of engineers. For over 20 years, Peeples has inspired students and faculty as a professor and head of the department, instilling in his students a sense of the nobility and importance of engineering.

Grimsley Award for excellence presented to Director of the Honors program

Deirdre Ragan, Ph.D., a professor of Mechanical Engineering and Director of the Honors Program at The Citadel, received the James A. Grimsley Jr. Award for Undergraduate Teaching Excellence.

Ragan delivers excellence through her unwavering passion and commitment to students and her faith in the mission of The Citadel. Cadets and students remark on her level of knowledge regarding the subject matter, as well as her ability to teach and explain those topics. While challenging, her students appreciate her emphasis on reasoning through a problem and understanding the implications of a result.

This award, established 35 years ago, recognizes the outstanding performance by a member of the faculty in service to undergraduate students. The winner is chosen by the senior class from nominations by students and faculty members.