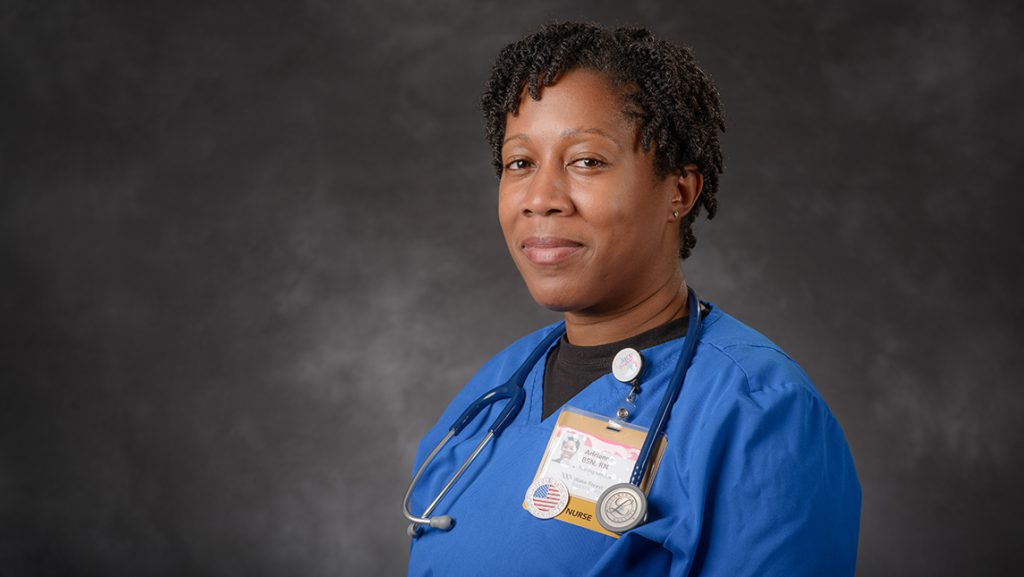 Photo: Adrienne Crosby, a member of The Citadel Class of 2002 — the first class to include African American women (Courtesy: UNCG News)

As seen on the University of North Carolina Greensboro News

“Never let anyone tell you what you can and cannot do.”

Those words that Adrienne Crosby’s father told her as a little girl have helped guide her throughout her life – as a member of the U.S. Army, as a wife, as a mom to twin boys, and as a neonatal intensive care unit nurse.

“The word ‘can’t’ doesn’t exist in my vocabulary. My goal has always been to break barriers, especially for women,” said the 2020 School of Nursing graduate.

Crosby knew she wanted to be a leader and serve in the military since high school. Upon graduating, she heard about The Citadel, a military college in South Carolina that was a predominantly male school from which a Black woman had yet to graduate. Crosby was determined to be the first.

“I wanted to be able to show my family and the world that as an African American woman, I was not going to be held to anyone’s lower standards. I was going to do this for myself and for all women.”

And she did just that. Crosby and six of her peers made history in 2002 as the first class of African American women to graduate from The Citadel.

Over her 13 years of service in the Army, Crosby served across the nation and internationally, but the deployment that was most impactful was her tour in Iraq. There she served as a major and was responsible for training Iraqi Armed Forces on securing their communication and computer networks and assisting Iraqi women and children on receiving medical attention and providing them with necessary supplies.

“Serving in Iraq helped me appreciate the privileges and opportunities I have as an American. Seeing women begging on the streets, children with their stomachs swollen, and houses on the verge of collapsing truly humbled me.”

In 2015, Crosby became pregnant with twin boys who were born prematurely at 31 weeks. Her newborns spent two month in the neonatal intensive care unit (NICU).

“There I was – a leader to soldiers for 13 years – and yet I wasn’t able to take care of my own babies. Seeing the love, compassion, and professionalism those NICU nurses had for my sons was the moment that I knew I wanted to be a nurse.”

After her twins were born, although she aspired to become a one-star general, Crosby left the Army to prioritize her family. Two years later, watching nurses care for her father before he passed was the final push that made her realize it was finally time to fulfill her lifelong dream of pursuing a career that would allow her to take care of people.

While researching nursing programs, UNC Greensboro’s School of Nursing stood out to her because of the Veterans Access Program, which streamlined the admissions and course credits transfer process for her. She began her studies in the fall of 2018.

“Nursing school is one of the hardest things I’ve ever had to do in my life. Being a wife, a mom, and an adult student at the same time was tough, but I had the support of the staff at UNCG, especially Dr. Hoffman, the academic enhancement coordinator for the nursing school.”

Crosby graduated in May, and is now a nurse in the NICU at Wake Forest Baptist Health.

“To me, Veterans Day means honoring all of the men and women who fought for the freedoms of this country before me, giving me the opportunities and freedom that I have today. I served in the military because I wanted to give back to my country and to the veterans before me. Now, I get to help the mothers and babies in the NICU fight for their health, just like the NICU nurses fought for me and my sons.”

Crosby isn’t finished serving others yet. Her ultimate goal is to be a women’s health nurse practitioner, fulfilling her passion of helping and empowering women.

“We as women can accomplish anything when we put our hearts and our minds to it.”