SC women rank high in many areas at The Citadel 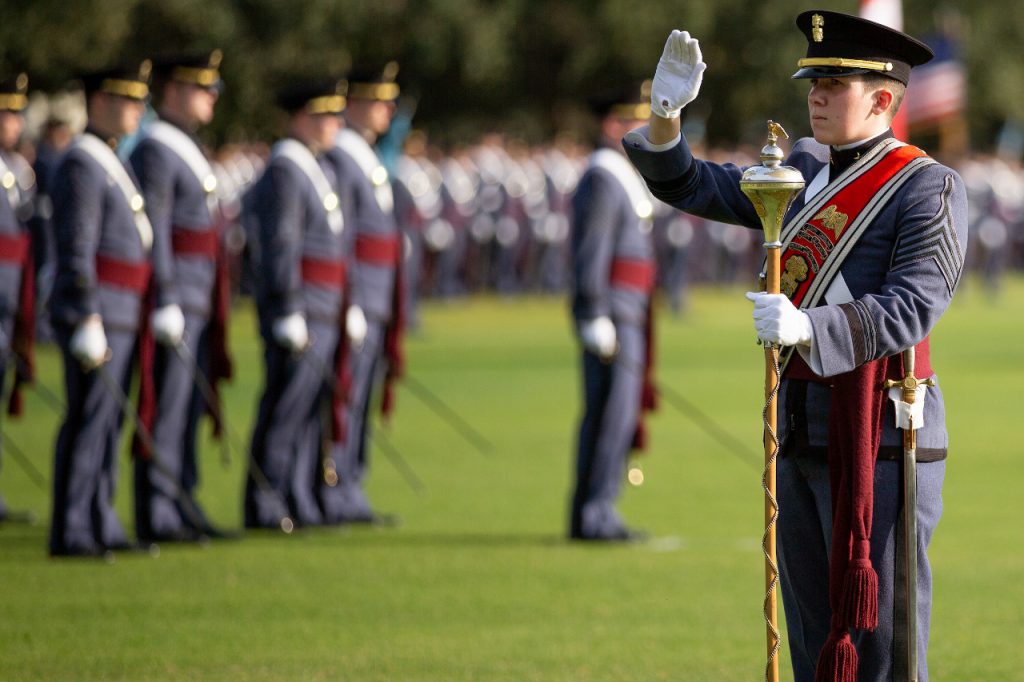 (Above) Cadet Hunter Crawley, The Citadel Class of 2019, first woman Drum Major for The Citadel Regimental Band and Pipes

As seen in The Greenville News, by Angelia Davis

Sarah Zorn chose The Citadel simply to get an education. What she earned in the process was a unique place in the school’s more than 176-year history.

Zorn, of Aiken, will graduate this year with a degree in business administration and the honor of being the first woman to lead the South Carolina Corps of Cadets as regimental commander at the college.

The Citadel was the only college Zorn applied to. She did so because it “kind of checked all of my blocks for what I was looking for.”

“I had a four-year Army ROTC scholarship and I knew I wanted to pursue active duty,” Zorn said.

She never dreamed or imagined that she would become the highest-ranking cadet officer in command of the entire student corps of 2,350. It was something that people had never seen before so it kind of opened their eyes, she said.

She is one of many South Carolina high-ranking females at the school, which did not admit a woman until 1995.

Crawley, a biochem major who is also studying psychology, decided to attend The Citadel partially because it is her father’s alma mater.

Being one of the school’s high-ranking females has been rewarding, she said, mostly because women are almost 10 percent of the Corps.

“So I enjoy being in a position where I can influence younger females and let them know that it’s OK to be a strong woman, it’s okay to be assertive and this is something you can accomplish,” she said.

Kathryn Christmas, a freshman mechanical engineering major from Easley, is attending the military school on a four-year U.S. Air Force Scholarship and has many academic accomplishments. Christmas is in the first class at the Citadel to ever have a female commander.

“I know how much of a pain it is in almost an all-male school, getting out in front of everybody, and then being as confident as she is kind of empowers all the females here, like we can accomplish that,” Christmas said.

Alexis Edwards, a senior physics major from Anderson, is the academic officer for the South Carolina Corps of Cadets. Edwards said in an email that she has built close bonds with women and men at the male-dominated institution and has not received any unjust treatment from men.

She would offer females considering The Citadel the same advice she’d offer a male: “If you are going to go for it, remember the reason why. That reason might be the only thing you have left at the end of the day to get you through to the next one.”

Allison Auten, a senior mechanical engineering major from Abbeville, ranked in first place in the Southern Conference air rifle competition. She has been a competitive marksman for eight years. She advises future female cadets to keep an open mind.

“It’s going to be hard at first,” she said. “It’s never really going to become easy, but if you stick it out long enough you’re going to have people who will back you up no matter what and that is something you can’t find in many places.”