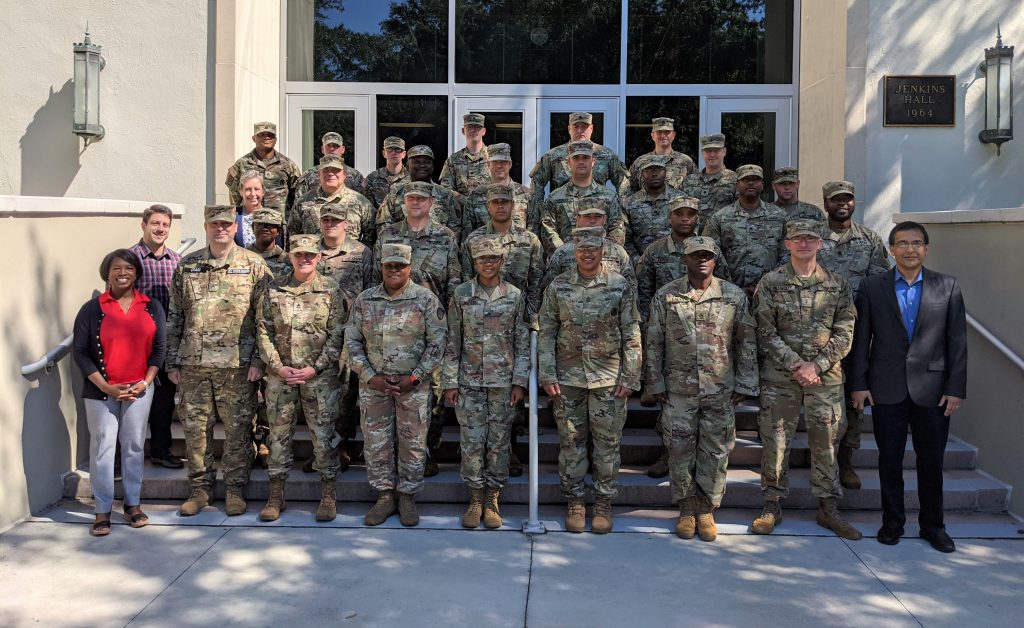 By Col. Linda Reidel, USA, deputy director of operations and outreach for The Citadel Dept. of Defense Cyber Institute

Members of the South Carolina National Guard are among the first groups outside to be trained by The Citadel Department of Defense Cyber Institute.

“The Citadel has always been a part of the South Carolina National Guard family. The opportunity to partner in training our soldiers builds the state’s cyber workforce capacity,” said Col. Linda Riedel, USA, The Citadel Department of Defense Cyber Institute deputy director of operations and outreach. “When you train a National Guard soldier, you are also training the civilian workforce and ultimately the community.”

“The Citadel Department of Defense Cyber Institute exists because there is a critical shortage of qualified cyber professionals within the Department of Defense, in both the military and civilian service areas,” said Banik. “Serving the South Carolina National Guard supports our three mission goals which include helping sustain a cyber-ready workforce, enhancing the nation’s cyber talent, and establishing a top talent management program.”

Banik hopes to work more with the state’s National Guard soldiers in the future.

“It was an exciting two weeks. There was a good exchange of knowledge connected to examples of real-world applications,” said Torry Crass, one of the instructors. Crass is the Chief Information Security Officer for the North Carolina Board of Elections.

A student in the boot camp, Maj. Latasha O’Neil, works fulltime for the South Carolina National Guard. She is an electronic maintenance supervisor at the McCrady Training Center which is located at Ft. Jackson near Columbia. O’Neil has a Master’s degree in Information Technology Management. “The training through in the Institute’s program is both rigorous and rewarding,” said O’Neil.

At the end of the training, the soldiers were able to test to qualify for certification from the CompTIA Sec+.  CompTIA Security+ certification is a global certification exam that validates the baseline skills you need to perform core security functions and pursue an IT security career.

“This training will make me more aware of what threats are out there and how to not become a victim,” said U.S. Army Sgt. Andrew Butler. Butler works as a fraud investigator for Wells Fargo in his civilian capacity.

The Citadel and the nation’s other five Senior Military Colleges received approximately $1.5 million of federal money each to establish cybersecurity institutes as pilot programs on their campus. The funds are part of a $10 million Dept. of Defense appropriation to the National Security Agency for these institutes included in the 2020 Consolidated Appropriations Act .

The Citadel has been designated as a National Center for Academic Excellence in Cyber Defense Education by the National Security Agency and Department of Homeland Security since 2016.