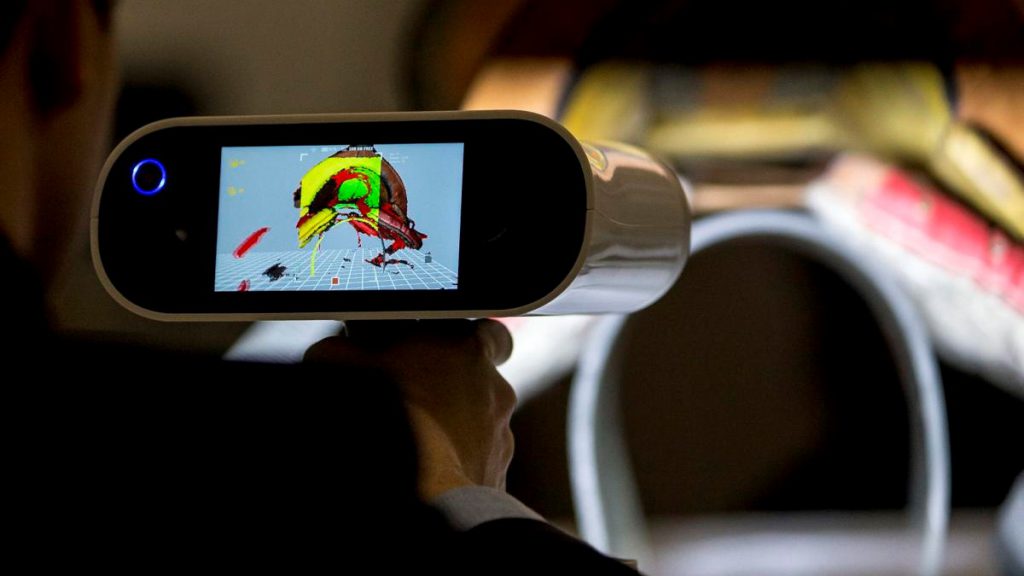 Photo: Pierce Huff scans a saddle at the Airborne & Special Operations Museum in Fayetteville, N.C. The saddle is like the ones used by the U.S. military in Afghanistan in operations after the Sept. 11 attacks that inspired the movie “12 Strong.” (Courtesy: Andrew J. Whitaker, The Post and Courier)

Bombs can claim ancient architecture, military equipment from a monumental mission can be set aside to collect dust, and collectibles can become collateral damage after one firefight. Those few items that have been preserved are on borrowed time, subject to aging and decay like any other material object.

But a professor and some students at The Citadel have found a way to capture military history indefinitely, a way to cork time in a bottle and capture the essence of war artifacts past their expiration date.

James Bezjian, an assistant professor of entrepreneurship at The Citadel, has tasked his students to save precious items using state-of-the-art 3D scanning technology that can upload an exact scan that shows the finest details. Their latest mission: saving military mementos at the Army Airborne & Special Forces Museum just in North Carolina, many of them from some of America’s most pivotal missions and conflicts.

In addition to helping keep some version of their exhibits alive long after its physical condition has deteriorated, it may be ushering in a new way to experience history.

“The museum of the future will be digital,” Bezjian said. “These are all made of finite materials that will one day wither and die. A digital imprint is forever.”

Two cadets, Pierce Huff and West Courtney, both senior business majors at The Citadel, spent a day at the Airborne & Special Forces Museum scanning a range of artifacts.

On 9/11, the world watched in horror as terrorists crumbled the Twin Towers and crushed American morale. The following day, Army Special Forces were sent into the Afghanistan mountains on the only transportation made available to them by the Middle Eastern tribes: small Arabian horses.

The heroic moment was depicted in the 2018 film “12 Strong,” starring Chris Hemsworth and Michael Shannon. A similar Afghan saddle fitted for a U.S. soldier that was given to former Secretary of Defense Donald Rumsfeld is the closest artifact that historians have been able to find. It’s now in the care of the Army Airborne & Special Forces Museum.

Huff and Courtney spent about 20 minutes taking images of the worn leather saddle with the scanner, which looks like the head of the robot from the Disney-Pixar animated film “Wall-E.”

Bezjian compares it to a “coloring book” and scanning the object fills it in and prepares it for the virtual world.

Horse Saddle 2 0 by jbezjian on Sketchfab

Within an hour, it’s uploaded to the internet. Every color is accurate, and no chip, rip or scuff in the saddle goes unnoticed in the virtual image.

“The Citadel is all about service,” Huff said. “Being able to save these artifacts before they are lost to time is a way to give back.”

Another artifact the Citadel students preserved was an Army issued M1 steel helmet worn by Walker Kirtland Hancock. He was one of the original team members of the Monuments, Fine Arts, and Archives Commission during World War II, tasked with recovering precious art and treasures that were looted by the Nazis.

He was portrayed, loosely, by John Goodman in the 2014 film “Monuments Men” that also starred George Clooney and Charleston resident Bill Murray.

Other items preserved by The Citadel cadets included a 1940s football helmet used by Maj. Gen. William C. Lee, known as “The Father of the U.S. Army Airborne.”

They scanned a German officer’s service cap from World War II, as well as a Thompson sub-machine gun. They even managed to capture a stuffed military service dog, a Belgian Malinois named Hector that served with the Special Forces before dying of natural causes.

The Citadel has two scanners, each worth about $30,000, that were provided by a donor. With multiple scanners, even larger objects can be uploaded to virtual reality.

One of the largest projects the team has taken on was scanning the rotor of Super-61, one of the Black Hawk helicopters shot down during the 1993 Battle of Mogadishu in Somalia.

Super 61 Rotor from Black Hawk by jbezjian on Sketchfab

In 1999, Philadelphia Inquirer columnist Mark Bowden wrote the accounts of the mission and wrote “Black Hawk Down: A Story of Modern War.” The true story was turned into an Academy Award-winning film two years later.

In 2013, the remains, mainly the rotor and parts of the nose, were moved from the crash site and brought to the Army Airborne & Special Forces Museum in North Carolina. Every detail, even dirt and dust on the metal can be seen in the scan.

Bezjian said there are critics of the technology, chiefly those who worry that the technology could remove an incentive for citizens to visit museums and see artifacts in person.

The Citadel is preserving artifacts digitally by asking for the museum’s blessing. The school has partnered with the Charleston Museum already and hopes to use it to help smaller museums that couldn’t afford the technology independently. Bezjian said the technology is also being considered by the Army Civil Affairs unit as a way to help preserve the artifacts and relics of war-torn countries.

“Ultimately, you can’t replace it,” Bezjian said. “But it’s re-creation for the sake of preservation.”