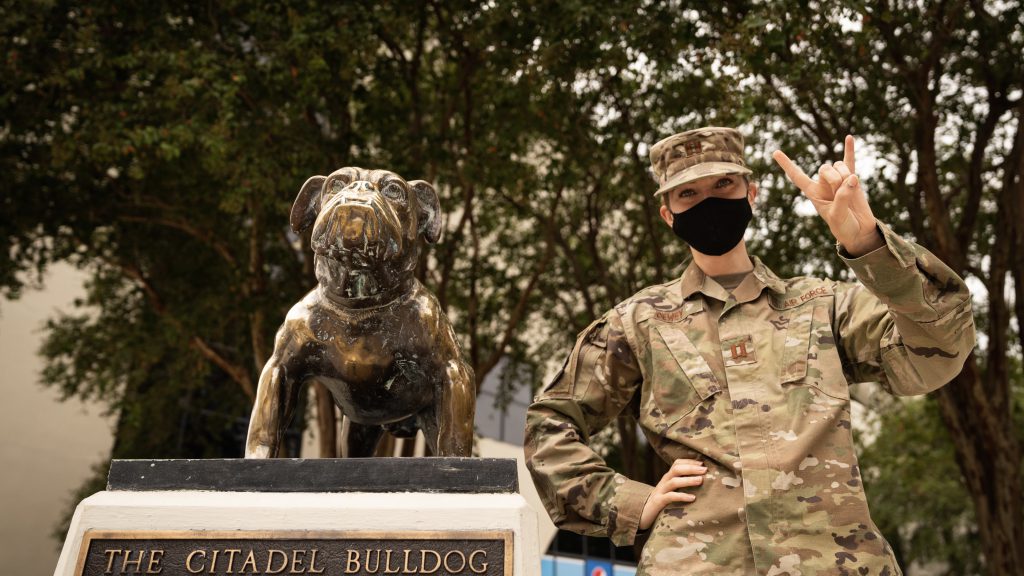 Even in an unusual football season, there’s at least one thing that can always be counted on — football fans pulling for their favorite team. Sometimes that team is their alma mater — sometimes it’s based on where they live or work — and sometimes fans find themselves stuck between the two.

That’s the position Capt. Julie Dewey, USAF, finds herself in this year.

Just one month into her new job at The Citadel, the Bulldogs will kick off their football season playing her alma mater, the University of South Florida, where she graduated in 2014.

Learn more about one of the college’s newest professors of Aerospace Studies — as well as who she thinks will win the game — below.

Why did you choose to attend USF?

I honestly don’t even remember — I think by process of elimination. My only major criteria when choosing a college were that it was in Florida and had an AFROTC program. I didn’t really want to go to any of the “bigger” schools in Florida and just sort of landed at USF.

How often did you go to football games while you were a student?

Pretty often. It was free for students to attend the games and, win or lose, it was always a fun time.

What was your favorite part of your time there?

I loved college, so that’s tough! I would say my favorite part was all of the awesome people that I met–including my husband. If I had to pick one specific memory, it would probably be my Air Force commissioning ceremony.

What made you want to work in a college ROTC department?

I have wanted to come back to AFROTC ever since I graduated. It probably has a lot to do with the fact that I had amazing instructors when I went through the AFROTC program, some of whom I still talk to today. I also just enjoy training and education and think I might want to be a teacher after my time in the Air Force.

How did you find yourself at The Citadel?

Mostly through luck and coincidence. My husband is also in the Air Force and, because of his job, he can only be stationed at a handful of installations across the country. Joint Base Charleston is one of the bases he can go to, and The Citadel happened to have an open position. I didn’t think the chances that I would be selected for this position were very high, but I applied anyway and here I am!

Did you know about The Citadel before coming to teach here?

I knew of The Citadel insofar as I’d heard of it and knew it was a military college, but that was about it.

How do The Citadel and USF’s ROTC programs differ?

The AFROTC programs are actually very similar. Our cadets are getting the same training as cadets at any other university. What’s very different is the 24/7 military environment that Citadel cadets live in, as part of attending a Senior Military College.

As an alum, are you a big fan of USF football?

I would say so. I watch the games whenever I can. We’re no football powerhouse, but that makes it even more exciting when we do win!

Who do you think is going to win? Who do you want to win?

Unfortunately, I think The Citadel is the underdog this weekend. It’s a tough choice but, because I teach some of the football players, I’ll be pulling for the Bulldogs. Either way, it’s a win-win.