Coming full circle: A lifetime of servant leadership behind the scenes 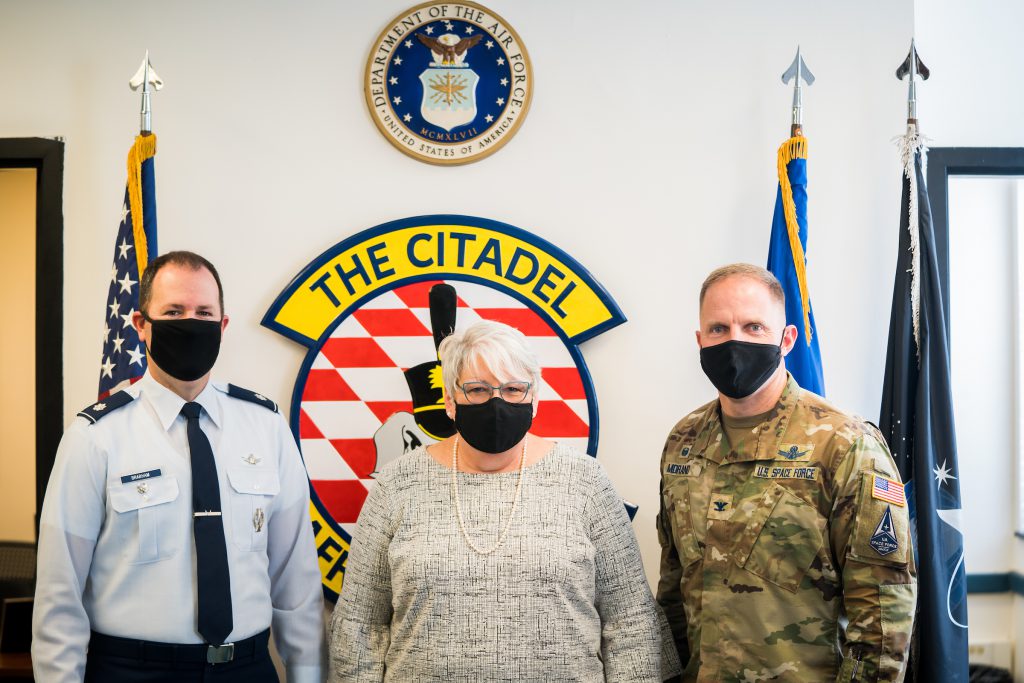 “Lt. Col. Brabham and Col. Morand both arrived as cadets at The Citadel when I came to the ROTC detachment here on active duty years ago. So, they went through their four years and I helped commission them. Now they are back, and I’ve worked for both of them.”

Cheryl Oliver, USAF (Ret.) and current administrative assistant at The Citadel with 28 years of service within USAF detachment on campus

Hundreds of Citadel graduates who serve, or have served, in the U.S. Air Force have gone on to be phenomenal leaders. Many of them — 713 individuals, in fact — owe part of what they’ve achieved to one special person: Ms. Cheryl Oliver.

While on active duty at The Citadel, Ms. Oliver was instrumental in providing the means for Air Force ROTC (AFROTC) cadets to commission. After retiring from the Air Force, she went on without missing a beat, working for more than two decades in the same detachment, this time as the civilian administrative assistant.

She came to The Citadel as Technical Sergeant Oliver where she gave advice and helped cadets through the commissioning process (1992-1998). The civilian role opened us as she was retiring from the Air Force — so she stayed.

Ms. Oliver continued to facilitate the commissioning process of many cadets and, according to her, she has helped commission 713 2nd Lieutenants.

Of the the cadets she helped, two decided to return to their alma mater. So, after years of military service, both Col. Matthew Morand, USSF, ’95, and Lt. Col. Brabham, USAF (Ret.), ’96, found themselves back at The Citadel with Ms. Oliver.

Space Force Col. Morand, who is commander of AFROTC Detachment 765 at The Citadel, remembers Ms. Oliver as being helpful and extremely knowledgeable back when he was a cadet — and that hasn’t changed.

“I love working with Ms. Oliver. She’s a wealth of knowledge and knows something about every program we have” said Col. Morand. “I tell all our folks to ask Ms. Oliver for advice. She’s been here and seen just about everything.”

Surprised Ms. Oliver was still here, he was excited to work with her again on a greater scale.

Lt. Col. Martin Brabham, who previously served as interim commander for AFROTC, has a similar story. He is currently a TAC Officer in November Company but previously worked in the Air Force department as an Operations Officer, where he said Ms. Oliver was a great help.

“Many would say that she loves The Citadel…and that’s true, but she really loves people” said Lt. Col. Brabham. “Especially airmen and cadets…and she’ll do anything to help them.”

I graduated from The Citadel and commissioned in the Air Force in 1995. Ms. Oliver was Technical Sergeant Oliver at the time and helped me (and all my classmates) prepare for commissioning. While she didn’t technically commission us, she did everything else behind the scenes to make sure we commissioned. She created the orders to send me to Field Training at Maxwell AFB, Alabama in the summer of 1994, and helped make airline reservations to get me there and back. She made sure we were paid a monthly stipend and that any Air Force scholarships were paid. She scheduled our DoD medical appointments and made sure we got to the base for them. Basically, she and the other NCOs did everything for us to make sure we’d commission on time.

I didn’t know Ms. Oliver was still here until I called the Detachment from my last assignment. I was pleasantly surprised.

I love working with Ms. Oliver. She’s a wealth of knowledge and knows something about every program we have. I tell all our folks to ask Ms. Oliver for advice. She’s been here and seen just about everything.

I love being back here at The Citadel and I’m sure Lt Col Brabham will tell you the same thing. This place had such a huge impact on my life and my career, I can’t think of a better place to work and hopefully make an impact on the next generation of cadets.

Her advice – Listen to your NCOs no matter where you go. They have lots of experience and will take good care of you if you listen and take care of them.

Col. Morand really hit on many of the key points below with regard to “Ms. Cheryl” as we all love to call her now. Back in the day, she was Sergeant Oliver to all of us, and we loved her just the same! Her advice today, as well as her willingness to listen, is unwavering. Many would say she loves The Citadel…and that’s true, but she really loves people. Especially Airmen and Cadets…and she’ll do anything to help them. It’s in her DNA. She has served both her country as an Airman and South Carolina as a state employee for a combined 40+ years…along the way helping young people navigate the early course of their careers. I am proud to have served with her as an Airman, and now as a SC employee.

I graduated from The Citadel and commissioned into the USAF in 1996.  Technical Sergeant Oliver was ALWAYS right there to help! As Col. Morand pointed out, the administrative tasks to commission a new 2nd lieutenant are many…and they are all extremely important…and they all have to be done right the first time! The easiest way to say it…any time that I needed anything as a cadet, Ms. Cheryl was there. That’s what I remember, and that’s what stuck…more than anything she ever said to me. It was her customer service approach to being an NCO and an Airman. She cared…and she still does. I’ve remembered that, and I’ve tried to emulate that throughout my career, also. I still do my best to take Ms. Cheryl’s approach now that I’m a TAC in November Company.

Returning to my alma mater as the AFROTC Detachment 765 Ops Officer in 2017 was pretty special…I didn’t know that Mrs. Cheryl was on staff here until I saw her name on the detachment’s USAF recall roster. I immediately recognized her name, and knew I was going to be in good hands! Upon arrival, I served as the interim commander for several months. Ms. Cheryl really helped me out tremendously; especially with everything going on…beginning of a new school year, meetings with the Commandant, meeting with the college President, evacuating for a hurricanes, etc, etc,. She kept me on point. Just as Ms. Cheryl taught me all those years ago…“trust your NCOs … they’ll take care of you!” I certainly did throughout my 24 years on active duty, and I trusted her immediately upon returning to campus.