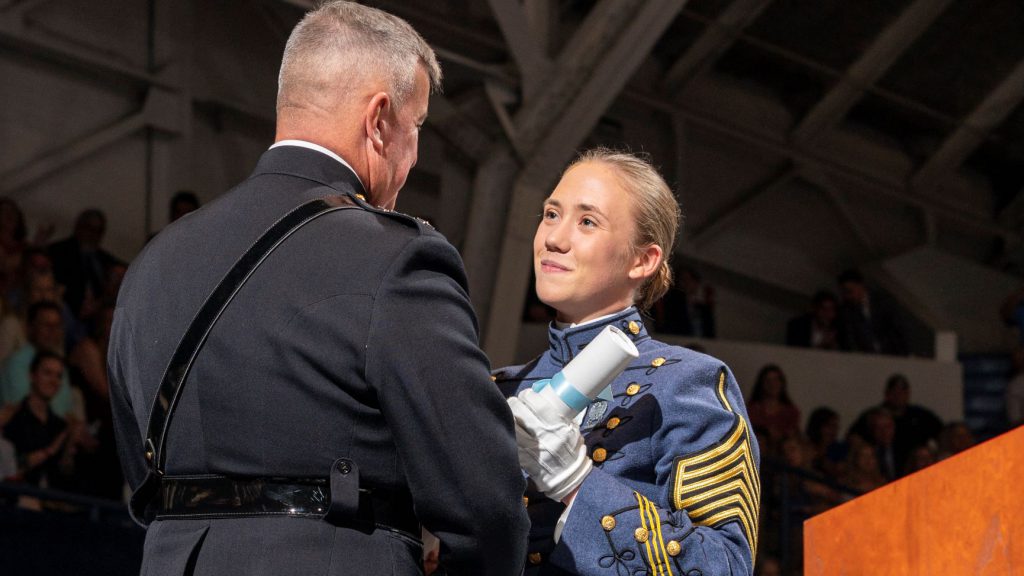 For the first time in the Citadel’s 176-year history, the formerly all-male military college in South Carolina will graduate its first female regimental commander.

She was named one of the New York Times most memorable people of 2018. She’s been photographed by the famed Annie Leibovitz. Her name is Sarah Zorn, and she’s the first woman to lead cadets at The Citadel, the formerly all-male military school in South Carolina founded in 1842. Yesterday she graduated as an officer in the U.S. Army. South Carolina Public Radio’s Victoria Hansen has more from Charleston.

UNIDENTIFIED PERSON #1: And the grade of second lieutenant do solemnly swear that I will support…

VICTORIA HANSEN, BYLINE: Standing in the background, right hand raised, her blond bun tightly wrapped at the nape of her neck, Sarah Zorn takes an officer’s oath with nearly 100 other cadets. She’s about to get pinned, commissioning her as a second lieutenant. But she has to wait. Alphabetically, Zorn is used to going last. But at this school, she is very much a first, the first female regimental commander in The Citadel’s long-storied history, leading 2,400 mostly male cadets. But Zorn says, don’t make a fuss about being first. She just wants to be the best.

HANSEN: Finally, Zorn’s name is called. She’s accompanied on stage by her cousins. Her mother died when she was just 16 years old. Zorn feels the loss, and the weight of those small gold bars, upon her shoulders.

ZORN: There’s a lot of responsibility that comes with being a lieutenant. I’m in the business of taking care of soldiers.

HANSEN: Zorn believes she has been accepted by The Citadel, but that wasn’t always the case nearly 25 years ago when a federal court ruling forced the military college to open its doors to women. The first, Shannon Faulkner – she left within a week, blaming death threats and sexist slurs. Since then, more than 500 women have attended. Zorn’s roommate, Cagney Irving, admits there have been whispers among some male cadets who doubted Zorn could lead as a woman.

CAGNEY IRVING: But she didn’t let that get to her. She always held her ground. And despite people’s negative comments, she would just show them that positive side and that leader – that great leader that she is.

HANSEN: It probably didn’t hurt – Zorn can do 70 pushups in just two minutes and has three black belts in martial arts. She’s also mentally tough – losing her mother and then her aunt who died during her freshman year. In high school, Zorn found a mentor in her junior ROTC instructor, Gary Syme (ph). He helped her get a four-year scholarship. Syme also gave Zorn’s first salute, wiping tears behind his tinted glasses.

GARY SYME: I’ve got a lot of respect for her – very proud of her.

HANSEN: Zorn’s cousins, Allen and Jenn Marfit (ph), have long cared for her, as well.

JENN MARFIT: Nothing was ever given. Anything she has is because she worked very hard to get what she had.

HANSEN: Now they’re patiently trying to help her pack. Zorn carefully hangs up her full dress uniform, which will be donated, displayed and archived at The Citadel. She gazes one last time out the giant window overlooking the parade field. Women have never before been allowed to stay in this room. Still, there’s one more stop on the way down to that iconic field. The first female regimental commander, who often has to wait to go last…

ZORN: And, look; we survived, female regimental commander and all.

HANSEN: …Gets the last word at graduation.