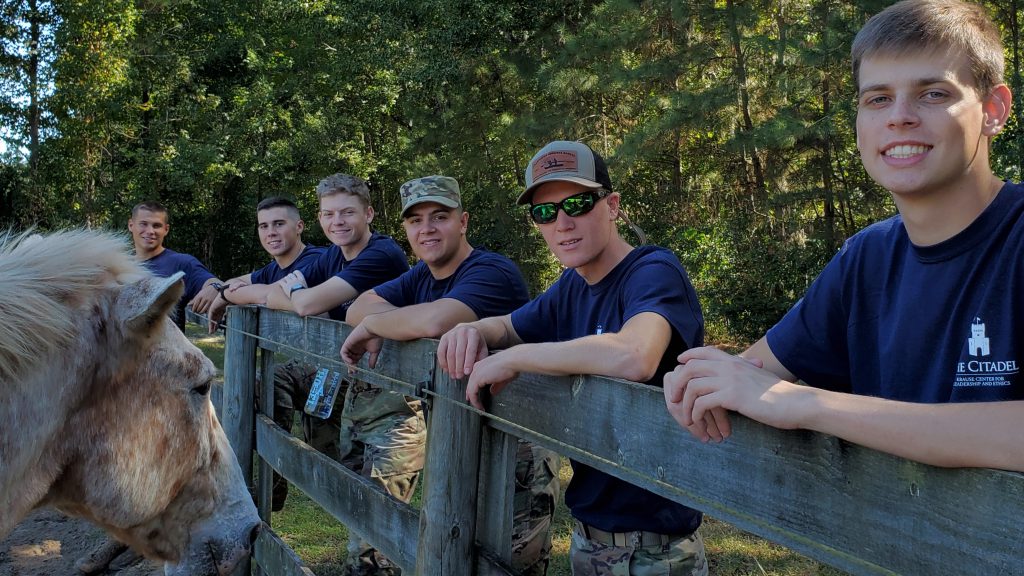 Over a dozen horses and other farm animals are grateful to the team of more than 10 cadets who landscaped their pastures, washed their trailers and, of course, hand fed them treats.

The sophomore cadets traveled to Hollywood, South Carolina, where Livestock & Equine Awareness & Rescue Network (LEARN) provides horses with much needed rehabilitation and love. LEARN is a volunteer-run horse rescue that has been rehabilitating horses from across the state and educating the community since 2009. The nonprofit has already cared for over 300 horses, most of whom arrived malnourished.

Taking care of the rescue horses at LEARN is one of over 20 hands-on projects through which cadets served others during the Class of 1979 Leadership Day, on Oct. 20. This is when cadets at The Citadel replace classes with service opportunities in the Lowcountry as well as leadership training. The cadets arrived before 9 a.m. and were prepared to stay all day if needed. After hours cleaning stables, clearing brush and grooming the horses, cadets still had the energy to ride the horses.

Mason Wilkinson, a finance major from Prosperity, South Carolina, knows there are many ways to make a difference, but he hadn’t given thought to caring for horses until choosing an assignment for Leadership Day. His first inclination was to volunteer to pick up trash. However, there were already many cadets signed up for that option, and he knew he could be useful at the rescue too.

Wilkinson was quickly befriended by a leopard Appaloosa mule named Eddie (short for Edisto) who followed him around the pastures.

“Helping others is a good thing to do,” said Wilkinson, “but also someone could be having a bad day, so you never know when the simplest thing could help them out.”

Others have been there for Wilkinson. He expressed gratitude for the work of an upperclassmen who held him accountable for his studies. Now, Wilkinson holds rank as a clerk for Delta Company, which enables him to provide administrative support to his company.

The Class of 2024 reported for work with enthusiasm, energy and an eagerness to give out animal cracker treats. Eddie, in particular, looks forward to next year’s Class of 1979 Leadership Day when a new class of cadets puts their hooves on the ground.

Alaina Rink is a graduate assistant in the Office of Communications and Marketing while pursuing a master’s degree in English. She earned her undergraduate degree from the College of Charleston in secondary education English and taught in the Charleston area for four years.