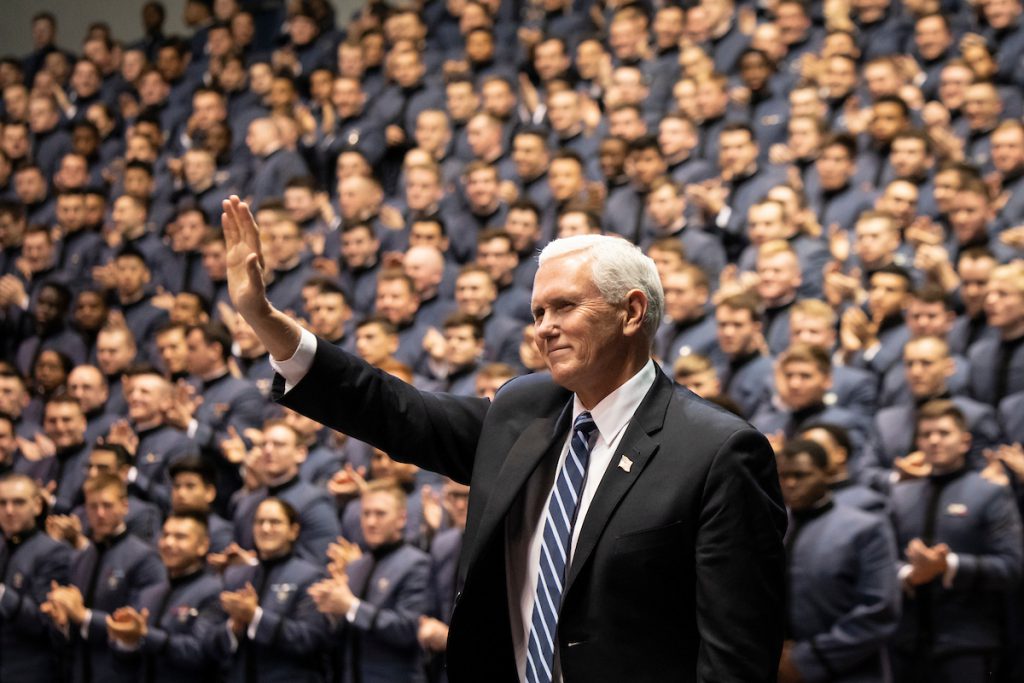 The 48th Vice President of the United States of America, Mike Pence, spoke to The South Carolina Corps of Cadets on the afternoon of February 13, 2020, in McAllister Field House on The Citadel campus.

After being introduced and accepting a gift from Cadet Col. Richard “Ben” Snyder, Mr. Pence drew raucous cheers when he said:

I really couldn’t be more grateful to address such an extraordinary group of young men and women. And as a small token of my appreciation, I have instructed the Commandant to extend amnesty for all qualified candidates — (applause) — effective immediately.

At The Citadel, sometimes the president of the college, or high ranking officials such as the governor or a visiting vice president of the United States grant “amnesty” to the Corps, meaning many cadets with common infractions will not serve their confinements or walk all of their tours.

Speaking for almost 30 minutes, Mr. Pence reflected on how the college prepares cadets for a service-focused life:

Just as important as the lives you fought to defend are the ideals you sought to preserve, that of a citizen-soldier, always disciplined, always honest, always true to your core values honor, duty, respect. They are the hallmarks of every graduate of The Citadel.

Men and women of your caliber could’ve gone to any school in the nation, but you chose the harder path.  Even when you were a lowly “knob,” you swore to uphold The Citadel honor code that the “Cadet does not lie, cheat or steal, nor tolerate those who do.”

The South Carolina Corps of Cadets truly is full of amazing Americans, like a senior in Kilo Company, Army ROTC graduate from American Samoa.

I’m told that when she was growing up, she used to help her family take care of her great-grandmother, and that experience inspired her to become a nurse.

But when she was debating where to go to college, it didn’t take her long to decide where to go.  Her father had served in the U.S. Army for nearly 30 years, and she was drawn to The Citadel’s sense of discipline and accountability, as I was told.

And she made the most of her opportunities here.  Today, she is a Gold Star/Deans List cadet, and her parents and her community couldn’t be more proud.  Would you join me in recognizing an incredible young woman who, this May, will become The Citadel’s first Army nurse, Cadet AnaMalae Tia.

Or like another member of this corps, like a pre-med biology major from, actually, Irmo, South Carolina.  Last year, I’m told, he was named one of the top 10 Army ROTC cadets in America, and it’s not hard to see why.
A member of the Phi Kappa Phi Academic Honor Society, Pre-Med Society, and even the Citadel Flying Club.  And just before he graduates in May, he’s going to accept a commission in the United States Army.  Join me in thanking and recognizing Cadet Paul Rhyne.  Where are you, Paul?  (Applause.)

The truth is, AnaMalae and Paul are just emblematic of each and every one of you.  You all have your own stories.  You all answered your own calling to be here.  You answered the call of citizen-soldiers sworn to uphold the highest ideals.

You’ve gone through some rigorous years of training here at The Citadel — a time of great personal discipline — I challenge each one of you: Don’t lose that.  Discipline is the foundation of all accomplishment.  Be an example of self-discipline to the men and women you lead, whether that’s in our armed forces or whether in private life.  You’ll inspire them by your discipline without saying a word.

To lead others, you must lead yourself first.  And so cultivate — cultivate self-discipline.  It wasn’t just for The Citadel; it’s for a lifetime of accomplishment.  Cultivate all of these virtues, carry them from here, as you’ve already begun to do in this great school.  And I know, like so many generations before, the men and women gathered here will lead lives of consequence and distinction.

So, lead with integrity.  Be an example to those around you.  Serve with honor.  Take care of all of those that are ever under your care and set a personal and professional example.

While visiting campus, Mr. Pence was introduced to a group of cadets from his home state of Indiana during a private session and interacted with campus leadership. See more photos in the gallery below.

Read the full transcript of Mr. Pence’s speech provided by the Office of the Vice President, or watch a video of the speech below.