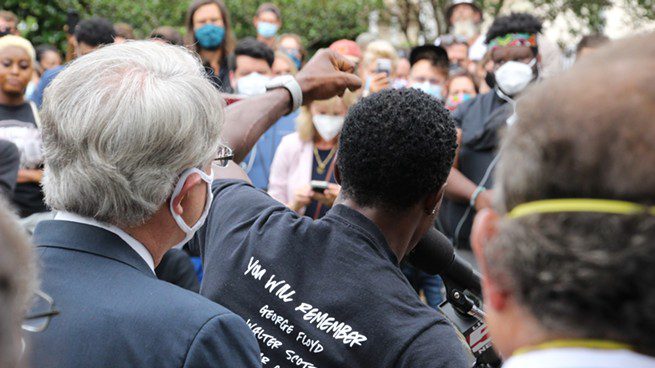 Note: Felice Knight, Ph.D., is a history professor at The Citadel who specializes in African American History with an emphasis on slavery during the early national and antebellum periods. Additionally, Knight is director of The Citadel’s Universities Studying Slavery Committee and serves on The Citadel Truth, Racial Healing and Transformation team. Knight was recently appointed to the City of Charleston Special Commission on Equity, Inclusion, and Racial Conciliation, which was formed to review City policies, practices, budget and other matters related to addressing racism and racial inequities and to make recommendations to City Council on ways to promote racial justice and racial equity in the City.

As seen in Charleston City Paper, by Heath Ellison

Charleston leaders added seven new members to the city’s new Special Commission on Equity, Inclusion and Racial Conciliation in a unanimous vote Tuesday. The commission, headed by Councilmen William Dudley Gregorie and Jason Sakran, plans to look at structural racism within the city and will conduct an internal review of city departments.

Tracy Doran, Alvin Johnson, David Rivers, Michael Better, Crystal Rouse, Felice Knight and Daron Lee Calhoun were appointed to the commission. Gregorie told the City Paper that the committee chose this group to avoid “the usual faces” and to get a “good mix of age, ideas, cultures.”

Each commission member will focus on a specific subcommittee such as history, housing and economic empowerment.

Daron Lee Calhoun, programming and social justice initiative coordinator at Avery Research Center, was appointed as a commissioner of the city’s internal review. “We will definitely be looking at all the city departments and seeing how we can use the racial equity lens to bring true equity and inclusion to these departments,” he said.

Calhoun singled out hiring and longterm systemic changes as something he wants to focus on. He hopes a full audit of the city’s departments will be conducted, similar to the racial bias audit of the Charleston Police Department. “It’s going to take money and we can’t just say we’re going to do this,” Calhoun added. “They have to be able to put something behind it.”

Crystal Rouse, who was elected to the subcommittee on youth and education, said she is excited to bring experience in education and anti-racism to the commission. “I look forward to working with fellow commission members and local citizens to continue the dismantling of systemic racism and racial inequities that have plagued our city and nation for centuries,” she said.

Sakran said there is no formal plan for the commission at this point.

In 2018, Charleston City Council passed a resolution issuing an official apology for its role in enabling chattel slavery by a 7-5 vote. The measure was spearheaded by Gregorie in partnership with the Sophia Institute’s Social Justice Racial Equity Collaborative. Earlier this year, the city voted unanimously to bring down a controversial monument to slavery advocate John C. Calhoun in Marion Square.

The racial conciliation commission was created June 4, soon after protests hit downtown May 30 over the killing of George Floyd at the hands of Minneapolis police. Some organizers and leaders in the black community have voiced concern that the commission is just another panel instead of a move toward change and action.

“We do need more action, but it’s a step in the right direction,” said Marcus McDonald, a local Black Lives Matter organizer.