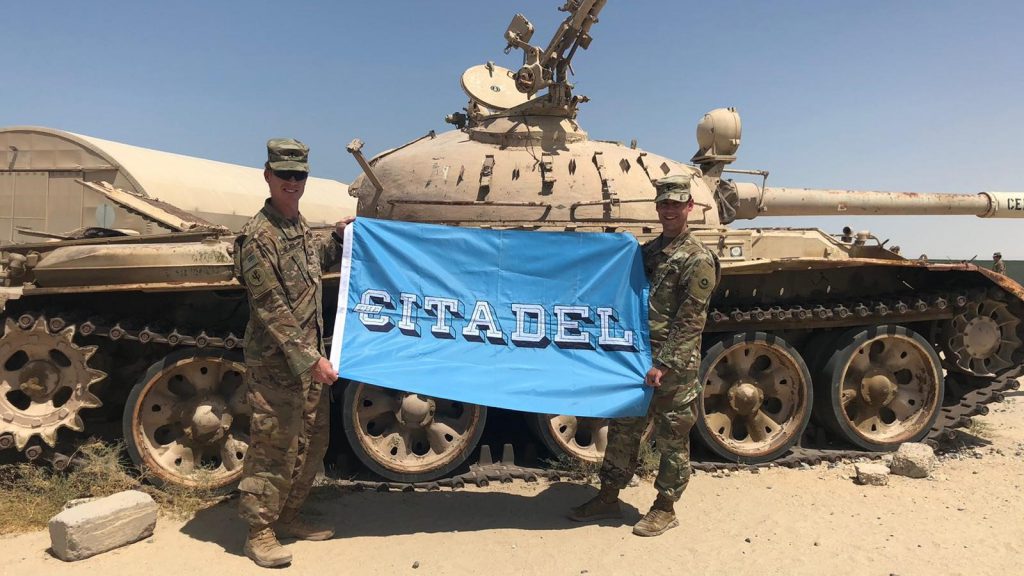 It’s a photo more than a decade in the making — two members of the Class of 2011, standing together at Camp Arifjan, Kuwait, holding a Citadel flag between them.

It was made possible when, earlier this month, Chaplain Zachary Honeycutt arrived to replace his fellow alumnus, Chaplain Daniel Biegger.

“As a chaplain, you’re constantly taking the initiative to train your team and increase your ability to plan and provide religious support during necessary operations,” said Biegger.

It is not uncommon for Citadel graduates to seek out leadership positions, where they can demonstrate the servant leadership they learned while in the Corps of Cadets.

“It’s always great to see how many Citadel graduates go on to join the ministry,” said Joe Molina, USN (Ret.), Chaplain to the Corps of Cadets. “Given our military college’s dedication to educating principled leaders, it’s only fitting that two Citadel alumni would consecutively serve in this position to guide American soldiers along their spiritual journeys.”

Shortly after Honeycutt left his North Carolina home to deploy to Kuwait, Biegger returned to the Tar Heel State where he’s serving as the Brigade Chaplain for the 518th Sustainment Brigade.

“Being able to carry on a mission that Danny helped build in an honor,” said Honeycutt. “Having an established friendship also simplified our transition phase. When I meet someone from The Citadel, there is already an element of deep trust that exists, even if I do not know the person.”

In addition to chaplain duties, Honeycutt also assumed responsibility for one of his former Citadel roommate’s projects, called the Bean of Life

“My Unit Ministry Team and I developed the “Bean of Life” Resiliency Center to assist in providing religious support and increasing morale,” said Biegger. “The Bean of Life is a coffee shop and recreation area that has a room with a TV, DVD Player, etc. Before, it was a trailer that had not been used in over two years, which we cleaned up, reorganized and repurposed into what it is today.”

In some ways, Honeycutt’s new role is why he began ministry in the first place. “I wanted to be able to serve and care for soldiers that were feeling the burdens that sometimes comes as a cost of war and military service,” he said.

When Biegger and Honeycutt were cadets at The Citadel, their friendship was solidified at the beginning of their junior year, when they first became roommates. They would go on to be roommates in their senior year, too. In addition, they were both Summerall Guards and both graduated from The Citadel as commissioned Army officers.

But their parallel paths continued, long after commencement.

“Zach and I are pretty much the brothers we never had,” said Biegger. “After graduating from The Citadel, we were roommates at Southeastern Baptist Theological Seminary. We both worked at the same jobs together. We both served as Battalion Chaplains together in the same Battalion. We got married roughly a monthly apart from each other. We were each other’s best man. We both have a set of twins.”

Just like a traditional family, this brotherhood extends beyond their professional lives.

“We currently live not too far from one another,” said Honeycutt in an email. “As I write this Danny, his wife and their twin boys are spending time with my wife and our twin boys. I count it a blessing to have friends that help take care of family in our absence.”

It’s this dedication to others, part of the servant leadership learned at The Citadel, that Honeycutt values most.

“The day in the life of an Army chaplain is really a day spent with the soldiers,” he continued. “We call it ‘muddy boot ministry’ and it simply means going where the soldiers are. Being present is one of the best ways to build trust, which is needed for effective ministry.”

In some ways, not much has changed since, just before graduation nearly ten years ago, Honeycutt received the John O. Willson Ring — awarded annually since 1911 to a senior elected by his or her peers as the finest, purest and most courteous member of the class.

“Our mission is to provide religious support to all the soldiers who transition through Camp Arifjan,” continued Honeycutt. “Being able to care for these soldiers as they come and go, as well as provide a place that helps build morale and resilience, has truly been an honor of mine.”