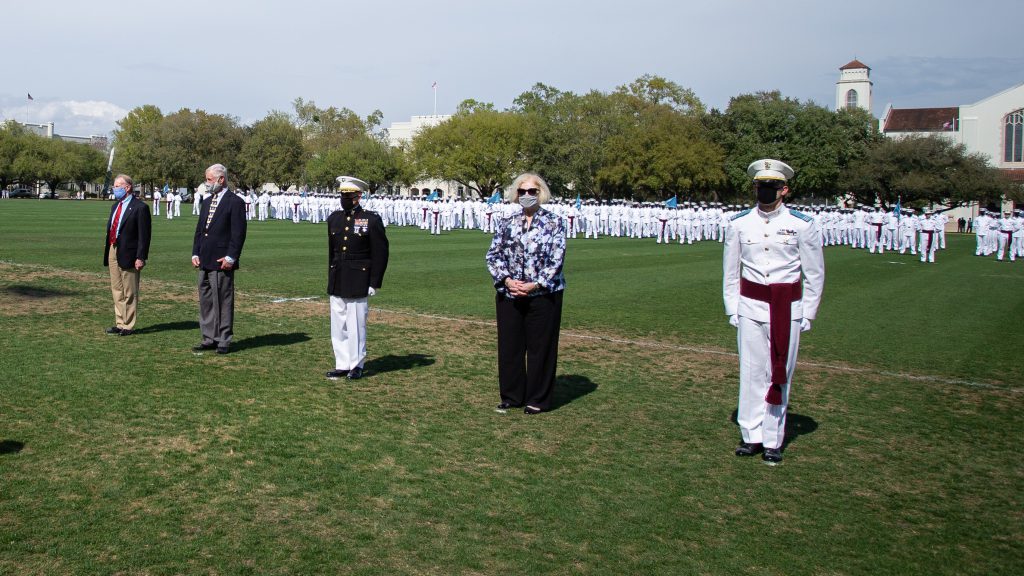 The Palmetto Medal Award, one of the highest awards presented by The Citadel, is normally be presented at the military review parade during Corps Day Weekend.

Due to the pandemic, this year’s Corps Day Weekend looked a bit different — but that did not stop The Citadel from presenting the Palmetto Medal Award.

Below are the four leaders who were recognized during the Oath Renewal Ceremony for the Class of 2024.

Caleb Lee Davis is a member of the Class of 1971 whose devotion and exceptional service to his alma mater spanned a 32 year career.

Davis joined the staff of The Citadel Brigadier Foundation in 1988 as assistant director and, in 1992, he became associate director. During his tenure, contributions to the foundation doubled. He initiated the phone-a-thons that increased both memberships and donations to the foundation. In 1989, he secured auction items for the inaugural Brigadier Foundation Auction and continued to support the event every year, helping to raise hundreds of thousands of dollars in support of athletic scholarships.

Davis served as a liaison for coaches who spoke to area Citadel Clubs, not only in South Carolina but North Carolina and Georgia as well, attending the meetings and organizing the coaches’ participation and travel. An ambassador for the Brigadier Foundation, he attended all home football games and assisted members with parking and game tickets. Additionally, he served on The Citadel Athletic Hall of Fame Board for fifteen years and was a member of the committee responsible for its restructuring.

For his humble and enduring stewardship and his loyalty to his alma mater, The Citadel Board of Visitors is proud to award Mr. Caleb Davis the 2021 Palmetto Medal.

Col. Charles M. Dunne, USMC (Ret.), is a principled leader and a decorated Marine who has dutifully served his nation and his alma mater.

After graduating from The Citadel in 1990, Dunne earned a commission in the U.S. Marine Corps, where he served faithfully in peacetime and on combat tours for more than 30 years. Among his numerous staff assignments, he served in the Marine Forces Central Command in Afghanistan. He also served as the commanding officer of the Marine Corps Forces Command Headquarters and Service Battalion while concurrently serving as commander of Camp Allen in Norfolk, Virginia.

For the past three years before retiring from the Marine Corps, Dunne has served as a professor of Naval Science and the commanding officer of The Citadel’s Naval ROTC unit, but his scope of influence reaches far beyond the Marine and Navy ROTC contract cadets to the entire Corps of Cadets, active duty and veteran students through the leadership and ethics classes he teaches. He has commissioned more than 80 Navy and Marine Corps officers during his tenure at The Citadel, and he has become a beloved fixture on campus known for his devotion to his students and his willingness to help.

For his service to his country, his loyalty and devotion to his alma mater, and his generosity of spirit, The Citadel Board of Visitors is proud to award Colonel Charles Dunne the 2021 Palmetto Medal.

Through her generous nature and heart for service, Patricia McCain Kinard has made The Citadel a better place for the past 17 years. Since she joined the Office of the President in 2004, Kinard has provided support to four college presidents. After she retired in 2016 as the special assistant to the president, she assumed the role of recording secretary to The Citadel Board of Visitors, the first woman in the college’s history to ever hold that position. In every capacity, Kinard has epitomized devotion to duty, passion for accuracy and an eagerness to help.

Beyond the president’s wing, Kinard has demonstrated her willingness to help other members of The Citadel community. She and her husband, Allen, have opened their home to become host parents to more than a dozen cadets. She was recognized by her peers as the Employee of the Year in 2007 and has been a generous donor of time and talents to multiple college organizations and a cheering fan of The Citadel Bulldogs.

Many church and community organizations throughout the Lowcountry and across the nation have also benefitted from the diversity and breadth of her philanthropic spirit.

In recognition of her devoted servant leadership, The Citadel Board of Visitors is proud to award Patricia McCain Kinard the 2021 Palmetto Medal.

Cadet Col. Nicholas James Piacentini is a natural leader whose strength of character and commitment to those around him make him the ideal cadet to lead and represent the 2,300-member Corps of Cadets.

With every leadership opportunity, beginning with his role as regimental clerk, Piacentini has demonstrated an aptitude for bearing increasing responsibility. In the spring of 2020, he was named regimental commander.  This highest-ranking position in the Corps is a demanding role in normal times, and an even greater challenge during a global pandemic. Yet with his characteristic determination, he has successfully faced every obstacle head on.

With the health and safety of the Corps foremost in his mind, Piacentini oversaw the strategic reorganization of the Corps into COVID bubbles, the implementation of the fourth-class system in two training battalions and the associated adjustments to the training schedule. In his leadership of the Corps through the longest cadre period in the modern history of the college, Piacentini has ensured the safety of his fellow cadets and the continuity of the Long Gray Line. As he prepares to embark on his career as a U.S. Navy officer, Piacentini leaves an enduring legacy.

For his selfless and exceptional service to The Citadel, The Citadel Board of Visitors is proud to award Cadet Colonel Nicholas Piacentini the 2021 Palmetto Medal.

South Carolina Corps of CadetsThe Citadel Board of Visitors