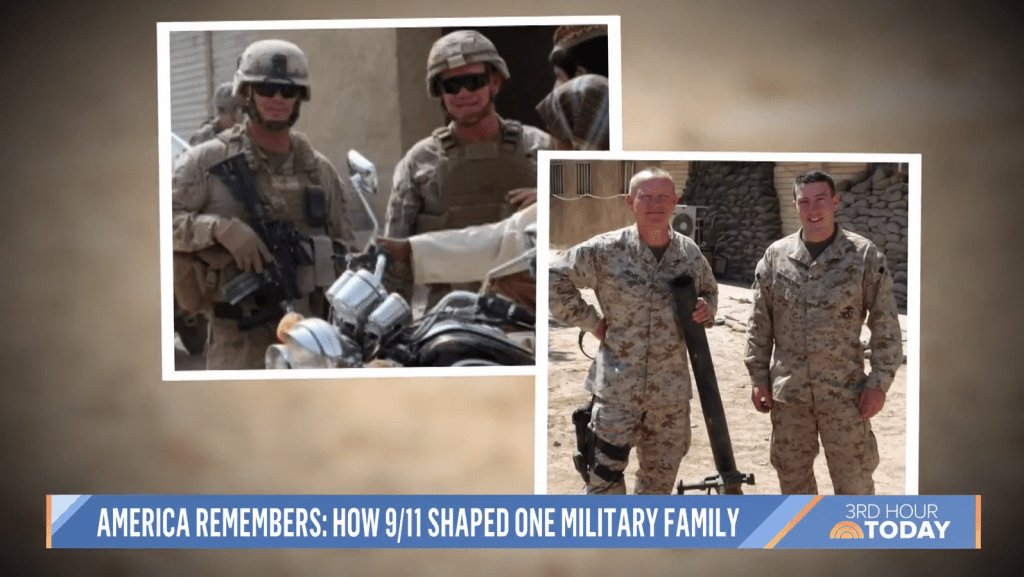 Note: Andrew Nicholson is a member of The Citadel Class of 2004.

As seen on TODAY, by Ree Hines

Larry Nicholson still remembers the moment 20 years ago when he learned the devastating news that soon reverberated across the globe — two planes had flown into the World Trade Center. America was under attack.

The now-retired lieutenant general was on a training mission in the California desert at the time, but as he explained in a segment that aired on the 3rd hour of TODAY Thursday, he instantly knew nothing would be the same.

“Feels like yesterday. It really does. It’s still fresh,” he told NBC News correspondent Hallie Jackson of the events of Sept. 11, 2001. “I think all of us fundamentally knew at that point that our world had changed forever — for everyone in uniform and many that would soon be in uniform.”

And with one son in high school on a military base and another attending The Citadel military college, he knew his own children were likely to be among the latter group.

“I just remember there was a feeling of, ‘When are they going? Where are they going? What’s going to happen?’” his youngest son, Kevin, recalled. “‘But it’s our parents that are going to do it.’ I remember being angry that I wasn’t old enough to go, to do anything about it.”

As for Kevin’s big brother, Andrew, he hadn’t been eager to join up. Although he was at The Citadel, his goal wasn’t to follow in his father’s footsteps. He wanted structure and discipline.

“But 9/11 happened and just changed the scope,” he explained. “I mean, you mature a lot when you see something like that happen for the first time in your life.”

The odds of such a thing were “slim,” according to Andrew Nicholson, who noted, “At the time, I didn’t realize, you know, how neat it was that we could do that together.”

But “neat” wasn’t exactly how family matriarch Debbie Nicholson would have described it. She’d already known the concern that came with having a spouse stationed in a war zone, but having her children in a war zone, too, weighed on her differently.

“It’s a lot harder on a mother,” she explained. “When your child is learning to walk and they fall, you’re there to grab them. But you can’t do that when they’re at war. You have to just pray and know that they’re doing what they want to do.”

And she wasn’t alone. The generation-spanning war efforts that launched in the wake of 9/11 left many other parents and spouses in similar positions.

“I don’t think we’re special in any way,” Larry Nicholson insisted. “I think we’re reflective of so many other military families that are out there.”

Families that didn’t necessarily fare as well as theirs did.

“I don’t think there’s a day that goes by that probably any of us don’t think about former teammates that didn’t come home,” he continued. “I don’t think you can go through that without sort of a constant reflection of the incredible young men and women that you serve with and how proud you are to be associated with so many of those folks.”