They met at The Citadel. 35 years later, a Fort Mill teacher gave his ‘brother’ a kidney 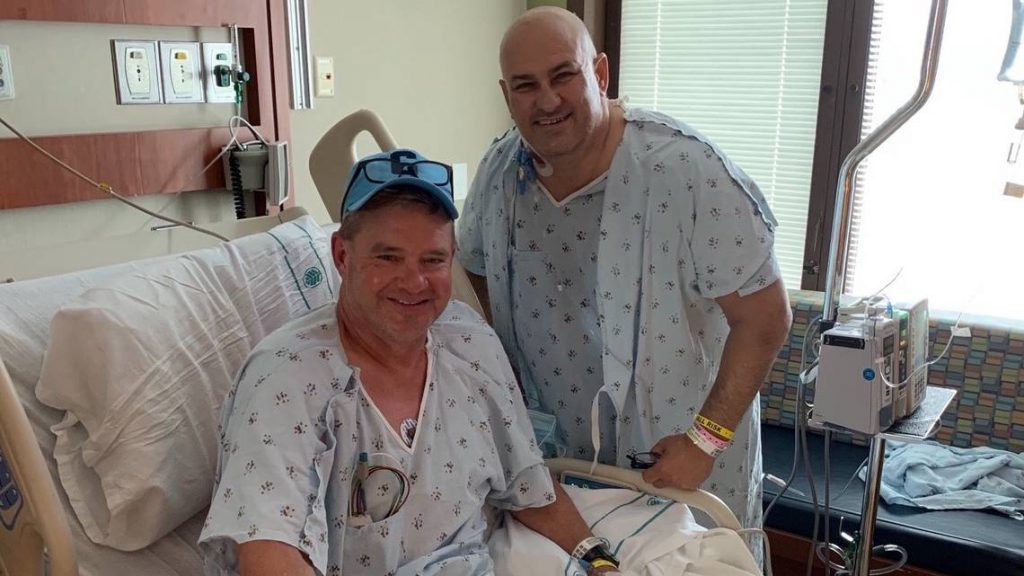 As seen in the Rock Hill Herald, by Tobie Nell Perkins

A sacrifice by a Citadel classmate who Settin hadn’t spoken to in 35 years got him the kidney he needed.

After two years of daily dialysis, Settin had almost given up.

“It’s kind of like being in a war every day,” he said. “You look at a machine, and realize that’s why you’re alive every day.”

Settin was diagnosed with stage four kidney failure in March 2019. His kidneys had completely failed following an autoimmune problem — his body had started attacking his kidneys.

Since then he had felt fatigued from even short walks. He slept at night in a recliner to prevent fluid from reaching his lungs — fluid retention is a symptom of kidney failure.

Settin says he was running out of options. None of his family members were a match and a cadaver kidney could take three to five years.

Then he got a phone call. On the other line was Bill White. The two hadn’t talked in almost 35 years.

Both graduated in 1988 from The Citadel, the military college in Charleston, South Carolina.

The Citadel is a brotherhood, Settin says, and graduating in the same class forms a bond for life. But White had not been his friend in school — they had mutual friends, but didn’t travel in the same circles.

“We were brothers, but not friends,” Settin said.

White had seen Settin’s health updates on the Class of ‘88 Facebook group. White’s blood type is type O-negative, called the ‘universal donor’ because it is compatible with all blood types. He knew he might be compatible to donate his kidney to Settin. And both lived in the Fort Mill, S.C., area — White teaches at Banks Trail Middle School.

“I saw a post on Facebook, this fellow Rob who had lost kidney function and had been on dialysis for two years,” White said. “I asked what his blood type was, I asked if I would be a fit.”

“I believe life’s circumstances speak to you,” White said.

White imagined what it must be like to live on dialysis for that long. He said he believes everyone should have a chance at a good life, and he felt compelled to help.

Settin checked with his doctors. They said the two could be a match.

That was December 2020. It was the last time the two would speak for four months.

In January, White went to the Atrium Health Transplant Center in Charlotte. He was a match, but he would have to pass more tests.

White passed the physical exam, but he was told his blood pressure was too high and he weighed too much.

Not wanting to give Settin false hope, White kept this to himself. But he decided he would start an exercise regimen and lose the weight.

White lost 30 pounds. And when he returned to the transplant center, he was approved to donate.

“You’re presented with these choices in life. And you take advantage of them when you’re given the choices to do the right thing. And I think intrinsically, it leads to a better life personally, and a better world for all of us,” he said. “So when I was focused on, ‘I’m going to give up a kidney.’ I was probably as pleasant a husband. As good a teacher. As good a dad that I could ever be. Because I had purpose.”

In March, he called Settin to tell him the news. Other than their first phone call, the two had not had a conversation in 35 years.

“There was a lot he was doing in the background before I even knew about this,” Settin said. “He said, ‘I hope you’re ready to go.’”

White had set a surgery date for April 28.

“He shows up and takes care of me,” Settin said. He chokes up at the memory.

In April, the two entered the hospital for surgery, at opposite ends of the same hallway.

For years, Settin’s kidney disease had caused clouded vision. When he woke up from his transplant, for the first time in two years, he saw clearly.

It was the first step to getting his life back.

Before, Settin says, “We were brothers, but not friends.” Now, the two share an unbreakable bond.

Definition of a hero?

Settin chokes up when he remembers the day he found out he was getting a kidney. And White apologizes for his tears when he talks about the purpose Settin gave his life.

When they talk about the surgery, White says his biggest concern was Settin.

They talk nearly every day and meet up often. Both fondly recall the first couple days after surgery, meeting in the hallway to walk laps around the hospital.

And White’s gift has spread beyond the two of them. Settin says he can’t quantify the number of community members from his church and Bible study who rallied to pray for the man who changed his life.

“I must have had thousands of people praying for Bill,” he says. And as their Citadel class waited for updates and cheered the two on, their classmates grew closer too.

“We ended up bringing our whole class together,” Settin says, “Which is a really cool thing.”

These days, Settin’s life is returning to normal.

Each day, he’s relieved that a dialysis machine no longer sits in his bedroom.

Still recovering, Settin is already going on long walks and attending his daughter’s soccer matches. He does not run out of energy.

White is back feeding his chickens and spending time with his family. He’s going back to teaching. And the two meet up all the time, whether for a walk or a match of tennis.

White doesn’t like to be called a hero, and he’ll stop you if you try. He didn’t do this to be a hero, he says.

But Settin sees it differently.

Many of their Citadel classmates have given their lives for their country, and he knows White reserves the word ‘hero’ for that kind of sacrifice. “But he’s a hero to me. And if you asked my wife and my daughter, he’s a hero to them.”