The many faces of the voice for the Corps 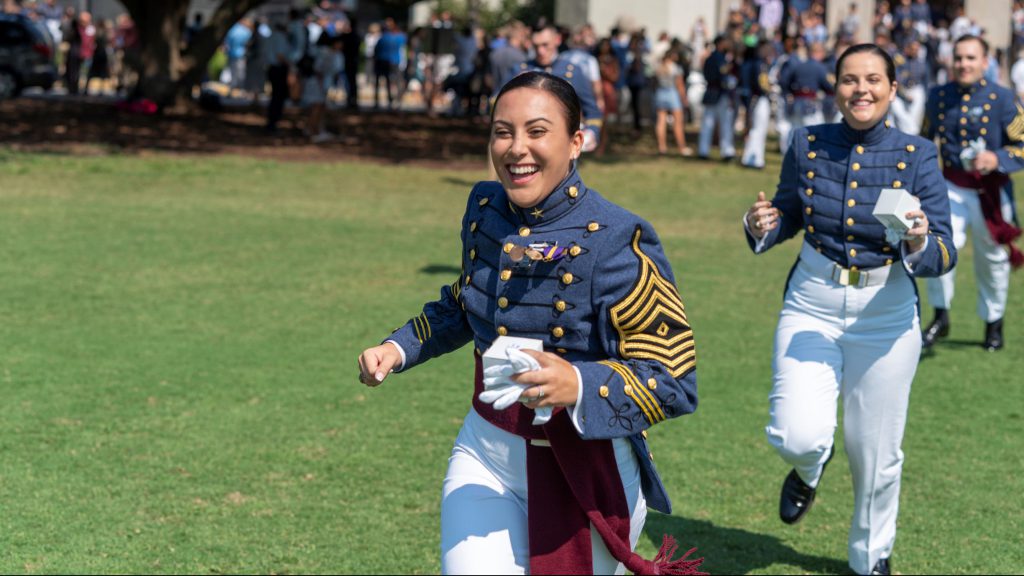 Photo: Breana Broad running across the parade field after receiving her class ring

She a first-generation college student who currently serves as the spokesperson for the South Carolina Corps of Cadets. But, in the past, she’s a two-time cadet-competitor in the Army Ranger Challenge, she’s on track to become an officer in the U.S. Army after graduating, and — if that weren’t enough — she was also Miss Charleston 2019.

“Getting to serve as the Public Affairs Officer gives me so many opportunities to network within the campus community, but also on a nationwide level,” said Broad. “That is why I love my job, because I get to spend it building relationships and rapport with people who I will see again in the future. It has been a humbling job so far, and I’m hopeful that I will be able to be a Public Affairs Officer in the Army one day.”

When Broad is not serving as the spokesperson for the Corps of Cadets, she’s either working on earning two degrees — one in Business Administration and one in Spanish — or she’s preparing for her future career in the Army.

That involves more than the 10 to 15 hours a week training with The Citadel’s Army ROTC department.

Broad also gets to represent the college on a national stage.

In October, Broad was a part of two Citadel Army ROTC delegations. She traveled to Washington, D.C., with the Charleston chapter of the Association of the United States Army (AUSA) and, after that, she led a team of cadets at The Spartan Brigade Ranger Challenge.

While at the AUSA Annual Meeting and Exposition, Broad got to see the Charleston Chapter win Best Chapter for membership of less than 200. She spent the rest of her time in the nation’s capitol, meeting high-ranking generals — as well as Medal of Honor recipients — and viewing exhibits set up by military contractors.

Broad also led one of the two Citadel cadet teams that participated in this year’s Ranger Challenge. Though her team didn’t win, Broad said, “I basically left my heart and soul in the field somewhere.”

The competition takes place for three days on a non-tactical course, and the mission is to challenge cadets’ mental and physical toughness and to develop leadership while fostering teamwork.

After graduating, Broad is expected to accept a commission into the U.S. Army, where she hopes to join either the Transportation Corps, Adjutant General Corps or Quartermaster Corps.