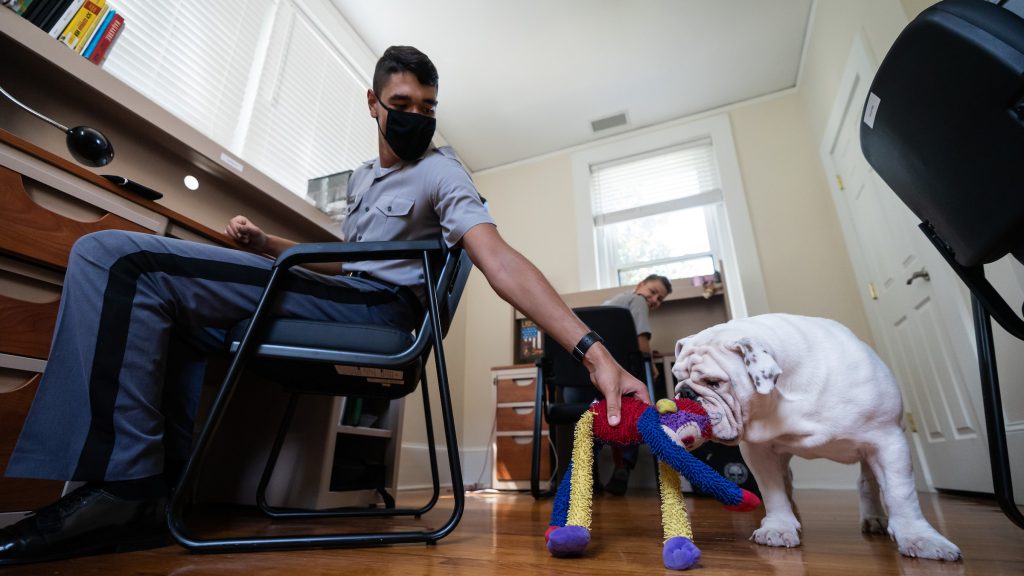 As seen on WCBD — Count on 2, by Jasmine McKoy

“It’s an opportunity to bring morale to the core and provide new traditions that can last way beyond our time here,” said Marrik Kelley, Cadet Mascot Handler.

A new tradition at The Citadel, involves a furry new friend.

Meet Gen. Mike D. Groshon aka G3, weighing in at 70 pounds and bringing a whole new feeling to campus.

“He’s definitely boosting morale, especially right now,” said Regina Miles, team leader of the Mascot team. “We’re not able to leave much and everyone loves dogs. It’s literally a dopamine high when they see G, so it just makes everyone happy.”

G3 was named in honor of Coach Mike D, of The Citadel class of 1976, who passed away in 2016 who also cared for many generations of mascots.

“Mr. Mike Groshon was Mr. Citadel, the papers have been calling him that since his time in the ’70s,” said Kelley. “Just somebody who uplifted so many people and was there for so many others. To be able to honor him in such a way to not only name the mascot after him but to name the house itself after him, means a lot to many people.”

The new mascot program is already making a change and will mean a lot to the many cadets of the future.

“Before last year, this wasn’t a thing,” said Sienna Gonzalez, Sophomore Mascot Handle. “So this being an actual rank and then actually giving something cadets can look forward to, and being able to be apart of is going to give them that much more to look forward to in their years to come.”

G3’s presence will come in handy when it comes to facing competition.

“So I know not many schools have a mascot program so I think it’s definitely awesome our school gets to be added to that list,” said Gonzalez. “It gives us a little edge over other teams.”

As cute as G3 may be, the job isn’t always easy.

“A lot of people think that it’s just playing with a dog all day,” said Miles. “It’s really not. There’s a lot of planning that goes into it. He’s very valuable to this school, he’s not just a pet.”