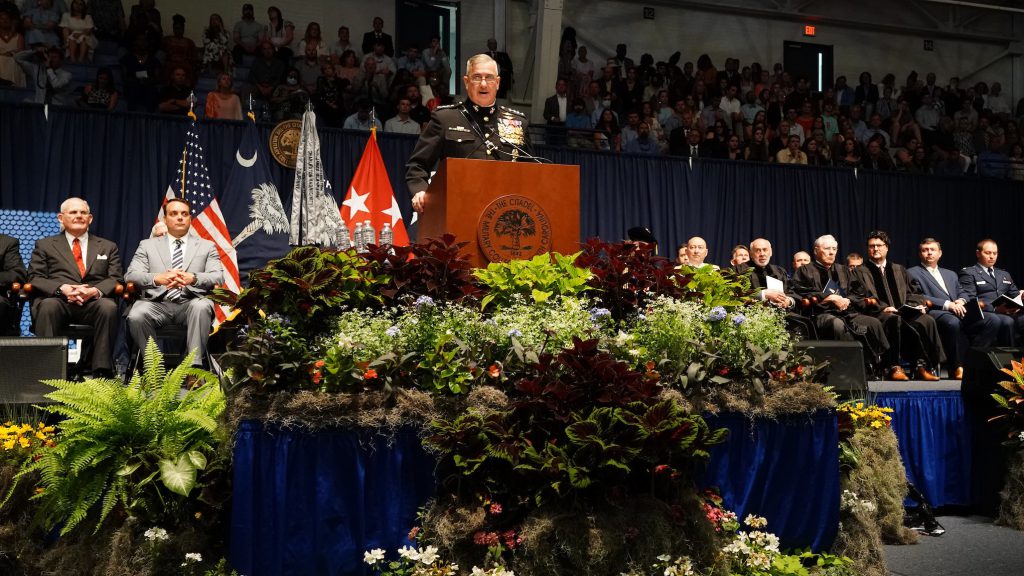 The Citadel Board of Visitors presented honorary degrees to five recipients during the commencement celebrations for the Class of 2022.

Honorary degrees are awarded to the speakers for the commencement ceremonies for The South Carolina Corps of Cadets and The Citadel Graduate College, as well as those who have demonstrated exceptional commitment to the college during their lifetime.

Below are the citations for each of this year’s honorary degree recipients.

Colonel Anthony L. Baggiano, United States Air Force, Retired, graduated The Citadel Class of 1961 and then served his country for twenty years as an Associate Professor of mathematics at the U.S. Air Force Academy and service in Vietnam. He also served as the Commander of the U.S. Air Force San Antonio Data Services Center.

Colonel Baggiano has served on numerous boards, including the U.S. Olympic Committee Board of Directors where he served as Chair, the Pan American Sports Council, and the Air University Foundation Board of Trustees. He is currently on The Citadel Alumni Association Board and is a member of the Executive Committee.

For his service to his nation and to his alma mater, The Citadel Board of Visitors is proud to award Colonel Anthony L. Baggiano the honorary Doctor of Public Service degree.

The Honorable Charles J. L. Brooks has been a successful real estate developer for more than fifty years. His projects included hotel chains, restaurants, offices, residential communities, and country clubs. He is a 1969 and 1971 graduate of the University of South Carolina with degrees in Commercial Education and Accounting. Mr. Brooks spent his formative years working for several Fortune 500 companies in divisional accounting management.

Mr. Brooks served on numerous public boards and commissions, including Richland County, the City of Columbia, and the State of South Carolina. He is the current Chairman of the Board of Zoning for Columbia and was recently appointed a Commissioner on the South Carolina Board of Accountancy by Governor Henry McMaster.

In recognition of a lifetime of service to the state of South Carolina and to his local community, The Citadel Board of Visitors is proud to award The Honorable Charles J. L. Brooks the honorary Doctor of Commerce degree.

The Honorable J. Gary Simrill earned his bachelor’s degree in marketing from Winthrop University in 1991 and the following year joined the South Carolina House of Representatives, where he represents York County. He has been a representative since 1992 and currently serves as the House Majority Leader and Budget Subcommittee Chairman for Higher Education on the House Ways and Means Committee. He is the longest serving Republican in the South Carolina House.

Representative Simrill was the primary sponsor of the Infrastructure and Economic Development Act of 2017 leading to a boom of road widening and repaving projects that business leaders called for to protect South Carolina’s economy.

Representative Simrill has earned numerous awards, including the Society of the Maltese Cross in 2019, the 2020 Wilkins Award for Excellence in Legislative Leadership from the Riley Institute, Behavioral Health Services’ Legislator of the Year, and the South Carolina Advocates for Agriculture’s 2013 Advocate of the Year. Additionally, the South Carolina Chamber of Commerce named him the 2017 Public Servant of the Year.

Representative Simrill is active within his community. Among his civic commitments, he serves on the boards of Piedmont Medical Center and Camp Canaan.

In recognition of his remarkable service, The Citadel Board of Visitors is proud to award the Honorable J. Gary Simrill the honorary Doctor of Business Administration degree.

From 2006 to 2009, Admiral Stavridis served as the Commander of U.S. Southern Command with responsibility for operations in Latin America.  He was the first Admiral to serve in both positions.  Following his military service, he served as the 12th Dean of The Fletcher School of Law and Diplomacy of Tufts University from 2013 to 2018, where he earned a Ph.D. in international relations.

Admiral Stavridis has published twelve bestselling books on various topics, including leadership, oceans, maritime affairs, and Latin America, as well as hundreds of articles in leading journals.  He is a contributing editor for Time magazine and chief international security analyst for NBC News.  Admiral Stavridis is Vice Chairman of Global Affairs for The Carlyle Group and Chair of the Board of the Rockefeller Foundation.

Admiral Stavridis is renowned for his principled leadership and dedication to our country over his illustrious career as a military officer, educator, and business leader.

In recognition of a lifetime of service to his nation, The Citadel Board of Visitors is proud to award Admiral James Stavridis the honorary Doctor of Leadership degree.

Following college, Mr. Watts served as a fighter pilot in the United States Air Force and in a number of leadership positions nationally and internationally.

Watts was previously awarded an honorary degree from The Citadel in 2018.

Thomas R. Young, III, took to heart his grandfather’s advice to be active with the Chamber of Commerce, his church, and the community. His lifelong commitment to selfless service yielded numerous awards, including the 2019 Order of the Palmetto, South Carolina’s highest honor.

In addition to his extensive volunteer service at institutions such as the Spartanburg Rotary Club, the Spartanburg Hospital for Restorative Care, and the YMCA, Mr. Young was an active philanthropist, quietly mentoring countless cadets and modeling leadership. A proud graduate of The Citadel Class of 1974, he was a longtime member of the Brigadier Foundation and actively supported many athletic programs.

At the time of his death last July, Mr. Young was serving as president-elect of The Citadel Alumni Association and was scheduled to be installed as president only a few months later at the 2021 Homecoming in November. The Citadel and the Class of 1974 are pleased to be part of his legacy characterized by honor, duty and respect.

In recognition of a lifetime of service to the state of South Carolina and to his alma mater, The Citadel Board of Visitors is proud to posthumously award Mr. Thomas R. Young, III, the honorary Doctor of Humane Letters degree.