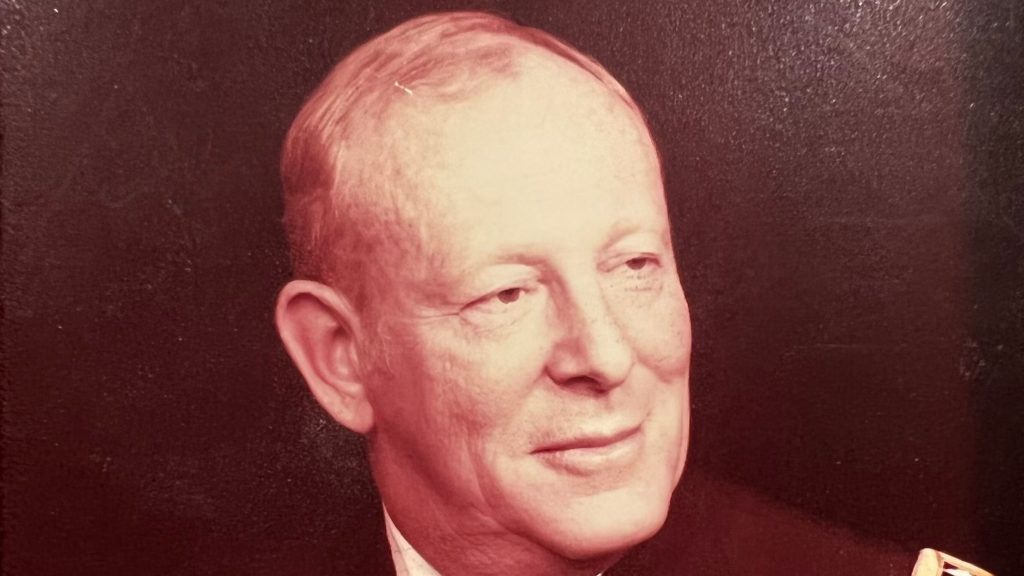 Before graduating from The Citadel with a Business Administration degree, he was a member of the Junior Sword Drill and Summerall Guards and also served as Mike Company’s commander.

A life member of The Citadel Alumni Association, he also served on the Board of Directors for The Citadel Foundation — called “The Citadel Development Foundation” at the beginning of his first term — from April 1985 – April 1993 and again from Oct. 1997 – April 2005

Multiple children and grandchildren have followed in Rosenblum’s footsteps to join The Citadel’s Long Gray Line.

Rosenblum’s internment service will begin at 2 p.m. on Saturday, Sept. 17, at The Citadel’s Summerall Chapel and Columbarium.

Obituary from the Savannah Morning News

Rosie was born on June 3rd, 1929, in Flushing, NY and raised during the Depression in Hell’s Kitchen in New York. In 1948, he graduated from high school and followed his older brother, Bob, to college at The Citadel in Charleston, SC. His gregarious personality and self-confidence allowed him to thrive in its challenging environment. There, he played varsity baseball, commanded Mike Company, was a member of the Junior Sword Drill and Summerall Guards, was sports editor of the college paper, and a distinguished military graduate. Upon graduation, he was commissioned as a Second Lieutenant in the US Army and promptly deployed to lead an Infantry Platoon in the Korean War. For the remainder of his life, his experience at The Citadel and leading men in combat would be the foundation for his long and prestigious military career, post military success, and community involvement.

After returning from Korea, Rosie married his college sweetheart, Laura Maree, at the St. Catherine’s School for Girls Chapel in Richmond, VA. Rosie and Laura would go on to raise seven children and move 22 times in his 33-year Army career. Highlights of his Army career include commanding an Infantry Company in the 82nd Airborne Division at Ft. Bragg NC and serving as a staff officer in Berlin, Germany when “The Wall” was built. He commanded 2nd Battalion 327th Airborne Infantry of the 101st Airborne Division and the 101st Division’s Support Command in Vietnam, giving the 2-327 the name “No Slack”, which still stands as their motto today. Between Vietnam tours, he graduated from the US Army War College and later served as the Executive Officer to the Army’s Director of Operations at the Pentagon. There, he received his first general officer star. It was this promotion that brought him to Ft. Stewart and Hunter Army Airfield, Georgia – a region which would later become his home. He earned numerous awards, decorated for valor three times, earned the Combat Infantryman’s Badge with a star for combat service in two wars, and was a senior rated paratrooper/jumpmaster. After retirement, the Officers and Soldiers of the 1st Brigade, 101st Airborne Division named him Honorary Colonel of the 327th Regiment.

In 1974, the Army Chief of Staff, General Creighton Abrams, selected Rosie to lead the Division’s reactivation and installation restructuring of the 24th Infantry Division at Ft. Stewart and Hunter Army Airfield, GA. As a 46-year-old, newly promoted Brigadier General, he realized he needed to quickly strengthen the bond between the military and the local community. On the heels of the Vietnam War, this assignment was considered an extremely challenging one, but Rosie’s determination and exceptional leadership allowed him to rise to the task. His unwavering pursuit of excellence and professionalism, coupled with his quick wit, intellect, unswerving honesty, and love of Soldiers propelled him to the promotion of Major General and the command of the newly re-formed 24th Infantry Division. In the process, he developed lifelong friendships with State Senator Tom Coleman, Mayor John Rousakis, local engineer Roy Hussey, WTOC anchorman Doug Weathers, and WTOC General Manager Bill Cathcart.

Following command of the 24th ID, he served in various General Officer billets with his final assignment as a 3-Star General in command of First US Army at Ft. Meade, MD. When he retired from the Army in 1984, Rosie and Laura chose Savannah as the community they called home. Post retirement, Rosie worked with US Representative Bo Ginn, and began consulting for private defense contractors as well as serving as the chair of Savannah’s Metropolitan Planning Commission. In 1988 he formed Rosenblum and Associates and continued his consulting business for the next 32 years. While he never officially retired from business, he finally ceased consulting at the age of 90. In 1990 his alma mater, The Citadel, awarded him an honorary doctorate in Military Science.

In 2006, he married Nancy Terry Hooten and enjoyed his time exercising at the Islands YMCA, playing golf at The Savannah Golf Club, solving world issues with his 1 to 3 Club, and attending Monday luncheons with The Rotary Club of Savannah. He was an avid reader and was never without a library book after exhausting his own collection. He was a 50-year season ticket holder for his beloved Washington Redskins and loved his NY (baseball) Giants, even after they moved to San Francisco. Rosie continued to enjoy a strong connection with The Citadel, having two sons and two grandsons graduate, and one grandson currently attending. He consistently attended football games through his 92nd year and remained a dedicated member of The Citadel Alumni Association and The Savannah Citadel Club. As a community volunteer, he served on the boards of YMCA of Coastal Georgia, The Rotary Club of Savannah, Starbase Savannah, St. Andrew’s School, The Citadel Foundation, Vietnam Veteran’s Memorial Savannah, among many others. He remained most proud of his seven children, fifteen grandchildren, and eight great grandchildren throughout his life, and was known for never missing a birthday.

Bachelor of Science in Business AdministrationSouth Carolina Corps of Cadets