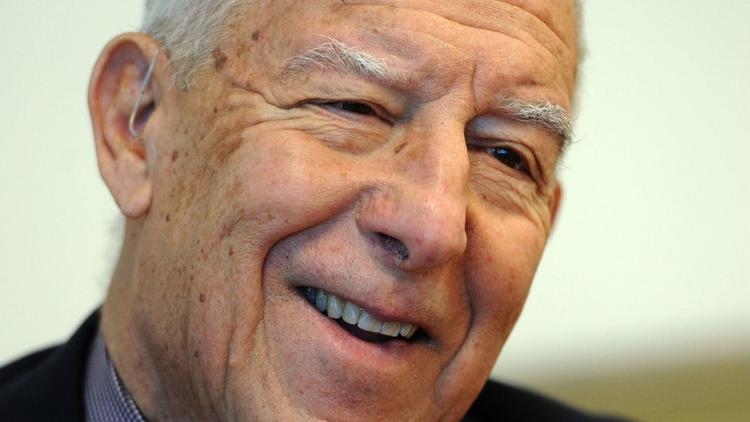 Note: “Augie” Miceli played a huge role in sending cadets to The Citadel, serving the Citadel Volunteer Recruitment (CVR) program. Its mission, under the guidance of the Citadel Alumni Association and the Admissions Office, is to recruit and assist highly qualified high school students through the enrollment process.

“Augie served in as an ‘unofficial’ CVR. His Calvert Hall students and players received favorite treatment in class if they provided proof of interaction (Citadel brochures, CVR business cards, etc.) with our CVRs at local college fairs. He was also known to tell his class stories about his life at The Citadel. His ‘war stories’ stoked many Calvert Hall students’ interest in becoming a cadet. Decade after decade Calvert Hall continues to be the single-best Maryland high school for sourcing Citadel cadets.” Scott Shotto, ’83, chairman of the Maryland CVR

“Augie Miceli was a giant of a man. His discipline, compassion, and genuine concern for each of his students evidenced the true character of a Citadel man. I remember his enthusiasm for teaching and watched him lead the football team to state championships. Recently, I had the opportunity to celebrate his retirement with other Hallmen who went on to The Citadel. Everyone knew how proud he was of The Citadel and he is the reason I decided to attend The Citadel. He was a role model to many young men and his legacy shall endure for future generations.” Duane Flemming, ’82, president of The Citadel Club of Greater Washington; Calvert Hall alumnus

As seen in The Baltimore Sun, by Colin Campbell

Augustine “Augie” Miceli Sr., the longest-tenured faculty member at Calvert Hall College High School, who taught thousands of students in a 60-year career as math teacher and football coach, died Saturday of acute myeloid leukemia at the Gilchrist Center hospice in Towson. He was 86 years old.

Mr. Miceli, the gregarious son of Italian immigrants, channeled the academic struggles he experienced in high school into his approach to teaching, arriving before school and staying afterward to provide extra guidance to students who needed it, said his son, Augie Miceli Jr., 55, of Towson.

Valuing effort over talent both in the classroom and on the football field, Mr. Miceli racked up 104 wins, seven straight Turkey Bowl victories and six football championships in 13 years as Calvert Hall’s varsity head coach. Hundreds of former students, colleagues and others attended his retirement party last month.

“He never felt like he went to work a day in his life,” said the younger Mr. Miceli. “He found something he loved: teaching and being a coach. We were lucky to have him for as long as we did.”

“I can think of no educator who leaves a greater legacy than Augie,” Kane wrote in an email to students, faculty, staff and alumni.

Augustine Frank Miceli was born July 15, 1932, at St. Joseph Hospital in Baltimore to John Miceli, a barber, and Maria Grace Majo, a homemaker. He was raised in Baltimore’s Waverly neighborhood, living for several years of his childhood in the apartment above his father’s Greenmount Avenue barber shop, his son said.

An Army veteran, Mr. Miceli attended The Citadel in Charleston, South Carolina, and served two years in Berlin during 1950s. He married his wife, Angela, and bought a house in Parkville, where the couple raised three children. The family vacationed every summer to Ocean City, where the Micelis had purchased four apartment units, staying in one while renting out, cleaning and maintaining the other three.

“We left for Ocean City the day after school ended,” his son said, “and came home the day before school started.”

Mr. Miceli began coaching football at Calvert Hall in 1958 and teaching in 1960.

He was named head varsity coach in 1974 and taught his teams the Delaware Wing-T, a four-running-back formation that forces opposing defenses to protect against the pass as well as the run, said Nelson Coffin, a freelance sports reporter who previously worked for Baltimore Sun Media and former student of Mr. Miceli’s who graduated from Calvert Hall in 1966.

Mr. Miceli, who also coached the offensive line at Johns Hopkins from 1990 to 1999, attended every Turkey Bowl game since he stepped down as coach in 1987.

Donald Davis, the current Calvert Hall head coach, said he “planted the flag and made the football program what it is.”

“Much of the impact he had on our program you can still see today — not just the on-field wins, but look at those players that played on those teams and what they did with their lives,” Davis said.

In 2015, the De La Salle Christian Brothers, the Catholic religious teaching organization, along with Christian Brothers at Calvert Hall, bestowed on Mr. Miceli highest honor for a lay colleague, naming him an affiliated member of the Brothers.

Joseph Brune, who retired in 2001 after 35 years as Loyola Blakefield’s varsity football coach, visited his longtime rival in hospice on the day before his death.

The two coaches shared mutual respect and had reminisced in a conversation last month about the coming 100th anniversary of the annual Thanksgiving Day Turkey Bowl rivalry game, he said.

“The memory I’ll carry of him is of a fierce competitor,” Mr. Brune said. “He always had his team ready to play, and I knew we’d better have our team ready to play, or it was going to be a bad day. He was good at what he did. He was a good coach and a good teacher.”

Mr. Miceli demanded 100% effort from his charges and was most pleased by those who delivered it — not those who performed best, said Frank Bramble, 71, of Towson, a former student and player of his who served as interim Calvert Hall president in the 2013-2014 school year and later chaired the school’s board of trustees.

Mr. Bramble said he became friends with his former coach and teacher in the early 2000s after the school dedicated a scholarship in his name. They and their wives would attend Orioles and Ravens games, go to the beach and travel overseas, including a trip to Italy, he said.

“If you asked Augie and Ange to do something, they were almost always a ‘yes,’ ” Mr. Bramble said. “They were always willing to step up and do things. They had the energy of people 40 years younger.”

Mr. Miceli loved his years at Calvert Hall, he told The Sun in a 2014 interview.

“I still love it,” he said. “I found a home when I started teaching at Calvert Hall, and I’ve enjoyed every year.”

In addition to his wife and son, Mr. Miceli is survived by two daughters, Nancy Miceli of Perry Hall and Angela Waple of Rehoboth Beach, Delaware.; and five grandchildren.

Viewings will take place from 2 p.m. to 5 p.m. and from 7 p.m. to 9 p.m. Tuesday at the John G. Noppinger, Jr. ‘64 Commons at Calvert Hall. A service is planned for 10 a.m. Wednesday at the Cathedral of Mary Our Queen, 5200 North Charles St., followed by a burial at Dulaney Valley Memorial Gardens, 200 E Padonia Road in Timonium.