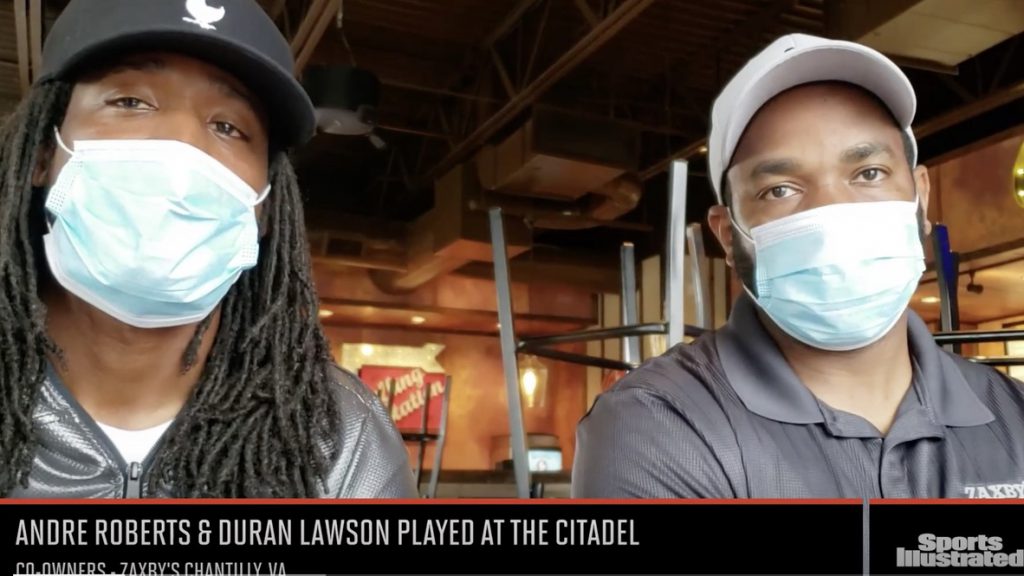 As seen in Sports Illustrated, by Chris Russell

Two friends and college teammates at The Citadel – one a quarterback and one that has been a 2-time Pro Bowler as a NFL receiver and kick returner, playing currently for the Buffalo Bills and in the past for the New York Jets, Detroit Lions, Atlanta Falcons, Arizona Cardinals and for the Washington Football Team, where I covered him.

An idea that came after a round of golf, simply because the two were hungry. One business with plans of a major expansion during a global pandemic.

Welcome to the wild ride that Andre Roberts and Duran Lawson have been on for the last 15 years or so.

As training camps around the NFL are set to open this week, one key part of a Super Bowl contender will have his attention focused on his day job because of the trust and belief he has in his teammate.

Together, while Roberts still maintains back-to-back Pro Bowl & NFL career on the frigid shores of Lake Erie, they are not only friends but they are business partners and co-owners of the first Zaxby’s restaurant in Chantilly, Virginia – a short drive from where Roberts used to apply his trade and where he makes his home.

Opening a business that is is not an established brand in a specific area (The first Zaxby’s in the expansive Northern Virginia area) is always a challenge but especially when you face a pandemic in the first six months.

Roberts along with Lawson had a sparkling new store built fresh for the pair as the first of what they feel will be a coordinated infusion of the Zaxby’s brand into a region that has over three million people living in the general area.

The new Zaxby’s restaurant, nestled in between a brand new gas and convenience store along with another strip of stores is the crown jewel of the overall project. Why?

Because it’s unique. Gas stations and Dunkin’ stores are all over but those that live in the immediate area have complained about a lack of restaurant choices.

Lawson and Roberts aren’t planning on stopping at one. They have a multi store agreement and are actively pursuing the next step.

While Roberts has to watch what he eats so that he can try and make a third straight Pro Bowl, Zaxby’s offers a wide array of chicken dishes and “Zalads” that are delicious.

So how does a quiet NFL star grade out as a partner and co-owner? There’s no All-22 film at Zaxby’s – just great teamwork between Roberts, Lawson and their crew.

NFL players know that their careers can end in very short fashion because of injury, so it’s obviously wise to have a backup plan.

I’ve worked with and covered some really smart players like Lorenzo Alexander, Kedric Golston and others. Both of those guys went into business together during their playing career. So did Pierre Garcon.

Roberts could have waited if he wanted until he was completely done but as they detailed, just getting one store up and running was a long journey. It helps to have someone you can trust to balance business and football.

When you go into business, you better believe in the brand. It has to be running through your veins and have a commitment level that far exceeds just a normal job.

It helps when that brand is something you’re passionate about and one that makes your tummy happy.

For Roberts and Lawson, they’re just getting started. It’s the first quarter and they won’t be stopped.