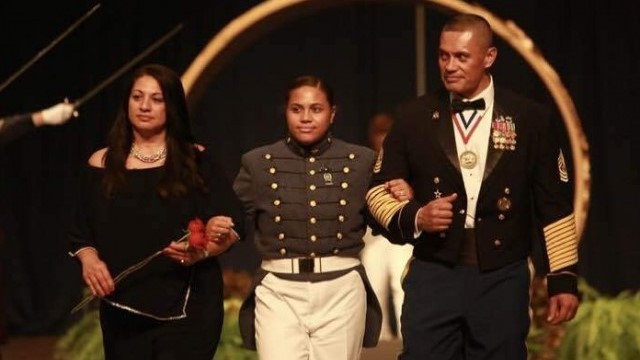 In 2016 AnaMalae Tia walked onto campus at the Citadel, a prestigious military academy in South Carolina, with her sights set on an Army commission in 2020. A member of a record-setting freshman class of 819 students, and one of the first to take on the rigorous nursing major, she knew the road to graduation would not be easy.

“I was sort of drawn to the challenge of it,” said AnaMalae. “Not a lot of girls go to the Citadel and that’s what drove me to work harder. And I wanted to go somewhere that no one knew my family so I could make a name for myself.”

AnaMalae shares her work ethic and her name with U.S. Army Garrison Stuttgart’s Command Sgt. Maj. Toese Tia. Most know him as a larger-than-life motivational force to be reckoned with. Anna knows him as “Dad.”

“Growing up it was always amazing to hear my dad’s heart come out when he would talk to his soldiers and motivate them,” said AnaMalae. “It’s one thing to just give an order but he always tries to give them a drive and a purpose. That’s been inspirational to me.”

On Oct. 6, Tia relinquishes responsibility as the garrison’s senior enlisted leader. With 31 years of service under his belt, Tia has led thousands of Soldiers around the world while raising a few at home. His daughter was the first in the family to commission in May. His son, Toese Jr. III, was right behind her, graduating from West Point in June.

The two officers are the newest in a long family history of service. AnaMalae believes the deeply rooted warrior ties of the Samoan culture have influenced many she knows to serve, but it’s the strong belief in taking care of others that led her to choose nursing.

“We have a saying, ‘it’s never blood that makes you family, it’s really love’,” she said. “My culture has taught me to respect others and my patients will always come first. I will treat them like family because no one wants to feel like a stranger. In the end it’s all about the relationships you build, no one can succeed alone.”

So far, the newly commissioned 2nd Lieutenant has found success in making that name for herself as she made the dean’s list 6 out of 8 semesters. She was recognized by Vice President Mike Pence during a ceremony at the Citadel for her outstanding work.

“It was an honor to hear my name announced,” she said. “Growing up whenever I heard someone say Tia, I knew they were looking at my dad. Now it’s my name, on my uniform and I know they’ll be looking at me. It’s a very proud but humbling feeling.”

The siblings are entering the Army’s playing field as their father prepares to say goodbye. The Command Sergeant Major will soon hang up his uniform after more than three decades of service. He said just knowing that he’s leaving the Army in capable hands, including a few he had the privilege of shaping at home, makes saying goodbye a little easier.

“They’ve been exposed to the challenges of the military and given a perspective that only a small percentage have,” he said. “They know the stresses that families go through and I hope they use that to their advantage as they make decisions to help folks.”

As a Soldier, Tia said he can’t wait to see what his daughter and son bring to the Army team. As a father, he said he could not be more proud of what they’ve already accomplished.