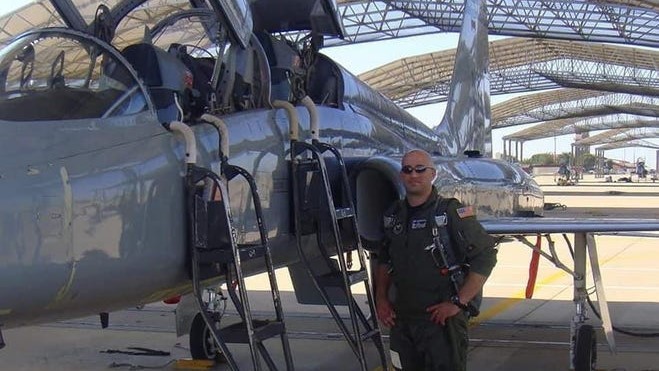 Note: Lt. Col. Eric Kut is a member of The Citadel Class of 2002. His brother, Kris Kut, Class of 2000, has worked at The Citadel as an assistant cross country and track and field coach and recruiting coordinator for 20 years. (Photo above courtesy of The Andover Township Volunteer Fire Department.)

As seen in the New Jersey Herald, by Kyle Morel

A Sussex County native was part of a U.S. Air Force crew that gained national recognition earlier this month for flying a record number of passengers on a single aircraft in a rescue mission out of Afghanistan.

Lt. Col. Eric Kut, an Andover Township resident and graduate of Pope John XXIII Regional High School, was the mission commander of the C-17 Globemaster aircraft that brought 823 passengers to safety from the Afghan capital of Kabul on Aug. 15.

A CNN article, citing information from Air Force spokesperson Hope Cronin, said the number of passengers is a record for a C-17 plane. The previous mark of 670 was set in 2013 during rescue efforts in the Philippines after Typhoon Haiyan.

Initial reports estimated there were about 640 civilians on the plane leaving Kabul but did not include 183 children sitting on adults’ laps. Sgt. Justin Triola, another member of the rescue crew, confirmed the updated figure during an interview last week from the group’s Joint Base McGuire-Dix-Lakehurst in Burlington County.

The plane on which Kut was stationed was not the one from a viral clip where Afghans fleeing the Taliban were seen running alongside the aircraft, with some clinging to the side of it, as it took off from the Kabul airport last week.

In a Fox News interview, Kut said his crew simply relied on its training in rescuing the people of Afghanistan and “making sure that we answer our nation’s call to deliver that freedom and that hope.”

“We were doing what we were trained to do,” he said. “We were focused on our crew position; we were making sure that everything was done, getting our checklist done, making sure that we could assess the situation and get those people safely and effectively out of there.”

Kut would not identify where the flight with the 800-plus civilians landed, saying only, “They went to a safe location, and that’s where I’ll leave it.”

The rescue became a local sensation after the Andover Township Volunteer Fire Department posted about Kut’s involvement on Facebook on Friday night. As of Monday afternoon, the post had more than 2,700 shares and hundreds of comments — some from people who were friends with Kut growing up or taught him in school — thanking the crew members for their service.

Kut grew up in Andover Township and graduated from Pope John, where he was captain of the football team, in 1998. He graduated from The Citadel in South Carolina in 2002 and has been in the Air Force for 19 years.

Although the 823 passengers far exceed the capacity limit on the C-17, reports have indicated that Kut and his crew will not face any disciplinary action for their decision to fly so many people.

Rep. Adam Kinzinger, a Republican congressman from Illinois who also served in Afghanistan as an Air Force pilot, said the group deserves more than just the assurance that they will not be disciplined.

“I hope there are awards that are going to go to the crew of that C-17,” Kinzinger said in a CNN interview. “They violated basically every Air Force regulation in packing that many people in there, and in the long run that’s going to end up saving a lot of people’s lives.”