Nai’Ryan Bookert’s journey to The Citadel: A group home, a new family and 8-man football 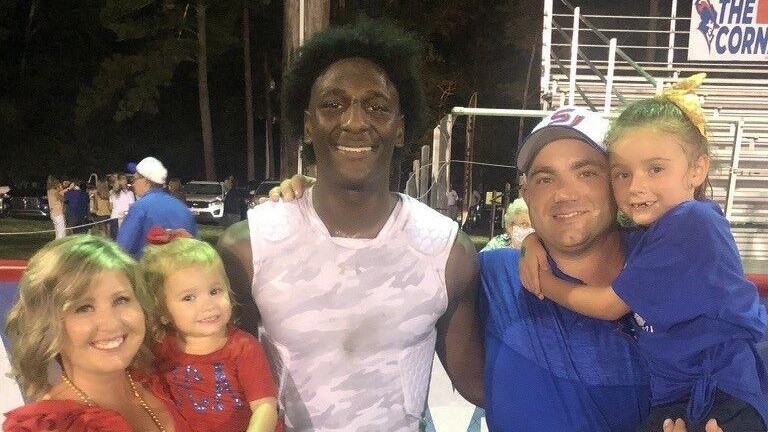 She was a 28-year-old mother of a young daughter, working in donor development and volunteer coordination at the Callen-Lacey Center for Children, a residential group home in Moncks Corner.

He was an 11-year-old with a big smile and an even bigger spirit, despite being separated from his birth mother and five siblings and already a veteran of several group homes across the state.

“He was so full of joy,” recalled Katie Tanner. “And he was so goal-oriented. He wanted to meet his goals, and he didn’t want life to hold him back, or his circumstances.

“He just had a joy that was contagious, and we just had that bond. Now, I know it was a God thing.”

That connection has grown over the years into a new family and new dreams for Nai’Ryan Bookert, who committed last week to play football for The Citadel. A 6-3, 210-pound two-sport star at tiny St. John’s Christian Academy, Bookert also had a preferred walk-on offer from South Carolina, conveyed in a phone call from Gamecocks coach Shane Beamer.

“I’m so happy that the Tanners took me in and put me in St. John’s,” Bookert said. “They’ve given me so much support. They’ve always been with me through everything and supporting me 100 percent, and I don’t know if I’d be in this position without them.”

The Tanner family, which includes father Jason and daughters Skarlett and Stella, formally adopted Nai’Ryan in 2020, an emotional end to a long struggle with the red tape and bureaucracy of the adoption process.

‘This is our kid’

That story really began when Jason Tanner decided he wanted to meet this kid his wife was always talking about. He took Nai’Ryan on a shopping trip for some football cleats and came away impressed.

“That was on a Saturday,” said Katie, now public information officer for the Berkeley County School District. “And on Sunday, Jason told me, ‘I really think this is our kid.’

“I asked him if he was serious, because I had always had a heart to foster and adopt. And he said, ‘Absolutely. Let’s get started.’”

Nai’Ryan was all for the idea, too.

“The first time I met the whole family, I was so happy,” he said. “It was hard, growing up, to adapt to different environments, and it’s still hard sometimes. I grew up with the mindset where I wasn’t going to let just anybody tell me what to do. But once I accepted (Katie) as my mother, it was lovely, and I really appreciate the way they have taken me in.”

When Stella, now 3, was born in December 2017, Nai’Ryan was at the hospital and held the baby in his arms. He moved in with the Tanners the next summer. But making things official with the S.C. Dept. of Social Services took a little longer.

“We actually had a pretty big challenge ahead of us with DSS,” Katie said. “We got some local media involved and they actually helped us. It took us over a year to get licensed. But now he lives with us, he went to St. John’s and the rest is history.”

Future at The Citadel

At St. John’s Christian, Bookert did a bit of everything for the football team, which played eight-man football until his senior year, when the team transitioned to 11-man football in the S.C. Independent Schools Association. As a quarterback, he passed for 1,897 yards and 16 touchdowns while running for 1,115 yards and 19 scores.

“He’s just a class A student-athlete, exactly what you’d want to get on your team,” Crowell said. “At our school, it’s K-3 and up through high school. He’s the guy that goes the extra mile to speak with all the younger kids and is a role model for all the younger kids.”

Of course, the jump from St. John’s Christian and playing eight-man football for most of his career to The Citadel is a big one. Crowell and St. John’s football coach Brandon Clontz are convinced Bookert can make it.

“He’s every bit as fast-twitch as some of the football roommates I had at Wofford, some of the running backs and receivers we had,” Crowell said. “I don’t know how The Citadel plans to use him, but at receiver he’s gonna bully people at the line of scrimmage. At linebacker, he’s gonna be as quick as any linebacker on the team. He’s just a natural playmaker.”

“I think he’s best suited defensively,” he said. “Outside linebacker, strong safety maybe. He can run, and he’s very athletic for how big he is. He’s a really competitive guy, and when he gets around more competitive guys, it’ll do nothing but help him.”

No matter the position, Bookert says he ready for the challenge when he reports to The Citadel this summer.

“I know I’ve got a lot of growing and learning to do,” he said. “I know I can’t just rely on my athleticism. But I’m old school. I’m not going to let anybody outwork me. And I like structure and order.