My ring story: where leadership and athletics meet 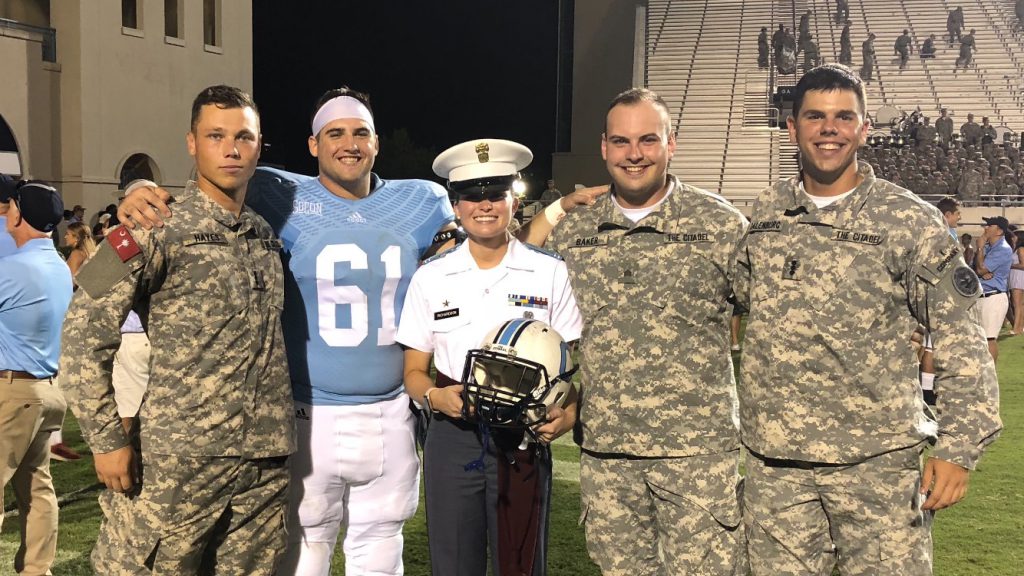 The amount of obstacles you have to deal with at The Citadel will make you into someone of extraordinary character, abilities and strength.

One of my goals during my cadet career has been to unify the Corps and athletes, or “Corps Squad.” I believe the relationship between the two groups has gotten a lot better since my knob year. I think it comes from athletes caring more about being part of the Corps, and the Corps learning how hard it is to be a cadet athlete at our school.

My TAC Officer, Captain Wouter Sijtsma, Royal Netherlands Air Force, has been the most instrumental in my success here at The Citadel. He told me that I absolutely could be a company commander and that I should go for it. I did not think it was possible for a cadet-athlete, but Captain Sijtsma gave me the confidence to achieve the leadership position. He has been a mentor to me my whole time here and has believed in me even when I did not believe in myself. He opened my eyes to the possibilities and guided me on the way.

There is no place that compares to what The Citadel can offer you. It gives you the chance to become the best person you can possibly be. I changed a lot as a person here at school. When I was in high school I was not organized at all. I was a mess. The Citadel taught me how to be organized and efficient with my space. It taught me discipline in every sense of the word.

The ring means everything to me. It’s a symbol of struggle and strife — it is a badge of honor. The ring is far more valuable than the gold it is made out of. The Citadel Ring is infused with the Corps’s values of honor, duty, and respect, as well as our honor code: “A cadet does not lie, cheat or steal nor tolerate those who do.” That is something I take very seriously. The ring shows that you have passed the test.  It means you went through the four hard years of blood, sweat and tears. It means you have conquered the mountain named The Citadel.

I could have gone to different colleges and universities for football. But I chose The Citadel because I did not want to go to a normal college. I didn’t just want to play football; I did not want a normal college experience. I wanted to be challenged at the highest level. I chose The Citadel because I wanted to be a part of something special, something more, something challenging and difficult, something that would mold me to become the best man I can be. And that is exactly what I have gotten at Our Mighty Citadel.

Cadet Mark Matthew Weakland is from State College, Pennsylvania and is majoring in Education Social Studies. He is serving as the company commander of Romeo Company and plays as an offensive lineman for the Bulldogs football team.