Members of the Corps of Cadets seek “a more perfect union” 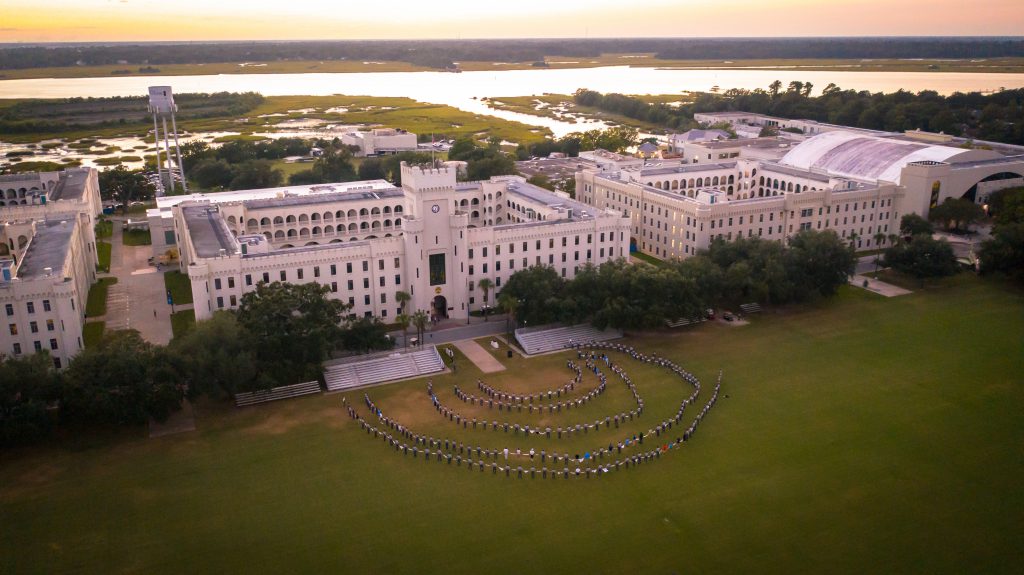 Five rings on Summerall Field — made of members from The Citadel community, linked together — are a visual representation of what unites members of the South Carolina Corps of Cadets.

At 7 p.m. on Wednesday, October 7, cadets gathered and stood together, using a physical connection to highlight their camaraderie. To maintain social distance, the cadets connected themselves with spirit T-shirts, each holding a separate side.

In addition to the Corps, members of The Citadel faculty and staff attended to show their support.

Those who attended the Unity and Respect event — designed by the Corps, for the campus community — were responding to an email sent by Cadet Hayden Brown, captain for The Citadel basketball team.

Brown and other members of the Corps worked together to write a statement to explain the purpose of the Unity and Respect event.

Regimental Public Affairs Officer Cadet Ruby Bolden read that statement during the event, on behalf of those attending.

Despite all national attention and conversations surrounding inequities in our country, many remain apathetic. As the South Carolina Corps of Cadets, we are unified in our belief that no member of the Corps is any more important than another. Our core values are honor, duty, and respect; our honor is tested by how we respond to acts of injustice and the empathy we share with others. Without respect for one another, we will fail – as future leaders, as a nation, and as a people. We will stand on Wednesday, linked together, with the intent to form a more perfect union. As cadets who have come to The Citadel to pursue our education and develop into principled leaders, we believe we should empower and support each other, and every member of our community. Every member.

After, Bolden joined her classmates and stood in silence for a few moments before delivering the concluding remarks:

“Life is a race. It requires endurance — it requires grit. Life is also a race that cannot be run alone. When life’s challenges end, another one is peaking over the horizon. The person to your left and right has taken the initiative — the commitment — to see you through your struggles, just as you will for them. We do not stand alone. We live to embody the values of honor, duty and respect. We will forever remain committed to these core values, not only for ourselves, but also for those beside us.”