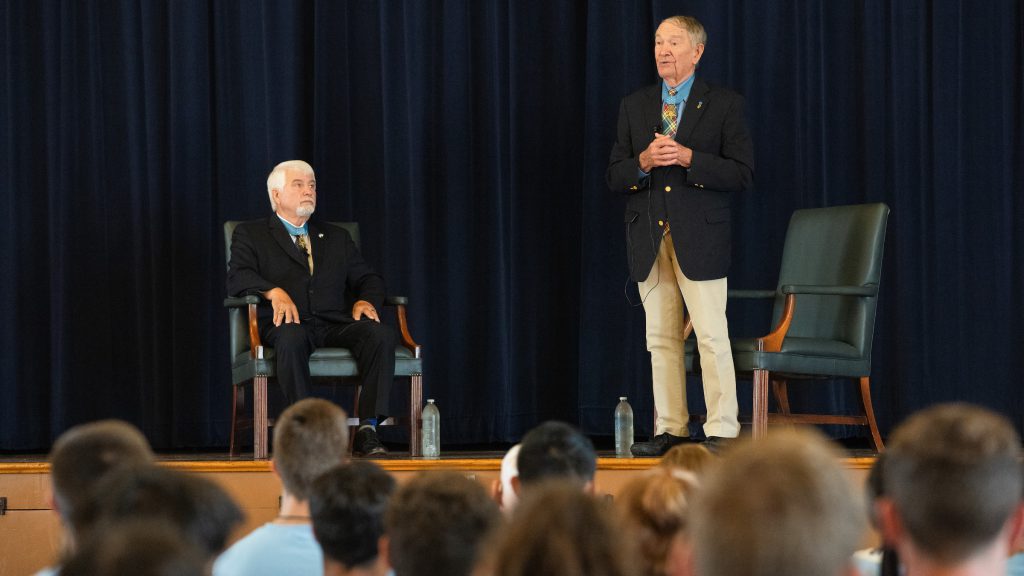 As seen on WCBD-TV, by Forrest Tucker

“Take care of your troops. You take care of them and they’re going to take care of you,” said Marm, who left from Charleston to fight in Vietnam in 1965. “Just do the best you can, lead by example and don’t ask your men and women to do anything you wouldn’t want to do yourself.”

“If you realize that nobody in this room is better than any other person you will have success in life,” said McCloughan.

The two recipients, and many others, are in Charleston for the Congressional Medal of Honor Society’s Citizen’s Awards. They were greeted with rounds of applause from the future freshman, who will return to campus shortly for Matriculation Day.

“It’s just such a great opportunity to see what the epitome of servant leadership looks like,” said Senior Cadet Jacob Garrett, who is in his second summer leading a squad of future cadets in the Citadel Success Institute.

The program that Marm and McCloughan were dropping by for is a summer transition program to prepare future cadets for life at the Citadel.

Garrett says that future and current cadets learn many lessons from having Medal of Honor recipients come to Charleston.

“Leadership is never about you. It’s about serving those around you. Secondly, the right thing is never the easiest thing to do,” said Garrett.

Marm’s message to the incoming cadets is to do the best they can when they are called to lead.

“I hated war, but I loved my troops. That’s very important,” said Marm.