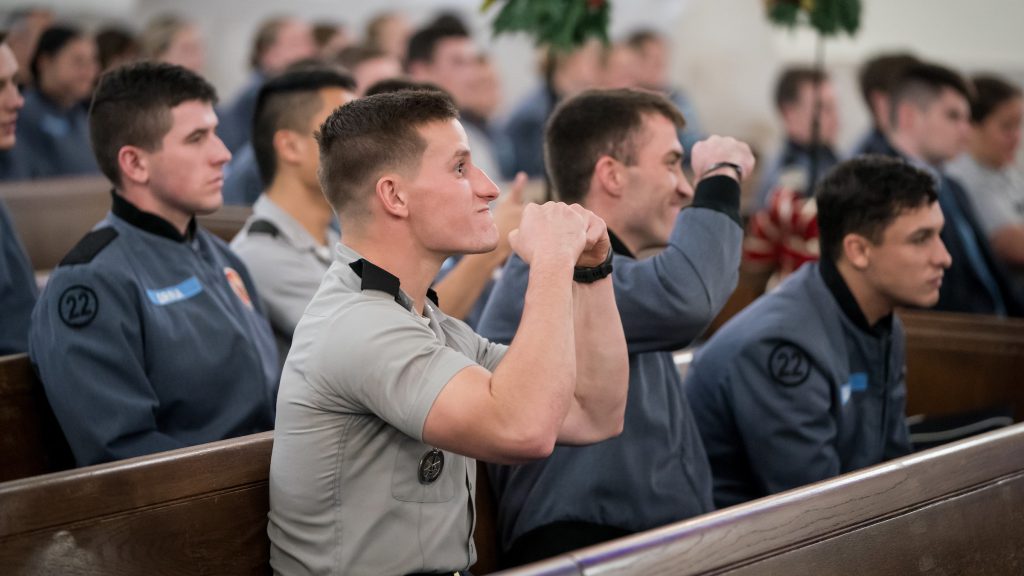 Nearing the mid-point of their senior year, more than 70 cadets at The Citadel now know what branch of the Army they will enter after graduation.

The soon-to-be Army officers received their branch assignments during a ceremony on Dec. 1 in Summerall Chapel.

“Branching Intelligence is something I have dreamt of for years. It was a surreal experience facing my peers with my branch insignia pinned to my uniform,” said Cadet Angelea Lance. “It has taken me one step closer to fulfilling my sense of duty and becoming a leader in my community, something I feel ready to do because of the training and experience The Citadel has provided me. I am honored to be commissioning with so many of my brothers and sisters in May of 2022.”

“Growing up, I knew I wanted to serve my country and I felt it was my duty to contribute to society by being in the military,” Lance continued. “My father heavily influenced this deep sense of pride in nation and service, as he spent 27 years in the Army as both an Infantryman and an Aviator. His service allowed us to see the world and appreciate the family the military provides. I knew this was the life I wanted.”

About 70% of the cadets received their first choice when it came to branch. Almost 90% received one of their top three choices.

A future of service

“I’m very excited to have branched Armor — it was my number one choice and is something I have dreamed of doing since I was a little kid,” said Cadet Aidan Brady. “Being a part of the Corps of Cadets taught me how to deal with a lot of stress and not a lot of time, and still find a way to get the job done to the best of my ability. The Citadel has opened so many doors for me in the Army and I am extremely excited to see where they take me.”

“I feel like Field Artillery is a great opportunity to hone in my skills and leadership abilities that The Citadel has prepared me for,” said Cadet Brandon Lawson, from Woodbridge, VA. “I’m looking forward to leading soldiers and making the most out of this opportunity.”

On the way to becoming an officer

The Citadel offers a variety of majors to prepare cadets and students for their future careers, both in and out of the military. Intelligence and Security Studies is one of The Citadel’s most popular undergraduate degrees. Other top programs include Cybersecurity and Computer Science, Mechanical Engineering, Civil Engineering, Marketing and Business Development, Criminal Justice and Political Science.

The 72 senior cadets are part of The Citadel’s Army ROTC program, known as Palmetto Battalion. It’s one of the five largest Army ROTC programs of the 275 across United State Army Cadet Command.

“I am extremely excited for the opportunity to serve my country, and an even more grateful to serve in the capacity of a Medical Service Corps Officer,” said Cadet Jaret Price. “Medical Services was my number one choice to commission in for the Army, and I can’t wait to get started on what I plan to be a 20-plus-year career.”

These cadets — as well as cadets from Air Force/Space Force, Navy and Marine Corps ROTC departments — will accept commissions as officers in the U.S. Armed Forces in a ceremony scheduled for Friday, May 6.

Each year, approximately one-third of the South Carolina Corps of Cadets accept commissions to become officers in all branches of the military.

Apply to join the South Carolina Corps of Cadets here.