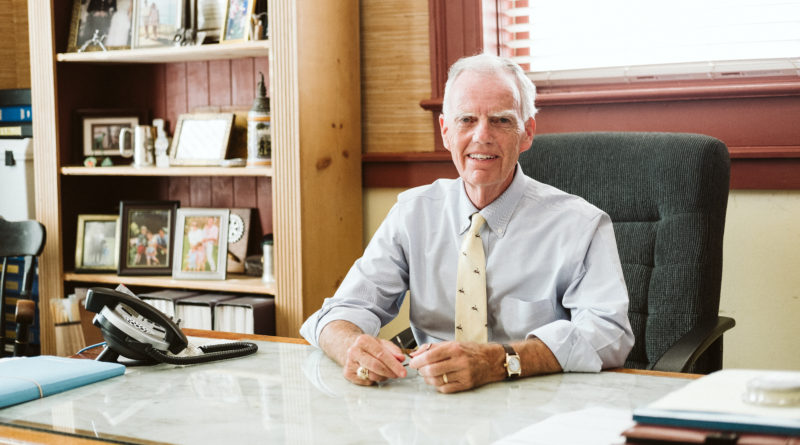 As seen in Beaufort Lifestyle
By Nathan Livesay, photos by Greyson Johnston

Because of our proximity to Charleston, many of The Citadel graduates make their way to Beaufort. An easy way to spot a graduate of The Citadel is to look for the ring. Because so much more than just taking classes goes into finishing one’s education at The Citadel, a rich tradition, and long, storied history have developed around the ring that The Citadel graduates are able to wear.
It’s a unique design that makes it easy to spot and you will find that many former cadets don’t leave home without their ring and they wear it with great pride. One of the people in Beaufort who wear the ring is James “Jim” Grimsley, III.

Jim Grimsley is a graduate of The Citadel who has lived in Beaufort for the last 43 years. He and his wife, Josette, have been married for 50 years and have three adult children. He is a partner at the Tupper, Grimsley, Dean & Canaday Law firm located downtown on the corner of Carteret and Bay overlooking the Beaufort River and Woods Memorial Bridge. Born into a military family and having served as an officer in the United States Army, Jim has lived in many different places all over the United States and the world before settling into Beaufort with his wife and child in 1976. His family has South Carolina roots, with his parents hailing from Florence and his father being a 1942 graduate of The Citadel. Incidentally, his father returned to The Citadel and served as President of the College from 1980-1989. Jim graduated from The Citadel in 1968 and served for five years as an Infantry officer in the United States Army. His service took him to Vietnam and Germany and, after fulfilling his military commitment, he entered the United States Army Reserve where he would serve until 1988. He decided to attend Law School at the University of South Carolina in 1973.

Jim attended The Citadel from 1964-1968, largely to prepare for a career in the military, but he was also drawn to the camaraderie and friendships that would be developed by enduring the challenging crucible of daily life at The Citadel. Jim pointed out that life at The Citadel can be a grind, but those who attend are sure to learn or have reinforced, a sense of duty, personal responsibility, empathy, respect and honor. The Citadel cadets also develop close and long-lasting relationships and, upon graduation, become part of a tight-knit and wide ranging alumni network resulting from the shared and valued experiences had by all of The Citadel graduates over the decades.

Instilled by his parents with a sense of service that was cultivated during his time at The Citadel, Jim has been an active part of the Beaufort community over the past 40+ years.
In addition to his successful law practice, Jim has served as Municipal Judge for the Town of Port Royal since 1985. He served as the President and Secretary of the Sea Island Rotary Club and named Rotarian of the Year three times. He has served in various roles with St. Helena’s Episcopal Church as well as holding board positions for the Greater Beaufort Chamber of Commerce Board and United Way of the Lowcountry. He received the Greater Beaufort Chamber of Commerce Lifetime of Leadership award in 2005, and in 2018 was awarded the Order of the Palmetto by Governor McMaster. He has also been active in organizations supporting public education and youth athletics while finding time to serve on the faculty at The Technical College of the Lowcountry’s paralegal program.

When asked why he chose to devote so much his time to civic and philanthropic organizations, Jim answered quickly, “I think it is truly important that everyone give back of himself or herself to the community in which one lives. It’s just part of claiming your little corner of the world, wherever that might be, and trying your best to make it a better place…. My siblings and I got that sense of service primarily from our parents…. they consistently looked beyond the day-to-day and were always fully engaged with the community – wherever they may have lived.”

When asked to reflect on what prospective students should know and what they have to gain by, choosing to attend The Citadel, Jim explained it this way, “Not everyone can go and not everyone should go; it’s not for everyone and is certainly the ‘road less traveled’, but it is quite a special place. The Citadel experience will imbue one with a concept of duty, responsibility, empathy for others and loyalty; it will engender in you a sense of respect for others and an ability to set priorities, all of which are important steps toward to absorbing the concept of leadership. We like to think of it as a ‘leadership laboratory.’ The Citadel has a significantly unique and cadet-enforced and administered honor code: every cadet learns on his/her first day that a cadet does not lie, cheat or steal, or tolerate those who do. The Corps of Cadets resides in very close quarters, and the members of one’s class develop very close relationships with classmates by virtue of enduring a very arduous process, while concurrently carrying a full academic load. You get a sense of teamwork, and very quickly learn that it’s not just you yourself, because ‘you yourself’ simply won’t make it.”

Jim also pointed out that while the benefits are obvious for those who are preparing to make a career out of the military service they are not limited just to those who want to go on to military service, “ . . . because those that go the civilian route will find that civilian employers tend to lean toward The Citadel graduates because prospective employers value and desire the traits that The Citadel education provides: essentially an employee with a high sense of integrity, coupled with an innate ability to effectively deal with people and how to get things done in the right way.”

Jim is also an active member of The Beaufort Citadel Club. This group of The Citadel graduates that meets at least three times a year with a specific purpose for each meeting. In March, the Club gathers in honor of the founding of The Citadel in 1842, and to honor all The Citadel graduates that have died over the past year. In their second meeting the Club hosts and meet with representatives from The Citadel’s Athletic Department and coaches to talk about their seasons and what they can expect in the future. The third meeting is referred to as “Knob Night” when the Club invites students (and their parents) from Beaufort County and the surrounding areas who are planning to enter The Citadel in a few short weeks to join Club members for a meal and time of celebration that they will soon be on their way to starting the process of earning the right to join all Citadel graduates in being able to one day proudly wear the ring, and ultimately becoming a member of the “Long Gray Line” of alumni.