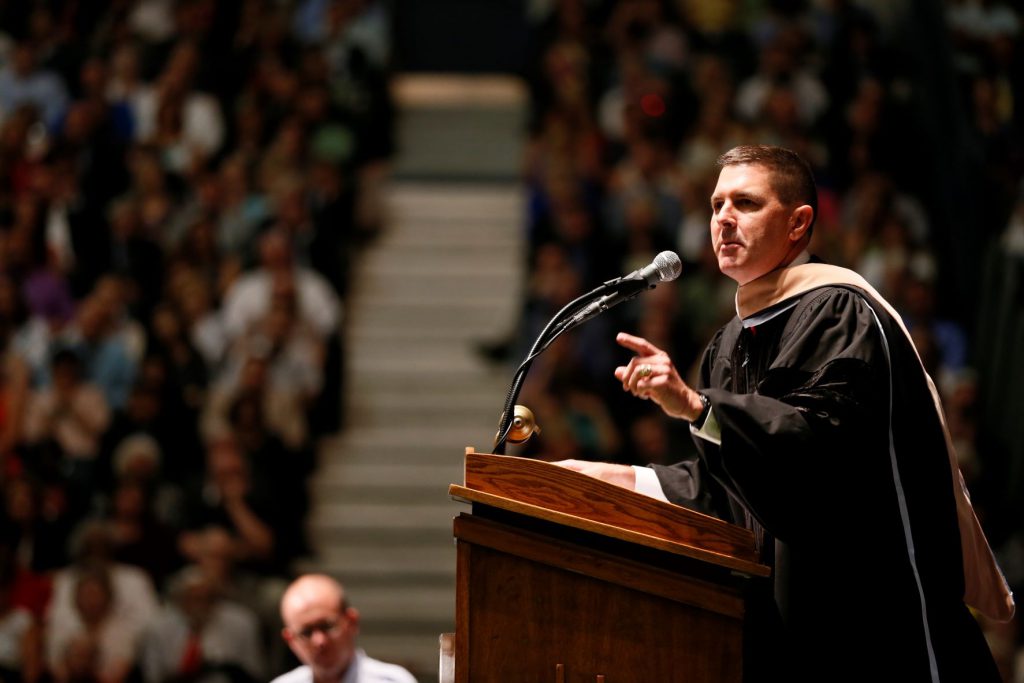 As seen on APnews.com

Note: Keller Kissam was Regimental Commander of the South Carolina Corps of Cadets in 1988, graduating with a degree in Business Administration. He has received the Order of the Palmetto and has served his alma matter in numerous volunteer roles in addition to providing a Greater Issues speech for the Corps in 2012 and serving as the Class of 2015 commencement speaker, (photo above) for which he received and Honorary Doctorate of Business degree. Kissam is also a member of the Baker School of Business Hall of Fame.

“Don has served Dominion Energy and our predecessor company, Consolidated Natural Gas, with distinction for 36 years. Don has been a titan in the natural gas field – leading in transmission marketing, LNG, midstream operations, distribution operations and more – most recently as chairman of the Southern Gas Association. He has been an outstanding contributor to Dominion Energy’s success. We wish Don well in his retirement.

“Rodney and Keller have worked together to guide Dominion Energy South Carolina through a transition from SCANA to Dominion Energy and through a recent rate case that allows the utility to focus on serving our South Carolina customers safely, reliably and efficiently. Rodney’s experience in running a regulated utility and Keller’s exceptional leadership abilities will serve them well in their next roles.”

Raikes joined Consolidated Natural Gas in 1985. In 2006, he became vice president-Transmission Marketing & Business Development, and in this role he skillfully led the team that was responsible for the commercial growth of the Cove Point LNG terminal in Lusby, Md. In 2014, he was named vice president-Pipeline Customer Service & Business Development. Three years later, Raikes was promoted to senior vice president-Dominion Midstream Operations, and in February 2019 began overseeing operations of the company’s portfolio of natural gas terminaling, processing, storage, transportation and related assets. He was named president of the Gas Distribution operating segment in October 2019.

Blevins came to the company in 1987 as an associate engineer at what is today known as Dominion Energy Virginia, after graduation from Virginia Tech. In 2006, he was promoted to vice president-Electric Operations at Dominion Energy Virginia, where he oversaw operations of the utility’s electric distribution assets. He became senior vice president and chief information officer in 2014. Blevins has led the Dominion Energy South Carolina natural gas and electric utility since 2019. He serves on the board and executive committee for the South Carolina Chamber of Commerce, as well as the boards for the Charleston Chamber of Commerce and the South Carolina Manufacturers’ Alliance.

Kissam joined one of Dominion Energy’s predecessor companies, SCANA, in 1988 as a new utility professional and has held numerous positions in both electric and gas operations. At SCANA, he led gas operations from 1996 to 2004, and electric operations for South Carolina Electric & Gas since 2003. Kissam assumed his current position in 2019. Kissam holds a bachelor’s degree from The Citadel, where he served as Regimental Commander of the South Carolina Corps of Cadets. He is a board member and past president of the Southeastern Electric Exchange and the immediate past president of the South Carolina Independent Schools Association, and serves as chairman of the board of The Central South Carolina Economic Development Alliance.

For biographies of these executive officers, please click here.