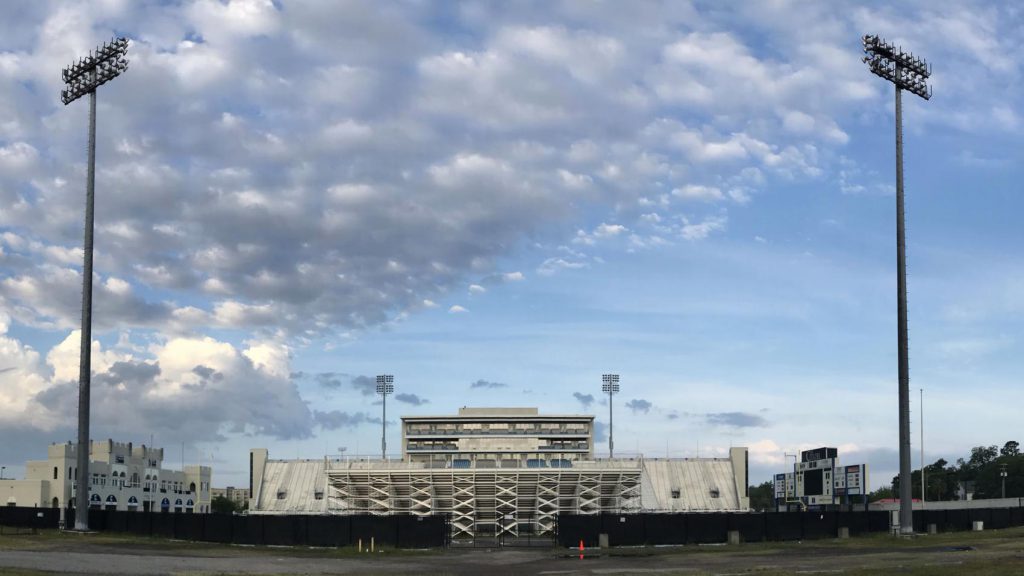 The Citadel will form a committee to study campus structures named for historical figures, including the military school’s football stadium.

Citadel president Gen. Glenn M. Walters announced the committee in a message to the campus earlier this month. In June, The Citadel’s African American Alumni Association renewed its call to change the name of Johnson Hagood Stadium, which is named for a Citadel graduate and former South Carolina governor who also was a Confederate general and slave-owner.

“Last week I met with our faculty and committed to establishing a committee to further study historical figures for whom structures are named,” Walters said in his July 6 message. “We must understand the facts and the context surrounding their entire lives, to include their service to The Citadel and their communities. We will share our findings and openly discuss them. We will not hide or shy away from learning about and discussing our history — all of it.”

“Gen. Walters is a guy that has truly made a difference, and this is a step we definitely needed,” said Alexander, a 1982 Citadel graduate who played football for the Bulldogs.

“We’re just proud of the fact that the school is taking necessary steps to look at these structures,” he said. “Nothing is in concrete right now, but as a great leader you have to look at all the resources you have. If there are opportunities, there are people who will step up and take the necessary action to make this happen.”

In his statement, Walters cited recent events, including the death of George Floyd and the fifth-year anniversary of Emanuel AME shooting in Charleston. Myra Thompson, who earned two masters degrees from The Citadel’s graduate college, was among nine worshipers killed at Emanuel AME in 2015.

“Racism negatively affects us all,” said Walters, who also remarked on a recent Post and Courier article about the experiences of black Citadel football players. “As a college whose mission is to educate and develop principled leaders, The Citadel holds an important role in addressing and eliminating racism. We will discuss racism openly and take substantive actions to eliminate it.”

Walters noted that the school is bound by the state’s Heritage Act, a state law that forbids removal from public property of flags or memorials for any war, historic figure or event without a two-thirds vote of the Legislature.

The Citadel already has tested the Heritage Act with regard to the Confederate flag hanging in Summerall Chapel on campus.

In 2015, The Citadel’s Board of Visitors voted that “the Confederate Naval Jack should be moved from Summerall Chapel.” The Citadel followed up with a letter to the Speaker of the House, who replied that “the General Assembly has completed its consideration of the issue and the matter is considered settled.”

“Anger and sadness about incidents of racial injustice fuel more friction,” Walters said. “Many in South Carolina debate the Heritage Act, restricting any changes to public monuments or structures dedicated in memory of historical figures or events. I hear from many of our Citadel family members on both sides of the issue. Almost everyone agrees we should not try to change our history, and should not fear it. We can use those unifying sentiments to move forward together.

“We are not at liberty to unilaterally change the structures protected by the Heritage Act, and The Citadel is committed to always follow the law. We can research these historical figures and learn of decisions they made, actions they took, and the ramifications.”

Walters said a lot of that work has already been done as part of The Citadel’s involvement in a 40-school consortium called “Universities Studying Slavery.”

As it turns out, The Citadel’s football stadium was not named by the school itself, but by the City of Charleston.

In 1927, after the city built the stadium, some members of city council wanted to name it after the mayor at the time, Thomas P. Stoney. But Stoney, according to an article in the Charleston Evening Post, declined the honor and insisted it be named for Johnson Hagood.

“The name Johnson Hagood stands out in the history of this state and nation, the mayor declared,” according to the article. “And he would not consider any other name for the stadium.”

Walters said that The Citadel has “an opportunity to do this right as an institution and as a Citadel family.”

“As we advance inclusive excellence in our campus community, it will not always be easy, and it will not be perfect,” he said. “We must address this issue with grace and empathy for each other, and in alignment with our core values of Honor, Duty and Respect.

“This opportunity of ours must have our personal attention — every one of us.”