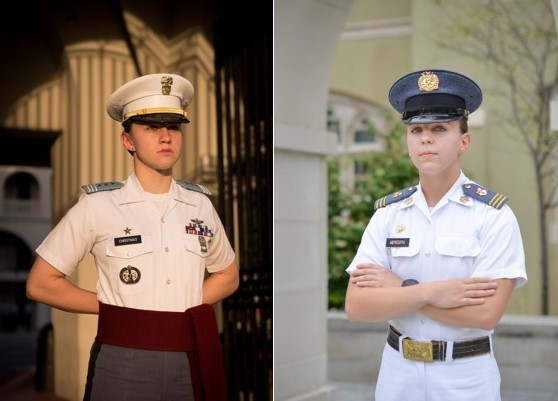 Two of America’s Senior Military Colleges will recognize a historic moment this weekend during events at The Citadel in Charleston, South Carolina on Saturday, Oct. 2.

It is the weekend Citadel seniors are presented with their rings, Parents’ Weekend, and The Citadel is also hosting Virginia Military Institute (VMI) on campus for the annual SoCon Military Classic of the South football game.

The confluence of events will provide the opportunity for the regimental commanders of both institutions to meet in person for the first time, and for a formal recognition of the first year in history when both Senior Military Colleges’ Corps of Cadets are being commanded by women.

The commanders will be formally introduced by the announcer Saturday morning during The Citadel Parents’ Weekend military review parade at 11:00 a.m. when the women will exchange mementos.

Additionally, the two commanders will meet on the field during a break in the football game to greet the audience. More information about the weekend events can be found here.

Members of the media are welcome to cover either event.

The media section during parade is the roped off between the bleachers on Summerall Field which can be seen on the college’s virtual map. Please note that on campus parking will be difficult. Spaces can be reserved in advance by emailing kkeelor@citadel.edu by Friday at noon.

Media wishing to cover the game must have press credentials from The Citadel Athletics department to enter Hagood Stadium. Please call (843) 953-6795 by Friday at 2 p.m. to request credentials.

A digital news release with photos and uncut b-roll will be available Saturday afternoon and can be requested by emailing kkeelor@citadel.edu.

Questions about VMI and Cadet First Captain, Kasey Meredith should be sent to wyattwj@vmi.edu.