From the Corps to the Chapel: Meet Chaplain Aaron Meadows 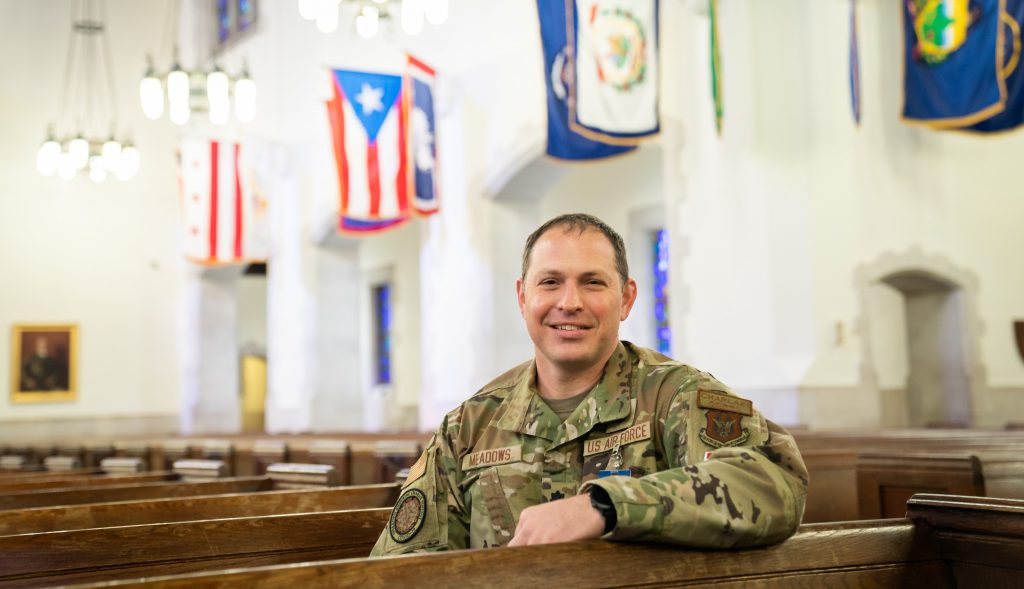 “Remember Now Thy Creator in the Days of Thy Youth”

Those old words above Summerall Chapel greeted the new Chaplain to the Corps of Cadets, Aaron Meadows, a member of the Class of 2004.

The former cadet, and current Air Force reservist, will now serve his alma mater as the Chaplain to the Corps of Cadets.

Meadow’s role will involve tending to the spiritual needs of cadets, alumni, faculty and staff and also serving as a community leader, bringing religious leaders from different faiths around the city together for worship and fellowship. He also leads celebrations, such as the annual Christmas Candlelight Services, and the celebrations of the lives of the many people who request to have funeral services in the chapel.

How many years have you served in the military?

I graduated from The Citadel in 2004 and accepted a commission that May — so May of this year will be 17 years in the U.S. Air Force Reserves.

Why did you join the military?

I actually grew up in a military family — a Navy family — and I applied here my junior year. I got in, and I didn’t apply anywhere else.

My family could not pay for me to come to college, so I had to have some kind of scholarship, and I ended up getting a four year Army scholarship. My sophomore year, I switched from Army to Air Force but was able to maintain the scholarship.

Why did you want to become a chaplain in the Air Force?

My junior year, when I was doing campus ministry as a cadet — I was involved here in the chapel, went to Campus Crusade, Baptist Collegiate Ministry, Charleston Wesley Foundation and several other campus ministries — God was calling me to ministry as a chaplain, so that’s when I switched. I had to go through a ton of hoops because there was no process to go from an active duty commitment to a reserve commitment at that time, and I was told it wouldn’t happen. But God just opened up a door and I was able to take a reserve commitment so I could go to seminary.

So I left The Citadel, went to seminary, and enrolled in the Chaplain Candidate Program. I became a chaplain, and I’m still an Air Force Reserve chaplain with the 315th Airlift Wing, stationed at Joint Base Charleston. Then God opened up the door for me to do campus ministry, which I’ve done with the Methodist Church for seven years. I am transitioning out of that to fully focus on my work here on campus.

Why have you stayed in the military?

I feel like God has given me the gifts and graces to do ministry in the military as a chaplain. I love caring for people, I love being able to meet people at the best of circumstances and — not that I love this part, exactly — but I also get to help people at their lowest, as well as people in the middle, too. And I get to do that from a perspective of faith.

As a Christian minister, I get to lead worship, I get to help people grow in their faith as Christians. As a chaplain I get to do this for everyone, for people of many faiths and beliefs. I get to help support others in their faiths or even those who have no faith at all. I get to be that person who’s there for them. That’s a big reason I’ve stayed in the military, but also why I wanted to do the chaplain job here at The Citadel.

What is the most defining moment of your service to date?

I think it would be all the times I was able to help multiple people — not just one person or moment. I feel like, for people who were at a low point of their life, or who’re completely lost and directionless, I was able to be a part of helping them get from where they were to where they needed to be — to a healthier place. God put me in the right place at the right time to help.

What does being an Air Force reservist mean to you?

I think that the beauty of the reserve world for me is that it lets me stay connected and be a part of the military, doing all the things I love to do there. I was initially planning on going active duty in 2010. I’d just started at a church in North Charleston that was struggling, but God started doing some really cool things, the church was growing and I thought, ‘I can’t abandon this ministry to go active duty.’ So I stayed in the Air Force Reserve.

What it’s allowed me to do is keep that military connection. That has opened up so many doors, even getting to work here at The Citadel. I get to do military ministry and to fulfill that part that I love, as well as staying connected to the church ministry and the civilian world. It’s allowed me to stay grounded in two, often, very different worlds.

What leadership qualities did you learn in the military that have helped guide you through your career and life?

There’s an important role that’s played by the military, so I think bringing that attitude, the understanding that sometimes you have to dig in and work hard, shows how there’s something valuable about sacrificing and working hard for the benefit of the whole. So I think those things — like adversity, discipline, getting yelled at — build the military attitude that’s part of making changes and breaking down barriers.

As an alumnus, what does it mean to you to take on this position?

I think that, when I walk around meeting cadets, they see me as just some 40-year-old balding guy — until they see my ring and say, “Wait a minute, you went here,” and then there’s an instant connection. We’ve done something similar.

As a cadet, I was a cadre corporal, squad sergeant, platoon sergeant, battalion recruiting master sergeant, regimental religious officer, on the honor committee, wrestler in my knob year — all those things I did as a cadet are now how I can better relate to current cadets.

Cadets know that as a graduate, I can relate to the fact that SMIs suck, or that I understand that morning PT isn’t always fun. I feel like I can understand those things in a way that I couldn’t if I hadn’t gone here. I feel like God’s gifted and graced me to support these young men and women and help transform their lives, specifically from a spiritual and faith-based aspect, for those who choose to engage there. But also for those who don’t, I think that I have an opportunity to help them in a positive way outside of the concepts and components of faith. That brings me joy — I feel like that’s a part of how God wired me.

What do you hope to accomplish as Chaplain to the SCCC?

I really want to be a part of growing the specific chapel ministry so, on campus, kids can grow in their faith and that part of their life for those who want to. We’re part of making this campus what it should be so that all students can come, thrive and leave here as better people.